Review: A Shot In The Dark by Lynne Truss 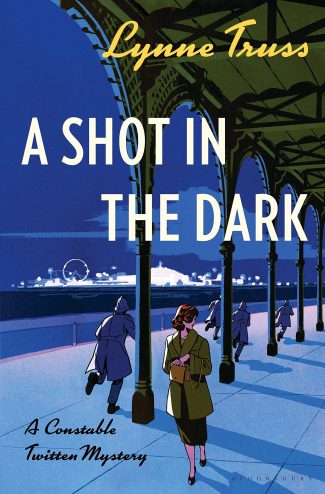 A Shot in the Dark

A Shot in the Dark is a wryly entertaining new crime novel from Lynne Truss, New York Times bestselling author of Eats, Shoots and Leaves.

Inspired by a visit to London’s famed Detection Club, Lynne Truss took the characters of her popular radio serial Inspector Steine and wrote this hilarious novel of bumbling policemen and scheming criminals in the British seaside resort town of Brighton in 1957. Six years earlier, Detective Inspector Steine had arrived in Brighton and, to some extent, overseen the extermination of its two largest criminal gangs, an event celebrated in the popular eye with a movie that helped cement Steine’s status as one of Britain’s favorite policemen. Unfortunately, this success has convinced Steine that crime has been eradicated for good from Brighton, no matter what cases his right-hand man, the long-suffering Sergeant Brunswick, brings to his attention.

The arrival of the annoyingly clever young Constable Twitten is galvanizing, bringing equal parts hope to Brunswick and dread to Steine:

Because the point was this: Steine loved the law, but he found the entire concept of criminals morally repugnant. When he adopted the famous far-away expression he was not (as all supposed) thinking deeply: he was strenuously attempting to place himself in a calm green place beside a tinkling stream, with kingfishers flashing overhead and a snatch of Elgar on the breeze. It suited him perfectly to believe that, in a single afternoon, all the serious criminals in Brighton had killed each other, leaving the town crime-free for ever. Policing for him was about upholding the law and protecting the public, not dealing with unprincipled louts who would shoot you as soon as look at you.

As such Steine tries to fob off the young man as quickly as possible, giving him such unsavory tasks as babysitting an unpleasant visiting theater critic who also happens to have information about a decades-old robbery. Sitting in the darkened Brighton Theater Royal as a new play debuts, A. S. Crystal is about to tell Twitten the identity of the criminal mastermind when a shot rings out, leaving Crystal dead and Twitten more determined than ever to bring the criminals of Brighton to justice.

Oh, this novel was such a delightful romp through a Britain of yesteryear…

For, besides the murder of the unpopular Crystal and the armed robbery from ten years back, there has also been a recent rash of burglaries, on top of the occasional unsolved grand theft and assault and other crimes Steine has been only too happy to dismiss as completely unsolvable and thus best not lingered over. As Twitten and Brunswick investigate, they find themselves the targets of an ingenious crime boss who will stop at nothing to preserve a comfortable hold on power born of years of Steine’s incompetence.

Oh, this novel was such a delightful romp through a Britain of yesteryear, reminding me in equal parts of a more serious P. G. Wodehouse and a less bleak Alan Ayckbourn. Any fan of the dark comedies of mid 20th century British theater will be hard pressed not to be amused by passages such as this note allegedly written by Crystal’s murderer, claiming to explain the reason for the shooting:

A dear friend of mine was driven to suicide by Crystal, just ask Luigi, and I personally feel a deep and abiding grudge against the vile man which I can never overcome, coming as I do from Yorkshire where we can’t help it. I am confessing because I do not want police time wasted in following up other fanciful lines of enquiry, however plausible they might look at first glance. The killer is me, and I act alone, using a gun that no one knows I’ve got. And damn the man to hell, I say, because I am known not to mince my words and to write hard-hitting northern plays and so on.

Of course, anyone with an appreciation for dry wit and intelligent plotting will enjoy this first novel in the Constable Twitten series, which Ms Truss wrote with a firm adherence to the stringent requirements of the Detection Club, to play fair with readers and eschew all manner of logical fallacies in the construction of this clever mystery. It’s a wonderful addition to the comic crime subgenre and just a really fun read.