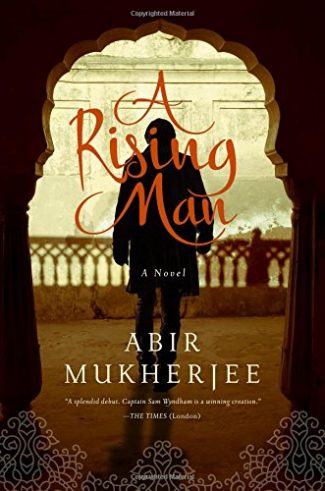 A Rising Man by Abir Mukherjee is the 1st novel in the enticing new historical Sam Wyndham crime series set in colonial-era Calcutta, India, where a newly arrived Scotland Yard detective is confronted with the murder of a British official.

1919. Scotland Yard detective Sam Wyndham survived the trenches of the Great War but lost his wife Sarah to influenza. He sinks into a depression that he medicates with opium. So, when the opportunity to head to Calcutta, India, presents itself, Wyndham has nothing to lose. He accepts a position on the police force—and immediately lands in the middle of a politically charged murder investigation.

Check out a review of the follow-up book, A Necessary Evil.

Alexander MacCauley, an aid to the Lieutenant Governor of Calcutta, is discovered mutilated in a gutter just outside a brothel. And, as if that situation were not scandalous enough, there is a note found in his mouth: “No more warnings. English blood will run in the streets. Quit India!” Now, Wyndham has to find the murderer before outright rebellions breaks out.

A Rising Man is Abir Mukherjee’s debut novel and a Harvill Secker/Daily Telegraph crime-writing competition winner. The first of a series, this opener focuses on Detective Sam Wyndham. The novel is filled with fascinating historical detail, intriguing crime, and a minefield of political pitfalls the characters must navigate. Mukherjee manages to balance all of these elements.

The key to this balance is Sam Wyndham. As a newcomer to Calcutta, Wyndham provides a window into this new place and time. Wyndham himself is a fairly traditional investigator—white, educated, escaping a tragic past, and yet focused on the crime in front of him—so in some ways he’s an archetype the reader will immediately recognize. But Mukherjee moves Wyndham beyond the “typical” by creating a sense of verisimilitude in the moment. Mukherjee, with a very good eye/imagination for historical—and sometimes anatomical—detail, makes Wyndham’s life experiences tangible to the reader:

The body lay twisted, face up and half submerged in an open sewer. Throat cut, limbs at unnatural angles, and a large brown bloodstain on a starched white dress shirt. Some fingers were missing from one mangled hand and an eye had been pecked out of its socket—this final indignity the work of the hulking black crows who even now kept angry vigil from the rooftops above. All in all, not a very dignified end for a burra sahib.

Finally, there was the note. A bloodstained scrap of paper, balled up and forced into his mouth like a cork in a bottle. That was an interesting touch, and a new one to me. When you think you’ve seen it all, it’s nice to find that a killer can still surprise you.

Mukherjee’s India feels very truthful too. The colonial world is well-drawn, with every side represented and conflicting with one another. The historical moment serves as a fascinating complication in Wyndham’s immediate investigation. Not everyone is happy to have the white men policing their country. And the British have no tolerance for civil unrest—disobedience of any kind, civil or otherwise, is unacceptable.

In fact, the only thing worse than a white man investigating Indians is an Indian working for the British and investigating Indians. Enter Surendranath “Surrender-not” Banerjee. He’s a new sergeant in the department. He’s worked hard to be here, and he’s surrounded by people who underestimate him or belittle him.

He isn’t allowed into several places because of his race—obviously a difficulty when you’re supposed to be investigating a crime. However, Banerjee isn’t one to be stopped. There are plenty of places he can’t go, but there are plenty of places where he’s the only one who doesn’t stick out like a sore, white thumb—places like nighttime in Black Town, where he has to think quick to hide his white fellow-officers:

The sight of two sahibs wandering through Bagbazar at this time of night would have generated as much unwanted interest as the car, possibly more. So we moved surreptitiously, taking advantage of the darkness. Or rather Digby and I did. Surrender-not, without the need to mask his appearance, walked comfortably in plain sight a few paces ahead of us, making sure the path was clear. I could have sworn the sergeant was taking some perverse pleasure in being able to walk freely in the street while we Englishmen were forced to skulk in the shadows.

The bicycles came closer, almost in line with Banerjee. Just before they drew level with him, the sergeant seemed to have an idea. He raised a foot and stamped it down heavily on the tail of one of the dogs. The animal let out a shriek of pain and bolted down the lane as if electrocuted, straight into the path of the oncoming cyclists. He hit one at full pelt, knocking the rider a clean ten feet across his handlebars. The other dogs, roused by their comrade’s howls, immediately rushed forward, surrounding the riders and barking furiously. While Banerjee went to the aid of the stricken fellows, Digby and I took advantage of the ensuing chaos to hurry past unnoticed.

Watching these characters navigate the rich world Abir Mukherjee has created in A Rising Man is a satisfying reading experience. Wyndham’s hunt for MacCauley’s murderer takes him through the labyrinth of a government recovering from world war, a tangle of greedy businessmen trying to turn a fast buck, and through interwoven groups of resistance fighters—all of which keep the pages turning. Both Sam Wyndham and Surrender-not Banerjee are two creatively developed characters who are more than capable of carrying readers through Calcutta for many books to come.