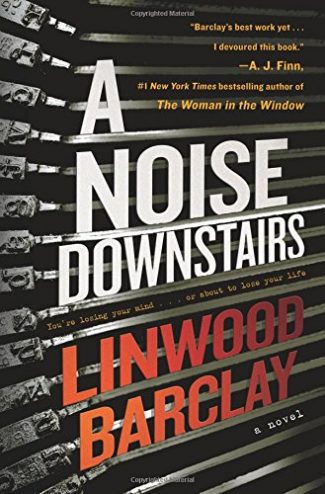 A Noise Downstairs by Linwood Barclay is a haunting psychological thriller in which a man is troubled by odd sounds for which there is no rational explanation.

Linwood Barclay is considered tops when it comes to small-town thrillers, and I can certainly understand why after reading A Noise Downstairs—a sly little chiller that takes place in the charming seaside town of Milford, CT. The setup is certainly creepy: West Haven college professor Paul Davis is driving home one night when he notices a car in front of him that he recognizes. It’s a big, blue Volvo that’s as recognizable as its owner, Paul’s colleague and mentor, Kenneth Hoffman. Kenneth seems to be driving erratically, weaving around and swerving over the middle line.

Worried for his friend, Paul follows the Volvo and witnesses Kenneth throwing something into a dumpster then setting off again. When Kenneth pulls to the side of the road, Paul stops too, planning to offer his help. He doesn’t count on finding the bodies of two women wrapped in plastic in the back of Kenneth’s car. And Kenneth didn’t count on being caught trying to bury them out in the middle of nowhere. Surprised, Kenneth smacks Paul upside the head with a shovel. He doesn’t kill him, though, and eight months later, Kenneth is in prison and Paul is coping with the aftereffects of, well, being hit really hard in the head with a shovel—including headaches, horrible nightmares, and losing time.

On a positive note, things seem to be getting back on track with his real estate agent wife, Charlotte. He’s seeing a psychologist, Dr. Anna White, but he feels like there’s something more he can do to help his recovery, so he asks her advice on an idea he has:

“Instead of trying to put all this behind me, I want to confront it. I want to know more. I want to know everything. About what happened to me. About Kenneth. I want to talk to the people whose lives he touched. And not just in a bad way. The good, too. I want to understand all the different Kenneths. If it’s possible, I’d like to actually talk to him, if they’ll let me into the prison to see him. And if he’ll see me, of course. I guess what I’m searching for is the answer to a bigger question.”

Anna tented her fingers. “Which is?”

“I could just say yes and save you the trouble.” She took in a long breath, then let it out slowly. “I could go either way on this. Do you honestly think it will help?”

Paul took a moment before answering.

“If I can look into the eyes of evil in the real world, maybe I won’t have to run from it in my sleep.”

Charlotte seems to be on board with the idea, sort of. She just wants Paul to get better. When she brings home an antique Underwood typewriter and sets it up in his tiny office, Paul is thrilled. Charlotte explains that while he may not be able to write on it—citing problems finding ribbons and such—it could prove to be an inspiration. What Charlotte couldn’t know is that it’s the same sort of typewriter that Kenneth forced the two women he killed to type out notes on before he slit their throats. It was never recovered, but certainly it’s a coincidence. Paul starts to wonder more about coincidence and other things when—soon after the typewriter arrives—he starts to hear strange sounds in the night.

It was just after two in the morning when he heard the sounds.

He became aware of them while he was still asleep, so when he first opened his eyes, and heard nothing, he thought he must have been dreaming.

But then he heard it again.

He immediately knew the sound. It was a new one to the household but instantly recognizable. One floor down, someone was playing with the antique typewriter in his cramped office.

Immediately, Paul suspects his nine-year-old son Josh—who is visiting from his mother’s—of playing with it, but when he gets down there, there’s no one at the typewriter. The only thing Paul can do is chalk it up to bad dreams. But when it keeps happening, he grows increasingly desperate, driving him to take more risks in talking to the people that Kenneth knew, including the husbands of the women he killed—women with which he’d been having an affair. Meanwhile, Dr. Anna White is dealing with her elderly father, who lives with her, and a patient named Gavin Hitchins, who has a penchant for killing small animals and seems to be harassing her other patients.

The typewriter drama gets so out of control that Paul actually begins to question whether something supernatural is involved, especially after notes began appearing in the typewriter—notes that he doesn’t remember typing. Everyone around him assumes he’s typing the notes and not remembering it, but Anna isn’t so sure. It’s not that she thinks there’s any ghostly activity going on, but she’s increasingly suspicious that something other than Paul’s head injury is in play.

Barclay imbues his propulsive narrative with a simmering, low menace, and readers won’t help but feel for poor Paul as he falls down the rabbit hole. Is he actually going crazy, or is something else going on? It would be hard to say much more without spoiling the denouement, but I will say that Barclay takes a risk in the last act that lesser authors may not have been able to pull off. This one is a lot of fun, and you’ll want to keep an eye out for the unlikely hero that rises to the occasion in the finale.