Review: A Murder by Any Name by Suzanne M. Wolfe 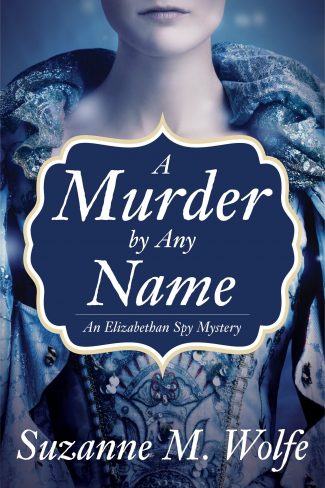 A Murder by Any Name

A Murder by Any Name by Suzanne M. Wolfe is the first book in the Elizabethan Spy historical mystery series, where a brutal murder threatens the sanctity of the Elizabethan court, and it’s up to a hot-tempered spy to save the day.

Nicholas Holt—dissolute youngest son of a noble family, owner of The Black Sheep tavern, and unwilling spy for Sir Robert Cecil—is summoned to Queen Elizabeth’s palace not long before Christmas.

The virginal Cecily Carew, the Queen’s newest lady-in-waiting, has been found murdered in the Queen’s own chapel, laid out as if a sacrificial offering. Within hours of the discovery, rumors are already spreading like poison through the court and surrounding city—rumors that a Jewish murderer is to blame and that the killing was meant to strike a religious blow at the monarch who rules Church and State equally.

Elizabeth orders Nick to uncover the truth before riots can begin—but Nick is already taking this case to heart. He knew Cecily as a girl and is outraged by her senseless, tragic death.

More than that, two of his closest friends are Jewish and Spanish, making them doubly endangered by the anti-Semitic, racist vitriol spilling into the streets. If he doesn’t catch the culprit soon, Eli and Rivkah will suffer the consequences.

Nick had been largely oblivious to the harsher laws of the land, but since taking up residence in Bankside and coming to know Kat, Eli, and Rivkah, not to mention the denizens of his district, those criminals he greeted by name in the taproom of The Black Sheep or in the street—Pip, Black Jack, Henry, Joe, Will, Kit—he had come to put a human face on a whole class of undesirables. Kat had taught him what it meant to be despised as a profession; Eli and Rivkah what it meant to be persecuted as a race.

No longer insulated by the privileges of birth, he was more aware of the misery around him, more prone to anger at the great gulf between the haves and the much more numerous have-nots. Nick was convinced that poverty was the chief reason most turned to crime. For those who committed the worst crimes of all—murder, treason, sedition, rape—he had no mercy and considered no punishment too cruel. Determined to seek out the man who had murdered Cecily, he would be there to witness his terrible end.

A Murder by Any Name is equal parts mystery and historical dive into the seedy, dangerous, and dirty streets of Elizabethan London. Suzanne M. Wolfe clearly knows the time period inside and out, and she spares none of the fragrant details when painting her scenes and characters.

Middle-aged Elizabeth is a fiercely intelligent woman and a clever and capable ruler, but she also curses like a sailor and has teeth rotted black by rich food. Chamber pots are emptied directly into the streets. Brutal displays like bear-baiting draw cheering crowds. Life is exceedingly cheap, even in the affluent Cheapside, and Nick encounters suffering, want, and injustice at every turn.

Luckily, our hero is a modern man—particularly for his time. Nick cares deeply for the victims and relates readily to people most noblemen would instantly despise: prostitutes, beggars, foreign refugees. He admires the capable women around him and refuses to condemn them for behavior that would be condoned in a man. He shrinks away from torture and barbarous punishments, preferring to uncover the truth through his wits and observations.

Beyond the likable protagonist, the story is populated with compelling characters. The Jewish twins—brother Eli and sister Rivkah—narrowly escaped flames in Spain and are both equally capable doctors. The Queen’s diminutive Fool, Codpiece, is much more than he seems. The criminal element that visits Nick’s tavern—from the mobster Black Jack to the playwright/actors Will Shakespeare and Kit Marlowe—are as colorful as you’d expect.

Partnered by a massive Irish wolfhound named Hector and his right-hand man, John, Nick’s investigation twists and turns just enough to keep the waters clouded and the audience guessing right up to the climax.

The pace is steady, and Wolfe’s detours to further flesh out the city and its citizens are just as enjoyable as the uncovered clues and big reveals; this is a period piece that rewards close reading and will thoroughly delight history buffs. Not once did I feel the urge to skim.

A Murder by Any Name is a deeply satisfying whodunit, rich in detail and compelling from start to finish. My one complaint: it was far too short. Hopefully, Wolfe is already working on a follow-up. I look forward to following Nick through further political and criminal intrigue.