Review: A Measure of Darkness by Jonathan and Jesse Kellerman 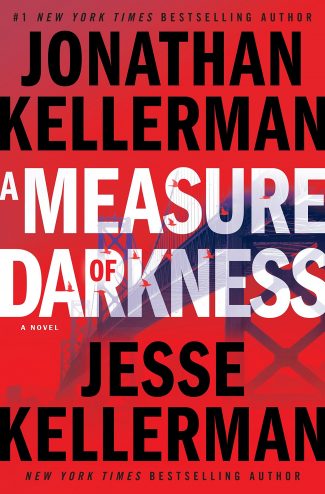 A Measure of Darkness

A Measure of Darkness by Jonathan and Jesse Kellerman is the second book in the Clay Edison series, where the deputy coroner goes to extreme lengths for a forgotten Jane Doe.

Fresh off of a suspension, Deputy Coroner Clay Edison is back on duty just in time to catch one of the bloodiest shootings in Oakland history. The call comes in at 2:00 a.m. Clay is pulled from sleep and told to head to the home of Rhiannon Cooke at 11th and Almond. A loud house party mixed with some irritated neighbors has led to a devastating scene. At least three dead from gunshot wounds. Another, the victim of a hit and run. Clay catches the case.

When he reaches the scene, it’s chaos. The shooting happened during a huge party at one of Oakland’s historical homes. Partygoers, police, and bystanders scramble around the bloody scene, making it almost impossible to sort through. It takes all night to get a final body count—and the count is high.

Not only are there the victims of the initial shooting situation—including a sleeping six-year-old caught by a stray bullet—but an additional girl was run over by panicked guests trying to escape the gunplay. Clay and his team process the scene over a grueling night.

I stepped inside the pop-up, closed the panel behind, and knelt by the body.

Blood patched the sheet, less than one would expect given the violence of the trauma. In a perfect world, the first responders would not have covered the decedent; in a perfect world, there are no rubberneckers, and we arrive to find everything and everyone positioned precisely as they were at the instant of death.

Tonight the world was at its least perfect.

I folded the sheet back.

She was young. Twenty or a couple years past. Lying on her stomach, head wrenched to the left. The exposed half of her face was heavily made up, white pigments and silver glitter; the skin was unharmed and remarkably clean save a few flecks of road dirt and axle grease.

The side of her face ground into the asphalt—I was glad I couldn’t see it.

She wore robes, flowing and white, now shredded. Strapped to her back was a mangled pair of angel’s wings, white faux fur and feathers hot glued to a hinged mechanical frame, a pull-chain dangling at the right hip. I guessed that the entire apparatus had gotten snarled in the vehicle’s undercarriage, dragging her along.

Her feet were bare.

I took pictures, wondering where the second flip-flop was.

The case of the angel Jane Doe is a complicated one. She is initially identified by a friend as Jasmine Gomez—an identification quickly revised upon the discovery that Jasmine was born with male genitalia and once called Kevin Gomez. Since Jasmine’s family is not supportive of her transition, Clay is caught in the awkward position of trying to find someone to claim her body and her possessions, which legally go to her blood relatives and not the friends who have been supporting her.

Just when the long night is winding down, Clay is called to the other side of the party property, where a rookie has found something odd in a shed:

The shed stood on a poured-concrete pad, six feet wide and four feet deep. Hand tools hung on pegs affixed to the insides of the doors. It was a dumb place to try and hide a body. Heaped sacks of potting soil and organic fertilizer left open only an eighteen-inch strip of concrete, parallel to the threshold, in which to place the decedent.

Size and proportions suggested a female. She lay oriented with the head to the right, twisted at the waist, a position that elevated the left hip and shoulder and forced the right arm behind her. It was the tip of the right thumb that Grelling had spotted. More sacks covered the legs, neck, head, and parts of the torso. One dirty blue running shoe stuck out.

Manure masked any other smells.

She hadn’t been there long.

Unlike all the other victims, this Jane Doe doesn’t appear to be related to the shootout. She has been beaten, strangled, and hidden. It’s not Clay’s job to investigate her actual death, but finding out who she is will definitely help investigators narrow their search for a killer.

A Measure of Darkness reads like a million mysteries in one. There are the shooters who need to be hunted down, the hit-and-run perpetrator, and the Jane Doe in the shed. The further he digs, however, the weirder the answers get—leading him farther and farther from the heart of Oakland to strange places with different moral centers, different ideals, and different practices than the city where he lives. Somewhere both innocent and dark.

This is the second Clay Edison collaboration by father-son writing team Jonathan and Jesse Kellerman. The complex story moves quick and delves into intriguing questions of identity. No character here is as simple as a fingerprint identification or a birth certificate. Lives are messy, convoluted things—and A Measure of Darkness explores that mess while telling a very human story.