Review: A Mask of Shadows by Oscar de Muriel 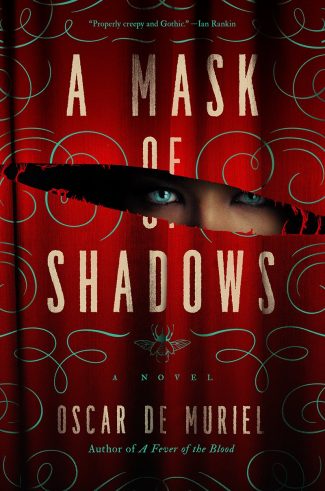 A Mask of Shadows

In A Mask of Shadows by Oscar de Muriel, the third book in the Frey & McGray Mystery series, Edinburgh’s most unlikely detective duo―“Nine-Nails” McGray and Inspector Ian Frey―must try to solve a murder mystery on the Scottish stage, as a new production of Macbeth is attracting the machinations of a serial killer.

Is there a banshee haunting a production of Macbeth? It’s up to Adolphus “Nine Nails” McGray and his partner, Inspector Ian Frey—both of the awesomely titled Commission for the Elucidation of Unsolved Cases Presumably Related to the Odd and Ghostly—to find out. The banshee makes its first appearance in 1889 while the production is still in London.

It was a horrible wail, rising quickly until it became a drilling, unbearable blast that injured the ears and curdled the blood.

Irving released the canvas, covered his ears and closed his eyes in agony. He noticed the sudden silence from the crowd, and pictured the shocked faces of the audience, aghast at the infernal cry.

The terrified screams of the cast were like whispers compared with that otherworldly shriek, which held itself on and on, as if drawing air from the most powerful lungs.

When the (real-life and very famous) stage actor Henry Irving continues to investigate the infernal noise, he gets quite a shock.

His heart nearly stopped as the dim lights silhouetted a crouching woman.

‘Mrs. Harwood!’ he exclaimed, not believing his eyes. The usually gentle seamstress was on her knees, her hands stretched forwards and her nails scratching the floorboards. She looked up, so suddenly that Irving thought her neck had snapped.

‘You heard her too!’ she babbled, trembling from head to toes. There were dark stains all over her skirt.

Irving drew a hand to his face, but before he covered his mouth he saw that his fingers were tainted too, the same colour as Mrs. Harwood’s.

‘Tell me you heard her!’ she implored, just as someone came through the canvases, bringing a heavy oil lamp.

On the floor, surrounded by scratches on the wooden boards, there was a smear of blood—red letters as crooked as the words they spelled:

All hail! The Scottish stage shall see your death

That’s bad enough, but the production’s lead actress—the hugely famous Shakespearean actress Ellen Terry (star struck yet?)—finds a bucket of animal brains in her dressing room. I don’t know about you, but that wouldn’t make me want to set out for Scotland anytime soon. But set out for Scotland they do, and bad luck follows, along with possibly something else…

When Frey is summoned to the scene of, well, something, he arrives to find blood stains on the street and a wild-haired man that claims to have heard a banshee.

His outburst made us all start. The little girl burst into tears and her mother wrapped her more tightly in her arms.

‘A petite woman, all covered in white rags—I could not see her face. She was crouching in the middle of the road, washing a nasty bundle of bloody clothes in the street puddles.’

Frey isn’t at all convinced that they’re dealing with something supernatural, but he’s hoping he can interest McGray. In fact, Frey is desperate to pull McGray out of the pall he’s been in since a horrible affair that involved his beloved sister Pansy. Frey finds McGray, predictably, at a pub, and McGray perks right up at the word “banshee” and the phrase “spotted under Regent Bridge.”

Luckily, they’ve got all the power of the Commission for the Elucidation of Unsolved Cases Presumably Related to the Odd and Ghostly behind them—which isn’t much and is almost fully funded by McGray. No matter. If anyone can get to the bottom of the screeching phantom, it’s these two.

Frey is convinced that it’s a publicity stunt to get bodies in seats at the Macbeth production, but McGray wants to believe. Supernatural or not, whoever is leaving the phantom messages portends more death, and it’s up to our heroes to keep that from happening—even if they have to navigate the salacious personal lives of Henry Irving and Ellen Terry as well as the melodramatic goings-on behind the scenes of the stage production.

Oh, and did I mention that Bram Stoker is the stage manager? Frey mostly narrates, but much of the narrative comes from Stoker’s journal entries.

I love reading about the ins and outs of stage production, and paired with the often funny interplay between the British Frey and the very Scottish McGray, it’s a delight. The author brings very real people to sparkling life, and their very human foibles are front and center. Oodles of atmosphere and a crackling mystery with suitably gruesome touches (slavering, bloody-mouthed dogs, anyone?) makes this one a winner. Three books in, and this series just keeps getting better and better.

X-Files comparisons are inevitable—McGray and Frey are a Mulder and Scully for the 1800s. But this is an impeccably written and startlingly unique series that shouldn’t be missed.