Review: A Handful of Ashes by Rob McCarthy 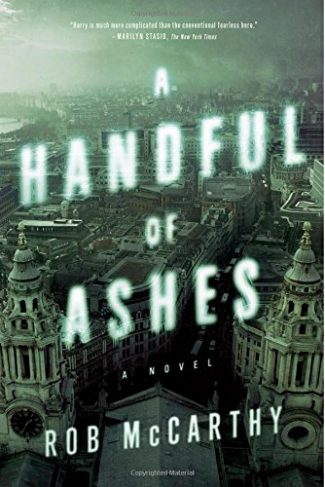 A Handful of Ashes

A Handful of Ashes by Rob McCarthy is the second Dr. Harry Kent medical thriller, where a whistleblowing doctor seemingly commits suicide—but when it turns out to be murder, Harry must dig even deeper to uncover the truth.

When Dr. Harry Kent, a junior doctor and Force Medical Examiner for the Metropolitan Police, gets a call to certify the death of a woman that supposedly cut her wrists, he’s puzzled when he finds out that a DCI on the Homicide Assessment Team will be on scene. They usually aren’t present unless murder is pretty much a sure thing. When he arrives at the scene, Harry is shocked by the level of carnage, but he strives to stay calm as he does his job. He can’t help but take in details about the scene in the process.

The doors were still open and warm air swept through the apartment, heavy with the humidity of the approaching storm.

Had that been the last thing Susan Bayliss had ever felt? Harry wondered. Warm early-morning summer air blowing in through the window? Her life had ended in a wicker chair turned to face out of the balcony doors. Harry followed her dead eyes out and took in the view again. It was probably better at night than in the daytime, and she hadn’t enjoyed the sunrise. The proof of that was the thick lake of blood that the chair stood in, a rich black scarlet against the varnished wooden flooring.

Harry takes his job seriously, and it’s almost eerie—even a little sacred—when he prepares to makes his final declaration.

He found this moment unsettling. He always had. It had been a bread-and-butter duty when he’d been a junior doctor, being called to one of the geriatric wards at two in the morning to confirm the death of an inpatient. For two minutes, he would sit there, pressed up against a stranger, usually someone who he had never encountered in life, the thoughts going through his head often existential in nature. The earpieces of his stethoscope acted like plugs and blocked out all the ambient noise, so there was only the transmitted sounds of his own breathing. The heart and lungs of this woman were silent.

It’s this passage that gives you a taste of how Harry approaches his job and even sets a certain tone for the rest of the book. As Harry continues his examination of Bayliss’s body, he begins to notice a few strange markings indicating that she was held down, and if that’s the case, her death was certainly not a suicide.

This presents a nightmare for the detectives at the scene, including a certain DCI Frankie Noble, with whom Harry was in a nine-month relationship. It ended badly, and Harry’s in no mood to deal with her. But he is a professional, so he takes it in stride—or at least he tries to. So the case is murder, and Susan’s identity immediately turns this into a high-profile case: Susan Bayliss was a heart surgeon at Belgrave Hospital for Sick Children. Belgrave was under investigation for the deaths of several children after undergoing surgery for congenital heart problems. Bayliss was thought to have leaked an internal report that led to the investigation and was castigated as a whistleblower. She even lost her job. Suicide would seem to make sense to many people after she lost so much, but it’s not to be, and the potential for the case to be explosive and even career making for Noble is high.

After a heartbreaking examination of Bayliss’s broken-hearted, live-in girlfriend of 10 years, Teodora Guzman, to rule her out as a suspect, he’s approached by Noble. If this is murder, and they’re pretty sure it is, Noble will need Harry’s help. After all, Harry knows the medical world, and Noble would just like him to be available for any questions she might have. Harry’s not thrilled and manages to walk away, much to Noble’s chagrin. But it doesn’t take long before she barges in his apartment, telling him that her ass is on the line and all she wants is him to look at the medical reports of the kids who died. Feeling like he’ll certainly regret it, Harry says yes. The accounts are absolutely soul crushing. Did Bayliss actually commit suicide, or is a murderer at work—and if so, why? After all, the cat’s already out of the bag.

Harry and Frankie have their flaws. They’re both addicts: Frankie is an alcoholic, and Harry has a bit of a speed problem, which he disguises by putting the pills in aspirin bottles. He’s never been caught and doesn’t plan to be, although the addiction is really affecting his life and causing a lack of sleep—around 20 hours a week. It also doesn’t help that they’re being bombarded on all sides by grieving parents and hospital politics. However, Harry and Frankie—both a bit abrasive and frequently cranky—do make a good duo, even if they don’t make good romantic partners.

Rob McCarthy is a fantastic author who has a knack for writing meaty characters. Harry’s spiral and the fact that very young children are involved in this case give the story a lot of emotional heft. It doesn’t hurt that McCarthy is a medical student, so the medical details ring true. While it would certainly be better to read The Hollow Men first, new readers can jump in here with no problem—although you’ll certainly want to know a little more about Harry and Frankie’s fraught relationship. There are lots of plot threads floating around here, but McCarthy weaves them all together with ease while building unbearable suspense all the way to the very emotional finale.