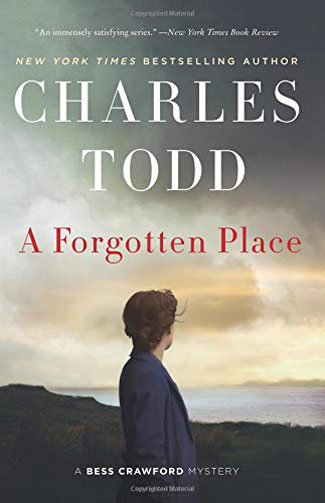 A Forgotten Place by Charles Todd is the 10th book in the Bess Crawford series, where Bess Crawford finds herself caught in deadly circumstances on a remote Welsh headland after the end of the Great War.

The Great War has officially ended for Bess Crawford, nursing Sister and frequent sleuth. But her work isn’t finished. Stationed at a clinic for amputees, she tends to the physical wounds of traumatized soldiers—but knows it’s not enough.

So many of these men have lost their livelihoods as well as their limbs; so many know they won’t truly be welcomed home now that they’re a burden; so many wish they had died quickly on a battlefield. It’s all Bess can do to keep them from finishing the job started by the Germans.

A group of Welsh soldiers is deemed out of the woods and sent home together, but she can’t stop worrying about them. So when an opportunity to take a few days off from the clinic arrives, she journeys to a small, poverty-stricken mining valley in search of her former patients.

Bad news plagues her trip, and before long, she finds herself on the remote and harsh Welsh coast. The last of the men, Captain Williams, has moved in with his widowed sister-in-law to help her with her small sheep farm, and Bess is desperate for some good news before she returns to London.

The Captain is doing much better—Bess credits his sister-in-law Rachel’s kindness and a necessary sense of purpose on the farm. But he isn’t all that happy to see her, and she soon understands why.

This forgotten place known as Caudle is home to insular, secretive people. People who go out of their way to drive away outsiders. There’s no constabulary, no telephone or telegraph, no regular mail service or motorcars. Difficult to reach, it’s nearly impossible to leave.

And, as Bess discovers when she abruptly finds herself marooned, it’s a place where a killer is at work.

Nasty rumors. Vicious attacks. Bodies washed up on the waves. Suspicious behavior and a constant watch by unfriendly eyes.

If Bess isn’t careful, she may never return to her clinic.

As with the previous nine Bess Crawford mysteries, the stark realities of war are painted in a bright and unforgiving light. There is precious little honor or glory to be found in the aftermath of conflict, and the pages practically vibrate with tension, anger, and melancholy.

As Christmas approached, a good many of the patients in the wards had lost even the incentive to recover. Too often they feared being a burden on their families, to be pitied by wives and sweethearts, to be told that the position they’d held before the war, whether as a tenant farmer or a bank manager, had already been taken by someone else. Someone whole. There were no shaving mirrors for those with burns or damaged jaws, but they already knew how terrifyingly hideous they were—they only had to look at the man in the next bed. And the amputees told us over and over again that they would rather be dead than live without a limb.

No conquering heroes, these men. No victory parades for them. Our patients were the ultimate reality of war. And a suicide watch was maintained twenty-four hours of the day.

This was the detritus that war left behind, those who would have no place in the nation they had fought to protect.

…The war was over. The dying wasn’t.

Bess remains an empathetic and worthy heroine, a feeling and courageous narrator with a strong moral compass and boundless reserves of determination. We weep alongside her as she loses patients and cheer when she succeeds with others.

And we certainly fear for her in Caudle, a windswept and storm-lashed peninsula that would be at home in any Gothic horror. Save for the tragic Captain Williams and the kind Rachel, there is no one Bess can trust, and she faces numerous dangers among the resentful townsfolk.

The mother-and-son writing team of Charles Todd does an excellent job (as always) of setting the scene and stoking the tension, slowly unspooling strange behavior and shocking acts of violence until you find yourself frantically speeding through the pages in search of answers and a break in the unease.

The climax does feel rushed given the steady pace of the rest of the novel, with several revelations delivered rapid-fire, but that minor transgression can be forgiven—as a whole, A Forgotten Place is a highly atmospheric chiller, perfect for the approaching fall nights.

Established fans of the Crawford series will delight in this installment, and anyone in search of a solidly researched, authentic historical whodunit will find plenty to satisfy here. For a perfect double-header, I recommend pairing A Forgotten Place with Daphne du Maurier’s Jamaica Inn, another vibrant portrait of misdeeds and deadly suspicion on a rocky British coast.