Review: A Dark and Twisting Path by Julia Buckley 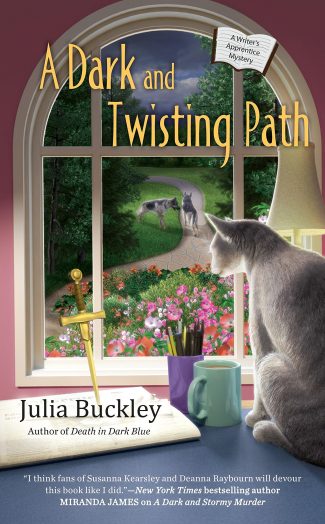 A Dark and Twisting Path

A Dark and Twisting Path by Julia Buckley is the third book in the Writer’s Apprentice Mystery series, where Lena London is happily working on a new collaboration with her idol and bestselling suspense novelist and friend Camilla Graham, but her joy is short-lived when a dark cloud descends upon the quaint town of Blue Lake, Indiana.

“Just because you’re paranoid doesn’t mean they aren’t after you.” Words to live (or die) by for neophyte author Lena London in A Dark and Twisting Path. If Lena is paranoid, she has a good reason. She’s living her best life in Blue Lake, Indiana, “happily working on a new collaboration with her idol and bestselling suspense novelist and friend Camilla Graham.” But dead bodies keep turning up. Murders that are related either to Camilla or Sam West, Lena’s boyfriend. Sam was accused of murdering his former wife, Victoria, in Death in Dark Blue (the second in Buckley’s series). If Victoria hadn’t shown up alive, Sam would still be a suspect. Victoria leans heavily on Sam for moral support. Allison, Lena’s best friend, has had enough.

My friend Allison put down her slice of pizza and turned to me. “Lena, I know she’s been through a great deal, but she’s so melodramatic. And Sam isn’t her husband. He’s your man.

This is why Allison is my best friend. I would never have dared to say that Victoria West hadn’t gone through terrible things, nor would I have ventured to criticize her frequent press conferences. Of course she wanted her child back, as did we all. I worried about the baby that Nikon Lazos had stolen in broad daylight, and like everyone I was shocked that the police and the government agencies had been unable to locate the child.

That’s a lot to unpack. An omnipresent former wife is bad enough, but what takes its toll on Lena is the feeling of always being under observation. Deciphering whether interested onlookers are friend or foe (like when tabloid journalists masquerade as tourists) wears her down. No rest for the weary, unfortunately. Lena’s friend Allison discovers the body of her mail carrier in her backyard, plunging Lena back into the cycle of inexplicable murders. Allison’s husband had quarreled with the dead postman—would the police blame him? Nope, because a knife belonging to Sam West is stuck in the body. History is repeating itself.

Beyond the clever and intricate plot, what makes A Dark and Twisting Path remarkable is the town and townspeople of Blue Lake, Indiana, who are interesting without being overly cozy or contrived. Buckley places you firmly in her setting with vivid descriptions of “the eccentric wonderland that was Bick’s Hardware” and “the second-run theater, where one could get popcorn and a drink for three dollars!” It’s no wonder readers would like to visit Blue Lake; unfortunately, it only exists in Buckley’s imagination, as she told mystery author Terry Ambrose.

“Though Blue Lake is an imaginary place, readers recognize it because it has many of the qualities of small towns they’ve seen before. I love going there, too, which is why I enjoy writing this series. More and more the town is taking shape in my mind; I would love to work with a mapmaker to lay it all out.”

I also really enjoyed Lena’s professional collaboration with Camilla Graham. Lena is at the beginning of her writing career, but the two women work together seamlessly to create well-crafted bestsellers. The insider quality of their conversations can be quite humorous, like when Sam finds out that Lena shares “a birthday with Daphne du Maurier—one of Camilla’s heroes.”

Camilla clapped. “Oh, Lena, that is perfect!! You have Gothic fiction in your blood.”

“I take it this Daphne woman is a writer?” Sam asked.

I stared at him. “She wrote Rebecca? The House on the Strand? Jamaica Inn?”

Sam and Allison exchanged a wry glance, and Sam said, “Clearly I am a philistine.”

Buckley also weaves in Camilla and Lena’s “fictional” story, Death at Delphi—excerpts of which preface each chapter—which adds depth to the plot. It would be Camilla’s second book with a Greek setting.

“Yes! But it was set on Corfu, and I was thinking more about Delphi. The place of the oracle, with such antiquity and solemnity. It would be a great backdrop for a mystery.”

Advice or a response from an oracle is “typically one that is ambiguous or obscure.” An excellent analogy for Lena’s efforts to unravel the threatening events that engulf her and her loved ones. It’s no coincidence that Nikon Lazos, the father of Victoria’s daughter Athena, is Greek. It often seems like the heroine of Death at Delphi is on a parallel path with Lena, like when Lena embraces going all out for a festive evening.

They went to the museum gala in Athens, convinced they would find their nemesis and the answers to their questions. As they moved among the glittering gowns and costly champagne, they felt a growing sense of menace.

—From Death at Delphi

Bucolic Blue Lake is far from being a den of crime, but it is a place that holds onto its secrets with grim intensity. In the words of a psychic from Death at Delphi, “The past is a dormant volcano.” It’s up to Lena and her colleagues to exhume the body of evidence before they’re buried under another murderous eruption.