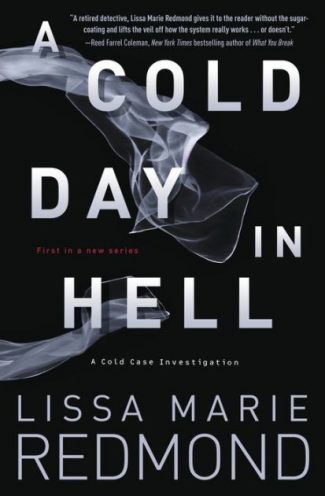 A Cold Day In Hell

A Cold Day in Hell by Lissa Marie Redmond is a debut novel and the first book in the Cold Case Investigation series.

Buffalo Detective Lauren Riley marches to her own drummer. She’s divorced (twice), a devoted mom to her two almost-grown daughters, a loyal partner, and her case-closed ratio is darn impressive. As busy as she is closing cold cases, she finds time to hire out as a private investigator—for the right price.

Riley spends her days surrounded by the detritus of decades. Linda, the office secretary, calls up to say there’s a man who wants to see her—he won’t give his name because if Riley heard it, she wouldn’t meet with him. That gets her curiosity up.

She walked past the old Homicide files that lined the room, some in boxes pushed against the wall, others in crumbling manila folders written out in fading ink. Stuffed into three rooms on the second floor of Buffalo police headquarters was thirty years’ worth of unsolved murders in disintegrating files. Ridiculous, she thought as she maneuvered through the clutter, these should all be digitized.

It’s “slick defense attorney Frank Violanti.” He was right when he said Lauren wouldn’t take a meeting. They have clashed many times in the courtroom.

She let the door fall shut. “You called me a sloppy cop and said you wouldn’t trust me to make you breakfast, let alone handle a homicide.”

He was backing away from her now, hands up. “Courtroom banter; it’s not personal.”

She thrust a finger out and poked him in the chest. “You said I tried to seduce your client to get him to confess.”

“That was his perspective on the meeting. . .”

“You got a lot of balls to come here, to my office, and ask for five minutes of my time, Mr. Violanti.”

“Just hear me out, Lauren.”

“That’s Detective Riley. And I don’t have time for you.”

As it happens, Lauren does have time for Defense Lawyer Violanti. He’s desperate to hire her because his client is accused of murder in what appears to be an open-and-shut case. And it’s personal: the client is his 18-year-old godson, David. Violanti begs her to “just talk to David.” He says that if she isn’t convinced of David’s innocence, she should take it up with the detective assigned to the case, Joe Wheeler.

Violanti’s swagger seemed to fail him a little. “He made the arrest this morning.”

She mulled that over in her head for a second. “Joe Wheeler is an even bigger scumbag than you are. And you can get me disbarred for saying things like that to me.”

“That’s how strongly I believe in him. I’m willing to risk it. He’s just a kid, Lauren.”

Lauren goes to the County Holding center to meet David and gauge him and his story for herself. David Spencer is a good-looking kid. The murder victim is a married woman who had consensual sex with David in the parking lot of the toy store where he works. It’s a particularly twisted case. David admits that he and Katherine fooled around for about an hour in her car—according to the blushing, nervous teen, Vine “was really into it.” How did Mrs. Katherine Vine end up murdered? Lauren realizes David is the age of her youngest daughter Erin’s guy friends. She tells David, “Kid, you’re in a whole lot of trouble,” but she agrees to come on board as Violanti’s private investigator.

A Cold Day in Hell is Lissa Marie Redmond’s first novel, and it’s the first of the Cold Case Investigation series. Redmond knows of what she writes; she’s a recently retired homicide detective of the Buffalo Police Department.

The City of Buffalo was your typical rustbelt dinosaur. After the grain elevators shut down and the steel plants closed, people started flocking south to escape the harsh winters. While the nation’s economy plummeted, the downturn was barely a blip in a city whose fortunes were won and lost fifty years ago.

Buffalo is resilient. The ‘70s were tough on its inhabitants, but its unique Great Lakes setting gives it an enduring beauty. The characters in A Cold Day in Hell reflect the tensions of a community that is experiencing somewhat of a renaissance. Not everyone succeeds in a new economy; there are haves and have-nots. The rebirth reveals the gulf between old and new, be it new money or old attitudes. The swirling ambitions of District Attorney Carl Church, the festering resentments of detective Joe Wheeler—just two of a compelling cast of characters—permeate A Cold Day in Hell. Bring on the second Cold Case because there are more secrets to uncover in Lauren Riley’s disintegrating files.