Book Review: A Brush with Shadows by Anna Lee Huber 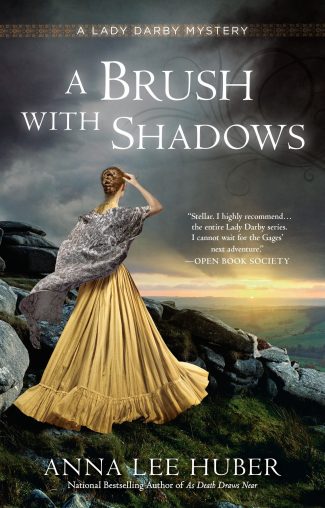 A Brush with Shadows

A Brush with Shadows by Anna Lee Huber is the sixth Lady Darby Mystery, where Sebastian Gage returns home to battle the ghosts of his past and prevent them from destroying his future with Kiera.

The Scottish proverb “The devil’s boots don’t creak” is a spot-on entrée into A Brush with Shadows and, indeed, most mysteries. Why? Because its underlying meaning is that “bad things can creep up on you if you’re not wary.”

Sebastian Gage, Lady Kiera Darby’s husband, has avoided his childhood home, Langstone Manor, for all his adulthood. Lady Darby, his wife of just a few months, knows his childhood memories are miserable, but when his grandfather urgently begs him to visit, she encourages Gage to go.

It’s July 1831, William IV is on the throne, and the newlyweds are a source of gossip, particularly Lady Darby. Needs must, however, and Viscount Tavistock needs Gage’s help. Gage is “a gentleman inquiry agent of some renown.” His new wife has a facility in solving crimes as well.

The scandal over my involvement with the work of my first husband, the great anatomist Sir Anthony Darby—specifically my sketching his dissections for an anatomical textbook he was writing—had blackened my name and made me a figure of fear and revulsion in many circles. Few cared to note that my participation had been forced, or that in spite of it, my drawings had been beautiful and flawless. For them it was proof enough of my unnaturalness that as a gentlewoman I had not only survived such a gruesome ordeal, but had also gone on to use that reluctantly accrued knowledge to help solve murders and other crimes.

Sebastian and Kiera are shocked to find that Viscount Tavistock is desperately ill. He’s also very worried because his heir, Gage’s cousin Alfred, has been missing for more than a week. Can Gage discreetly find him?

He wandered out into the moors and never returned. The Viscount is convinced someone or something other than the natural hazards of the moors is to blame for Alfred’s disappearance.

Like many mysteries set in Dartmoor, the moor plays a powerful part. There is whispered suggestion it played a role in Albert’s disappearance as well as deaths lost in family lore. Is it a deus ex machina luring people to their death? Gage tries to explain.

“Much of Dartmoor is extremely isolated. It’s all too easy to become lost and disoriented. Especially if the weather shifts, which it is notorious for doing. It can be bright and sunny one instant, and then suddenly the sky clouds over and pours rain or snow, or a fog rolls in so thick you can’t see your hands in front of your face.”

Gage’s aristocratic relatives are not very welcoming. His aunt, the Dowager Baroness Langstone, is chilly to the point of rudeness.

“Not that I’m not happy to see you,” she said to Gage after nodding to me, her inflection stating that’s exactly what she meant. “But what are you doing here?”

She and Alfred’s younger brother Rory are astonished to hear that Grandfather sent for Gage. Lady Langstone doesn’t have much confidence in Gage’s detective abilities, but she’s desperately worried about her son. He’s been sick for months, according to Rory, “laid low by some stomach complaint worse than normal crapulence.” If Alfred got lost on the moors in his weakened state, who knows if he could survive?

A Brush with Shadows has some gothic touches: windows that fly open in the middle of the night, hidden passages that are still in use, a shoelace that is deliberately cut on Kiera’s sturdy walking shoes, and a sense that someone is hovering over the visiting couple while they sleep. This isn’t Lady Darby’s first rodeo fox hunt, however, and she realizes that the culprit wants her “feeling a bit out of sorts.”

Part of me questioned whether I was making connections and assigning culpability where there was none. But another part of me—the part that perked up when I sensed something was not as it seemed—told me I was right to be suspicious.

It is well that Lady Darby does not ignore her “intuition, or the consequences could be dire.” Although A Brush with Shadows—the sixth in the Lady Darby series—can be read as a standalone, one is tempted to circle back to the first of the series, The Anatomist’s Wife, and dive in.