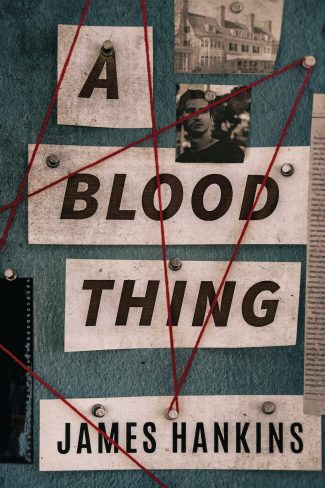 A Blood Thing by James Hankins is a suspenseful thriller that puts a family on the edge of ruin and explores how far siblings will go to protect each other.

Back in the 1950s, television families were almost always depicted as close and loving. Oh, there might be the occasional sibling squabble, but one or both parents would take the kids aside and get them to work everything out. One big happy family again. Then, that flipped. Siblings didn’t just squabble. They schemed, fought, and tried to destroy each other—if not physically, then professionally, romantically, or financially.

A Blood Thing is about four siblings who would do anything for each other. The eldest brother is the governor of Vermont. The second brother works for the Vermont State Patrol. The only sister, Molly, served in the army. Tyler, Molly’s twin, is the sweetest 29-year-old man you could meet.

But this is no saccharine 1950s ideal family. For one thing, Tyler has a traumatic brain injury, which he suffered at a young age. He now has the mental capacity of an 11-year-old.

“I should probably go home now,” he said.

“Now?” the smaller cop said. He seemed short for a policeman, Tyler thought. He was definitely shorter than the cops on TV. “Are you sure? Because if you insist on leaving, we’ll take you right home, like we promised. But you said you wanted to help us out, and I don’t think you’ve helped us as much as you can.”

It was true. When they’d come to his house a while ago and asked for his help on a case, he thought it would be cool to assist the police on a real investigation. He’d been excited. The car they’d driven him in was a regular car, though, not a black and white with lights on top, which was disappointing, but they’d bought him McDonald’s food on the way to the station, which was good. But the food was gone now, and the questions just kept coming. And they were getting harder to answer without talking about things that Tyler didn’t want to talk about.

A methodical “fixer” is framing Tyler for the murder of a woman. He is blackmailing Governor Andrew Kane. The fixer says he has proof, which will exonerate Andy’s baby brother. The governor, who built his reputation on integrity, only has to do one little thing for the anonymous voice on the other end of the phone.

He was moving down the line, nearing the end of the small crowd, making his way toward his black GMC SUV, when he grasped a man’s hand thrust toward him and immediately felt something between their palms. The man withdrew his hand quickly, and Andrew was left holding an object. A small black cell phone.

Faint alarm bells clanged in his head, but he quickly relaxed. Plenty of people wanted to use their phones to have their photos taken with the governor. Usually, they held it themselves while taking a selfie beside Andrew. Or they give their phones or camera to their friends or family members. Now and then they even tried to hand them to Andrew’s security detail, which never went as they hoped. So, although this man had gone about it in an odd fashion, most likely he simply wanted a picture he could post on his social media site of choice.

Andrew looked more closely at the phone. It was a flip phone. Small, no bigger than his palm. It didn’t even seem capable of taking photos. It looked like a throwaway … a burner phone. But what did Andrew know about it? Technology was changing every second. Perhaps this thing was capable of recording in HD and 3D while simultaneously monitoring his blood pressure, issuing stock market advice, and changing the channels on his TV.

He was still looking at the phone when the man leaned closer and said very quietly, too quietly for anyone but Andrew to hear, “Keep that phone with you at all times, Governor. And keep it secret. You’re going to need it after the arrest.”

James Hankins doles out family secrets and the fixer’s motivations and methods at exactly the right pace. Just as I thought I could set the book down, another twist grabbed me and kept me reading on. I love it when a book makes me think about it long after I reach the end, and A Blood Thing certainly does that.

How did the fixer get to be the way he is? What if he’d used his skills for good?

Hankins also made me think about my own siblings—three of them, all older. How well do I really know them? What secrets might they be carrying around? Do they ever wonder about me?

That would be silly. I’m an open book.