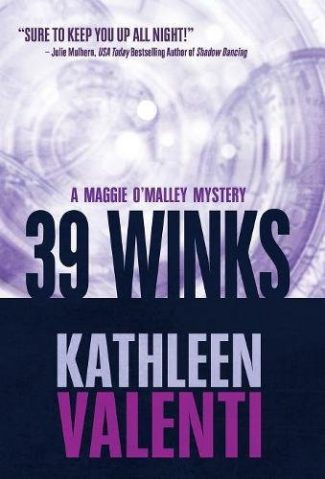 39 Winks by Kathleen Valenti is the second book in the Maggie O’Malley Mystery series—a gripping page-turner with more twists than a surgeon’s suture as well as a tale of lies, betrayals, and greed that will keep you up at night looking over your shoulder.

39 Winks finds amateur sleuth Maggie O’Malley catapulted into another murder mystery—this time involving someone near and dear to her heart. Maggie is relieved of her duties at a popular lingerie store at the same time she finds out that her boyfriend Constantine’s uncle has been murdered. Uncle Howard happened to be found by his wife, Polly, who is a frequent sleepwalker, which muddies the whole affair. But it goes so much deeper when Maggie and Constantine run to help Polly and end up unraveling a sordid tale with many twists and turns along the way.

Polly is suffering from Parkinson’s and has been sleepwalking regularly for quite some time. Given that she found Howard face down in his cereal bowl with his throat slit during one of her sleepwalks leaves her suspicious.

On autopilot, directing her body as she moved through the house with no awareness of the rooms she’d explored, the things she’d touched, the phrases she’d mixed into incoherent yet elaborate word salads.

She had no recollection of her nocturnal wanderings other than slivers of memory that sometimes came to her when Howard told her what she had done the night before. Of course, now there was no Howard.

Fast-forward to another sleepwalking incident that sees Polly leave the house, drive a car to where she and Howard lived, and dig up the murder weapon, and Aunt Polly’s not looking too good. Small and frail Polly becomes the number-one suspect and is soon arrested.

Maggie scooted from beneath his arms and grabbed a yellow gingham dishcloth from beside the faucet. She ran it under warm water then dragged it over the counters like a mini-Zamboni that dispensed an icy glow. “Once the cops start following other leads, they’ll realize their suspicions of Polly are insane. People sleepwalk. That doesn’t make them murderers.”

Constantine tilted his hand in a maybe-yes-maybe-no. “Not typically, but murderous sleepwalking isn’t completely unheard of. Don’t you remember that guy who killed his wife while they were camping? He claimed he was dreaming about fighting some guys and woke up with a strangled wife.”

“Well, you’ve got to admit the sleepwalking thing does sound a little incredible.”

Maggie placed the washcloth beside the sink and gave him a long look. “You’re not suggesting that Aunt Polly is making it up.”

“God no.” Constantine looked appalled at the suggestion. “I’m just saying I see where the cops are coming from. The spouse is always the first suspect. Or the person who finds the body. Or the person with blood all over him—or in this case, her. Aunt Polly has all three, not to mention a sleepwalking problem. Have you seen that movie Sleepwalk with Me? People do crazy shit in their sleep. Eliminating her as a suspect—or not—is their first order of business. At least that’s how they do it on Law & Order.”

Maggie doesn’t want to be figuring out another murder, but she loves Polly and hates to see her like this, so she saddles up for the ride. And what a ride it is! With a growing list of suspects, Polly and Constantine navigate the terrible scene of shady cosmetic practices all the way to human trafficking.

There’s a lot of humor in this tale, which keeps it lighthearted in the midst of some serious business. I really enjoy the relationship between Maggie and Constantine, mostly due to their constant quoting from movies and television shows. There are enough pop-culture references to give a chuckle but not too many to where it gets annoying. I’m a quoter in my daily life too, so this made the characters and their relationship even more believable to me.

“I didn’t get much sleep, either.” He put on his best Chevy Chase voice. “The bed was very soft, Rusty,” he quoted from Vacation.

Movie quotes were part of their secret language, a shared dialect in which entire conversations could be had without uttering an original word. It was the rock upon which their friendship had been built, along with an unyielding love of Dr. Pepper, Mad Magazine, and movies, both classic and campy. It felt good to be on familiar ground, to have some constancy despite the new status of their relationship and the turmoil surrounding Howard’s murder, but she was too tired to engage in conversation, quote-based or not.

I haven’t read the first book in the series, but I didn’t find this one difficult to follow. I do think it would’ve helped, in some ways, but I never got lost completely. It was also a fairly quick read—I finished it in two evenings—which, for me, is a sign of a good read that keeps my attention and speeds things along. I will be interested to see what other situations Maggie gets into in the future and where this series goes. Pick this one up for an engaging whodunit that will surprise you in the end, all while staying infused with a hearty dose of humor.