Susanna Calkins, author of The Fate of the Flapper, details the story of Chicago’s first policewoman which exemplifies how women, especially women of color, can be easily written out of history.

On November 17, 1920, two Chicago-based actresses, Marie Ramey and Lillian Thompson, were killed and thrown from a car after they had allegedly “indulged in an automobile flirtation with four young men.”  While two of the men turned themselves into the police shortly afterward, they couldn’t (or wouldn’t) identify their companions. The investigation stalled until policewoman Anna Louches broke the case. As the Chicago Daily Tribune explained, “Through private sources she learned the names of two young men from the North Side who had been members of the automobile party.” After reporting to her commander, she was on hand to help arrest the other men involved in the double homicide.

This bit of sleuthing offers just one of many examples of how the first policewomen to serve in the Chicago Police Department distinguished themselves in their first few decades on the force.  As scholar Dorothy M. Schultz notes, unlike police matrons, who generally watched over and transferred female prisoners, policewomen had a very different role in Chicago, and in other cities around the country.

Chicago led the nation in introducing women officially into the police force. The very first policewoman in the United States was Marie Owens, who was hired in 1893 by the Chicago Police Department, assigned to the Detective’s Bureau working cases mostly related to the welfare of women and children. Though she enjoyed her work, it’s clear it was not easy being the only woman on the force. When she was interviewed by the Chicago Daily Tribune in 1906, more than half the article was devoted to her eye color, appearance, and “womanly disposition.” Though the other officers spoke highly of her, she was kept out of lounges and rest areas with no place of her own at the station. She remained the lone policewoman in Chicago for another fifteen years, and one of only a handful in the nation.

In 1909, Alice Clement joined the Chicago police department, serving in the Detective Bureau for the next 16 years, until she passed away from a terminal illness at the age of 45. Her time on the police force began with her patrolling ladies’ departments of department stores, but the Chicago Daily Tribune mentions a number of “flirt cases” in which she had arrested “mashers” (men who acted lewdly towards women) in parks and movie theaters, often apparently having offered herself as bait. On one occasion she lured a would-be predator straight into a Chicago police station, where he was promptly arrested by the other detectives waiting there. A larger-than-life figure, Clement tracked down suspects, even traveling outside Chicago to bring criminals back to the city. In 1922, she even showed up in a New York City court to bring back a young silk stealer, dressed in “a purple turban, a black cape, suede pumps, large pearl earrings and several rings and bracelets.” At just over five feet tall, the prisoner loomed over her. When asked if she’d be able to manage the prisoner, Clement replied, “I’m a first-grade detective of the Chicago police department and I pack a gun. Just rest about me.” At the time of her death in 1926, The Tribune noted that Clement had gained “wide recognition for her work in capturing confidence men, pickpockets and mashers.”

Several years after Clement was hired, in 1913, Chicago’s Mayor Harrison hired ten other policewomen (out of over 300 applicants, most of whom did not pass the physical and mental exams, with over 70 dropping out when they heard the expectations for the job). By 1915, this number had grown to twenty-one and Chicago was one of twenty-five cities that had hired policewomen. By the end of the first World War, policewomen were no longer a “curious experiment,” viewed as necessary for preserving morality and order in an increasingly disordered city. Their numbers remained small, however, as throughout the 1920s, Chicago had employed about thirty policewomen (out of a force of 600).

Read a review of The Fate of the Flapper by Susanna Calkins, set in 1920s’ Chicago!

The earliest policewomen patrolled streets, entertainment venues, and parks, and like Alice Clement, conducted simple sting operations, tracked down suspects, arrested criminals, and testified in court. Trained in jiu-jitsu and shooting, policewomen were expected to be modest, possess common sense and high ideals, demonstrate empathy to women and children, be “husky” and brave, and single (either unmarried or widowed). Their status was only visible by the star on their chests; unlike their male colleagues, they did not wear uniforms, although there was much discussion (and consternation) around the idea of policewomen potentially wearing trousers instead of skirts.

Many of the first policewomen came from the middle class, full of reforming zeal, and were often—surprisingly—college-educated at a time when very few women attended institutions of higher learning.  Initially armed with hat pins or sticks, later they carried guns and were regularly noted for their marksmanship. As the Chicago Daily Tribune noted in 1927, “Chicago’s policewomen, who are gaining a reputation for quick and accurate marksmanship again proved their mettle.”

During this time, the Chicago police department is also distinguished for hiring Grace Wilson (Grear), the first African American policewoman in the United States. Wilson was appointed on March 28, 1918, and served on the force for 25 years, often working without a partner on Chicago’s south side. According to the Chicago Defender, she was well-respected, receiving attention for “bagging” a “notorious crook” on January 24, 1920, as well as for several awards for her marksmanship during her time on the force.

The story of Chicago’s first policewomen exemplifies how women, especially women of color, can be easily written out of history. Assumptions about their existence and relative importance may be made because of their lack of visibility, their inability to transcend glass ceilings, and patriarchal expectations about “women’s work.” Were Chicago policewomen allowed to take on high profile cases in the first few decades? Not so much. Did policewomen still get promotions and commendations for the vital work they did? Absolutely. These Chicago policewomen worked hard, they cared about protecting the citizens of the city, and they persisted even when undervalued by others.  In September 1917 a grand jury was convened to review the policewomen’s work after a public outcry had been raised about their activities and purpose. The Chief of Chicago police ardently defended them, stating “I consider that these policewomen are doing first-class work…The record of what they have done shows in black and white. It is a first-class record.” 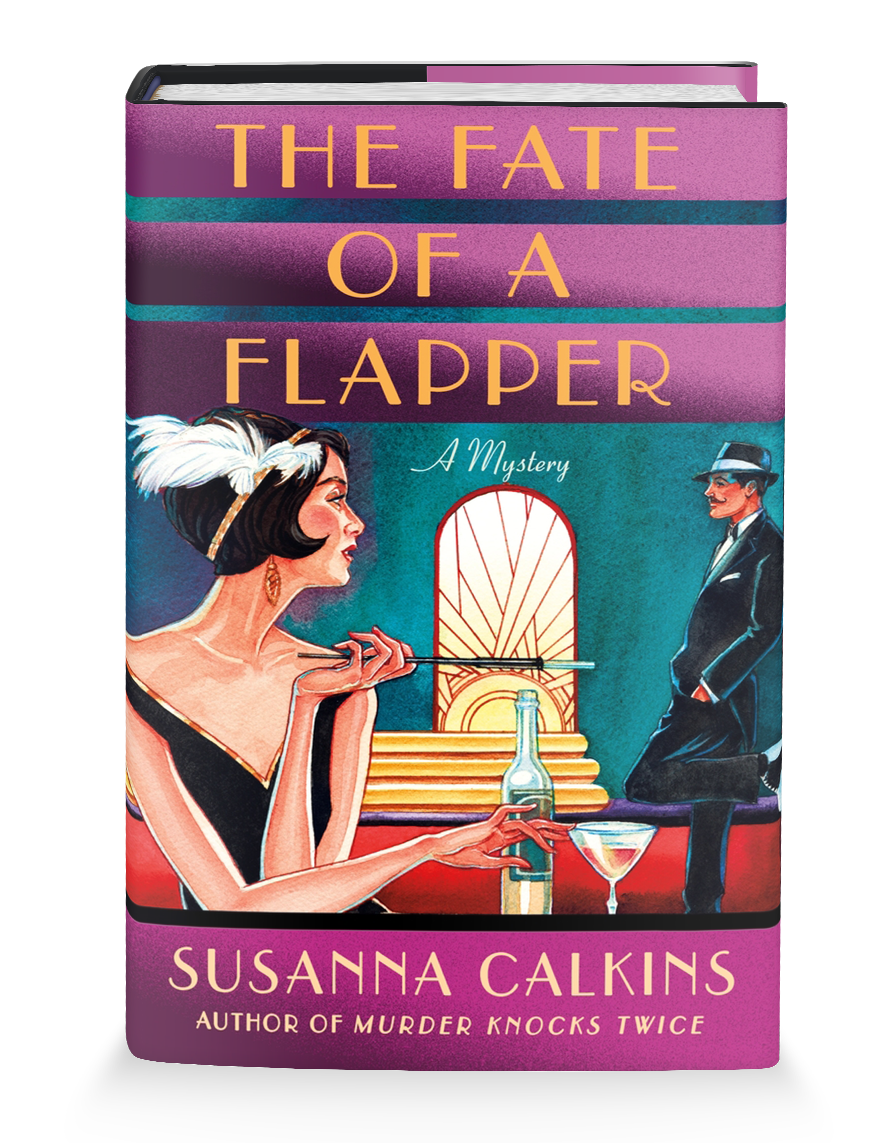 About The Fate of the Flapper:

The Fate of a Flapper, the second mystery in this captivating new series, takes readers into the dark, dangerous, and glittering underworld of a 1920’s Chicago speakeasy.

After nine months as a cigarette girl at the Third Door, one of Chicago’s premier moonshine parlors, Gina Ricci feels like she’s finally getting into the swing of things. The year is 1929, the Chicago Cubs are almost in the World Series, neighborhood gangs are all-powerful, and though Prohibition is the law of the land, the Third Door can’t serve the cocktails fast enough.

Two women in particular are throwing drinks back with abandon while chatting up a couple of bankers, and Gina can’t help but notice the levels of inebriation and the tension at their table. When the group stumbles out in the early morning, she tries to put them out of her head. But once at home that night, Gina’s sleep is interrupted when her cousin Nancy, a police officer, calls—she’s found a body. Gina hurries over to photograph the crime scene, but stops short when she recognizes the body: it’s one of the women from the night before.

Could the Third Door have served the woman bad liquor? Or, Gina wonders, could this be murder? As the gangs and bombings draw ever closer, all of Chicago starts to feel like a warzone, and Gina is determined to find out if this death was an unlucky accident, or a casualty of combat.