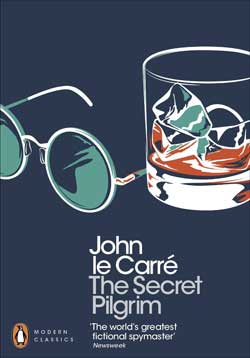 Ned—a surname-less protagonist who first appeared in The Russia House (1989)—runs the Sarratt agent training school for The Circus (a thinly disguised MI6) and invites the retired George Smiley to speak as guest of honor at the commencement. Initially Ned is doubtful the laconic Smiley will accept his offer but the old spy seems quite amenable to offer pearls of wisdom to the prospective graduates.

In The Secret Pilgrim (1990), we finally see Smiley getting some well-deserved respect as a revered elder statesman who is imparting his cloak and dagger expertise to an adoring and insatiable audience. Through the book, John Le Carré uses Smiley’s lecture as a framework to Ned’s own reminisces—where Smiley strolls to and fro like an omnipresent Gandalf the Grey—building up the honor of an otherwise overlooked hero.

Pilgrim opens with Smiley addressing the class, lamenting aspects of The Circus’s past, as Ned looks on:

“If I regret anything at all, it's the way we wasted our time and skills. All the false alleys, and bogus friends, the misapplication of our energies. All the delusions we had about who we were.” He replaced his spectacles and, as I fancied, turned his smile upon myself. And suddenly I felt like one of my own students. It was the sixties again. I was a fledgling spy, and George Smiley—tolerant, patient, clever George—was observing my first attempts at flight.

Le Carré then rewinds the clock’s hands and we glimpse the callow Ned … a newbie operative who almost torpedoes his career before it has hardly started when he mistakes a bodyguard of a diplomat he’s trailing for a terrorist and nearly kills the bloke. His pride was wounded on that particular misadventure but his innocence is soon lost forever when his best friend, and fellow spy, Ben’s entire Berlin network is compromised, and Ben goes into hiding. Enter Smiley who begins tugging the threads, questioning Ned, planting seeds, and generally setting him up as a Judas Goat for The Circus. Ned thinks he’s outsmarted the master spy—covered his trail—only to come up short.

… [A]nd then Smiley appeared in the other doorway, wearing the apologetic air that frequently accompanied his most ruthless acts. And I recognised with no particular surprise that I had done everything he had wanted me to do. I had put myself in Ben’s position and led them to my friend.

Regardless George Smiley and The Circus see promising qualities in Ned, keeping him employed, where he toils at various assignments, slowly rising to the top. As The Secret Pilgrim continues to interlace Smiley’s speech with Ned’s memoirs we encounter many other players from past Le Carré novels, including dashing Toby Esterhase, traitorous Bill Haydon, and loyal Peter Guillam. This fan was downright entertained by the final bows of these characters and seeing a few of their stories being told from different angles.

Enjoyment aside, the author’s solemn, main message is how the West spent far too much time propping up sullied regimes, following the almighty oil dollars, and, in the end, losing their souls to twisted ideals. It’s difficult to overstate this eight-book series importance in demystifying the public’s love affair with the romantic, glamourous notion of espionage. And Le Carré is just as tough on Capitalism as he is on the vanquished Communism. “Sometimes I think the most vulgar thing about the Cold War,” Smiley lectures, “was the way we learned to gobble up our own propaganda.”