October 26, 2020
In Boise Longpig Hunting Club, bounty hunter Jake Halligan and his gun-runner sister Frankie, along with Jake’s wife Janine, found themselves hunted by a sinister cabal of ultra-rich extremists. In the sequel, Rattlesnake Rodeo, they’re on the run, doing their best to survive—but that doesn’t stop Frankie from telling a very disturbing story about a little trip to Mexico.

On the three-hour drive to Boise, we said little, our attention locked on the radio crackling news reports every twenty minutes. No word of famous people disappearing, or shootouts in the woods. During the hunt, we had set part of an abandoned town on fire, and I supposed that smoke from the inferno would eventually alert some hikers and rangers. Even then, it might take days for the broader world to realize the true extent of the chaos.

Every few miles, I glanced in the side mirror. Benedict followed us in the SUV, Surfer Boy beside him, Little Bubba still passed out in the back seat. They were wired for combat (well, except Bubba), but I doubted anyone would hit us on the road. As my father told me once, you’re safe when you’re traveling fast. It’s when you stop that you need to worry.

“Baby, I found our devices. You had a red case on your iPhone, right?” Janine held up a melted bit of red plastic, a blackened sliver of aluminum and circuit-board embedded in its center. “Some of these scraps could be my phone, too.”

I hissed through clenched teeth. “That sucks.”

“This is for the truck, right?” She tossed me a key, slightly bent, its fob reduced to a gray lump.

“Probably still works. Also found your wallet, so that’s a big win.” She handed over a scorched lump of leather and plastic.

Opening it, I found that my driver’s license had survived, along with one of my credit cards, but the rest was unrecognizable. “Yeah, look at all this winning,” I said, stuffing the mess in my pocket.

“Back to snooping.” Fetching a somewhat-intact phone from the bin, she held down the power button until the bubbled screen lit up, filling the back seat with a white glow.

“I’m just glad we’re in one piece, baby.” My voice was a little shakier than I liked.

“Yeah, but I could use a massage.” She tapped in a code, then another. “Guess what? This guy’s password is zero-zero-zero-zero. I didn’t even realize phones let you use that anymore.”

“Hold on.” Janine flicked through the contacts. “Jeff Hart? Who’s that?”

“He’s an heir to something,” Frankie said. “Like, box stores or something. Look him up.”

“Honestly, I’d rather call my daughter.” Janine shook the phone. “But it’d be a bad idea to do that from this one, right? They’d sure trace that.”

“Should have asked one of your men for their phone.” Tossing the device into the bin, Janine flopped back in her seat, wiping her hands on her pants, tapping her knees. Based on the speed of the taps, I could tell that thinking about our daughter had spiked her stress levels.

“Not a great idea, either,” Frankie said. “In the meantime, if you could turn off any phones that are still on, that’d be great. We’re closer to constant coverage, so someone could start tracking. I’m still not sure what I want to do with all those things.”

“The phones and wallets?” I said. “We totally need to get rid of them.”

“Maybe. It’s also a treasure trove, if it’s used right. My people could spend days mining the data on them.”

“Sure, if a SWAT team doesn’t kick in your door, first.”

“I’d like to see them get past my redneck security system.” Frankie returned her attention to the road.

It was hard to tell if she was joking.

We stayed quiet for another forty miles, through another news update that focused on football scores and the president’s latest lunacy, followed by nothing but faint static as we dipped through another long valley. A sign for a hot spring snapped past, followed by a gas station with old-style pumps beneath a blue awning—the first sign of civilization in at least an hour, and a familiar one. Years ago, on any road trip that took us down Highway 55, Frankie and I would stop there for beers and ice cream.

Frankie’s distant gaze hinted at her own trip down memory lane. She said, more to Janine than me: “When I first started out, I was running guns to guys in Juárez. Small-time crews, not the cartels, which didn’t need some chick to sell them secondhand nines and forty-fives. It wasn’t fantastic money, given the risk, but I was twenty-two and trying to make a name for myself.”

“You were buying from those guys in Oregon, right?” I asked. “And driving them south, over the border?”

“That’s right. Remember my old Volvo with the compartment under the floorboards? Aw, I miss that car so much. Anyway, one day I arrive in Juárez, ready to do some business, but my guys are nowhere to be found, and nobody’s saying anything. I’m pissed because I just drove these rifles through a couple of checkpoints. So I make some calls, and I’m sitting in a little restaurant with awesome burritos, waiting for any kind of response. And a man walks in.”

This wasn’t a story I knew.

“He was a well-dressed guy,” Frankie continued, “in a white suit and a white hat. Middle-aged, kind of fat, with this gray moustache. I thought about making a joke about the Mexican Colonel Sanders, but I stopped when I got a good look at his eyes, which were as dead as a stuffed animal’s. He took a seat at my table, and I could tell he was unarmed. I had my hand in my jacket pocket, on the little pistol I kept there, but I knew if I used it, I would never leave Juárez alive. The man was from the cartel.”

“To this day, I don’t know. He kept saying ‘my employer’ in this whispery little voice. His employer didn’t have a problem with me, he said, but there was a problem with the guys I sold guns to. He told me that they’d been liquidated, those guys, but that I was free to come and go in Juárez, provided I never sold a weapon there again.”

“That’s not everything. As he was getting up to leave, I did a stupid thing. I asked him, ‘What’s the secret of success?’ Like I was still a college student, and he was a professor, and I was looking for life advice. I swear, it slipped out. Shows how young I was.”

“To his credit, he didn’t have me killed on the spot for being an idiot. Instead, he smiled and said: ‘Theatricality will get you everywhere.’ It pissed me off at first, because I didn’t understand what he meant, but before I could ask him anything else, he left the restaurant. I finished my burrito, got back in the Volvo, and headed for the border. Traffic was slow. At first, I thought it was because of an accident. Then I saw the real reason why.” Frankie swallowed. “There was a crime scene. By shitty coincidence, it was my guys, the ones I sold guns to. The cartel had decapitated them and set the heads on this low stone wall by the road, then hung the bodies from an overpass right across. That was what the man meant by theatricality. Freak everyone out, and they’re too scared to come at you.”

A few months ago, Frankie might have told that story at one of our backyard barbeques, and Janine might have retaliated by refusing to invite her over for a month or two. The old Janine disliked tales of murder and gore. Heck, she usually refused to watch action movies, which meant I put on a classic John Woo flick and blasted it loud whenever I was feeling passive-aggressive and wanted her out of the house. Now the same woman leaned between the seats, locked on Frankie’s words.

“And for a long time, I thought that was the right strategy,” Frankie said. “You blow up an enemy with a rocket launcher, it sends a message that you’ll always escalate, no matter what the situation. You let your main guy wear a rubber monkey mask, it tells folks you’re a little bit crazy. But I’ve been having second thoughts. Even before this crap we just went through, I had the FBI on my ass. Maybe a big show isn’t always a great idea.”

“We’re going to have to lie low for a long time after all this, anyway,” I said.

That startled me: my sister was an adrenaline junkie, and as much as I feared for her safety, I could never see her quitting her life as an arms dealer. What was she going to do instead, paint fields like Van Gogh?

“Not that I can retire,” Frankie continued. “Too much overhead, too many people depending on me. I’d need a big score.”

“Have you ever thought about going legit?” Janine asked. “Like, open a gun store or something?”

For the first time in many miles, we slowed, approaching the turnoff that led through a rocky notch into the Treasure Valley. Down below, Boise awaited us. I thumbed the dashboard vent, angling it away from me, but the coldness I felt had nothing to do with the temperature in the car. Frankie seemed so confident, and yet I sensed an evil rushing down like the night out of the east, a deep blackness that would drown us. 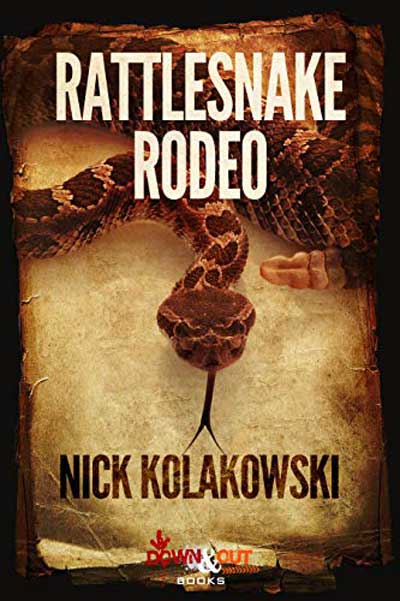 About Rattlesnake Rodeo by Nick Kolakowski

Three nights ago, Jake Halligan and his ultra-lethal sister Frankie were kidnapped by a sadistic billionaire with a vendetta against their family. That billionaire offered them a terrible deal: Spend the next 24 hours in the backwoods of Idaho, hunted by rich men with the latest in lethal weaponry. If Jake and Frankie survived, they’d go free; otherwise, nobody would ever find their bodies.

Jake and Frankie managed to escape that terrible game, but their problems are just beginning. They’re broke, on the run, and hunted by every cop between Oregon and Montana. If they’re going to make it through, they may need to strike a devil’s bargain—and carry out a seemingly impossible crime.

Rattlesnake Rodeo is a neo-Western noir filled with incredible twists. If you want true justice against the greedy and powerful, sometimes you have no choice but to rely on the worst people…