October 27, 2020
Rattlesnake Rodeo by Nick Kolakowski is the second book in Nick's Boise Longpig Hunting Club series from Down & Out Books. Read on for how a hike Nick took in eastern Oregon provided inspiration for his latest book.

It’s easy to panic when you realize that a five-foot rattlesnake is swimming a few feet away from you.

My wife and I had agreed to let a good friend of ours take us on a hike through the wilds of eastern Oregon. The hike itself, we’d been assured as we loaded up the SUV with water, provisions, and a very friendly dog, was an easy one—no more than a mile along a well-defined trail, with a famous hot spring to plunge into at the very end.

In order to reach the hiking trail, we took Highway 95 to the flyspeck town of Jordan Valley, near the Idaho-Oregon border. From there, we turned onto a dirt road for another thirty miles of bumpy driving, until we arrived at the Owyhee Canyon rim, where rocky switchbacks led to the valley floor far below. This was the height of summer, and we could feel the day’s rising heat pushing against the SUV’s windows.

If this sounds like the setup for one of those rural crime thrillers where people end up running for their lives through the wilderness, rest assured that I had that exact thought. My previous book, Boise Longpig Hunting Club, featured bounty hunter Jake Halligan and his arms-dealer sister Frankie doing their best to evade a sinister group of hunters (all millionaires and billionaires) in a thinly fictionalized version of Idaho’s Silver Valley.

The book had done well enough to encourage me to write a sequel, which I’d originally planned to set in New Orleans, with a plot that involved omnipresent digital surveillance, a contract killer who wore a steel mask modeled after a popular cartoon character, and a climactic hurricane. My half-completed first draft felt leaden, though, and soon I realized that I’d made a crucial mistake: “Longpig” ends on such an explosive beat, with so many secondary plot threads unresolved, that any sequel would need to begin pretty much immediately on its heels.

I just had no idea how to carry that out. I needed inspiration.

Parking the SUV, we loaded up and waded across the broad tributary that separated us from the trailhead. Except it wasn’t really a trailhead at all: What we found was brush and thickly tangled undergrowth. In order to move forward, we needed to stomp through waist-high grass sprouting from deep mud. Within seconds, our shoes were heavy with muck. The dog was nonplussed.

I started thinking about snakes.

If you’ve ever hiked out west—or back east, for that matter—your ears are always attuned for that familiar and terrifying rattle. Few other sounds on this planet will make you jump so far, so fast; it auto-triggers extreme reactions in the most primal core of your brain.

By the time the bushes and weeds gave way to sand and rock, and the trail rose from the river’s edge to the elevated base of the red-rock cliffs, I realized this hike was taking far longer than a mile. Our friend shrugged; she’d been here a few years before, and thought it’d been a mile or so to the springs. Maybe.

Before I could respond with a witty rejoinder, we all heard that familiar death-rattle. We froze. The trail had narrowed by that point. To our right, it crumbled away into a steep cliff to the river below. To our left, a mass of boulders, rusted barbed-wire, and dry grass hid what sounded like a massive rattler. We had sticks, and boots, and the rational part of my brain tried to reassure me that the snake—which we quickly spied on a nearby rock—meant us no harm, provided we didn’t come too close.

We edged carefully past the rock, well out of the snake’s striking range. We kept hiking, but my paranoia meter was now cranked to 11: every root and shaded rock seemed like it might contain venomous fangs. The heat, only mildly oppressive when we first exited the car, began to rise to what felt like thermonuclear levels.

After a bit more scrambling along the rocks, we crossed the river to the hot springs, which filled a series of rocky basins atop a waterfall. The view was spectacular.

After a bit more scrambling along the rocks, we crossed the river to the hot springs, which filled a series of rocky basins atop a waterfall. The view was spectacular. The hot, mineral-rich water on our skin felt marvelous. Best of all, there wasn’t anyone else around; it’s always a bit discouraging to spend the day picking your way along cliffs only to find a party exploding in what you feel, after hours of exhaustion, is your all-natural hot tub, damnit.

Lying in the water, I began thinking about what would have made that hike worse. Doing it at night, when snakes are active and you can’t see anything in front of you, seemed like the definition of nightmares. And what if someone was chasing you? If you were on the path that ran along the cliffs, you could only hope to outrun them—and not tumble into the abyss in the process. You could try wading down the river, but the muck and shallower patches would quickly turn that into a bad idea if you were trying to move quickly.

How would Frankie and Jake react if they were forced to do something like that?

I sat up in the water. I didn’t quite have my idea for the sequel, but I had the kernel of what could become the idea, if I tended to it carefully. From my steaming perch, I regarded the cliffs we’d just crossed with a more critical eye, trying to capture details that would make for good suspense fodder later. For example: all that rusted barbed wire around where we’d met the snake, the obvious remains of an old property line. What if one of my anti-heroes ran into that?

Read an Excerpt of Rattlesnake Rodeo by Nick Kolakowski

I think it was Thomas Harris who said that, once you spent some time as a crime journalist, you never looked at kitchens as benign places ever again. It’s a similar thing with crime-fiction writers: You’re often reduced to figuring out how the environment around you can turn deadly.

With the sun at its apex, we climbed from the hot springs, dressed, and descended the cliff beside the waterfall to the riverbank. For the first time since running into the snake on the cliffs, I was feeling relaxed. As we waded into the rushing waters, I told myself that we knew the route back; we had sticks in case we encountered our little reptile friend again, which gave us more than enough advantage, and besides—

The biggest rattlesnake I’d ever seen in my life slid smoothly, silently from the grass we’d just left. It swam beside us, vectoring for the same stretch of opposite shore, its body bulleting across the water’s surface with the greatest of ease.

We all screamed. Our primal brains slammed into overdrive. We sprinted as fast as we could across the river, angling to widen the distance between us and the speeding rattler. When we reached the riverbank, the animal had long since disappeared into the weeds—right where we needed to hike if we wanted to make it back to the SUV.

The hike back was everything you’d expect—a paranoid, heavy-stomping march. Only the dog seemed cheerful. If we ever do this hike again, I thought to myself, I’m bringing a flamethrower.

But at least I had my idea. Within a few months, I had the first draft of Rattlesnake Rodeo, which features a (slightly fictionalized) version of a certain canyon. At least when you’re the writer, you have control over what the reptiles do. 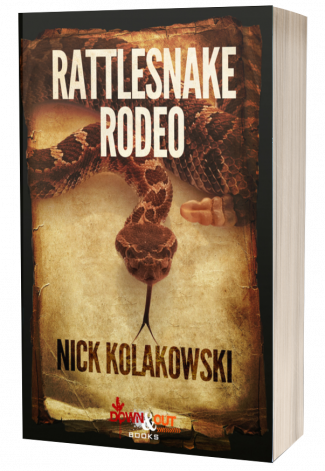 About Rattlesnake Rodeo by Nick Kolakowski:

Three nights ago, Jake Halligan and his ultra-lethal sister Frankie were kidnapped by a sadistic billionaire with a vendetta against their family. That billionaire offered them a terrible deal: Spend the next 24 hours in the backwoods of Idaho, hunted by rich men with the latest in lethal weaponry. If Jake and Frankie survived, they’d go free; otherwise, nobody would ever find their bodies.

Jake and Frankie managed to escape that terrible game, but their problems are just beginning. They’re broke, on the run, and hunted by every cop between Oregon and Montana. If they’re going to make it through, they may need to strike a devil’s bargain—and carry out a seemingly impossible crime.

Rattlesnake Rodeo is a neo-Western noir filled with incredible twists. If you want true justice against the greedy and powerful, sometimes you have no choice but to rely on the worst people…