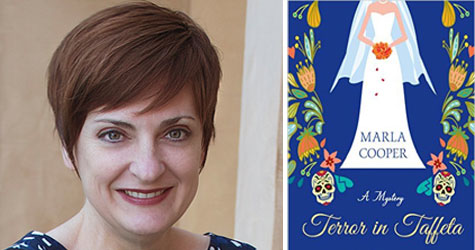 We had some fun asking Marla Cooper, author of Terror in Taffeta, questions about planning fictional literary weddings, her character Kelsey McKenna, and how to get blood uh, cranberry juice—Cran-Apple—out of a wedding dress.

What's the best way to get blood out of a wedding dress? (We're asking for a friend.)

I hate to have to tell you this, but that stain isn't going anywhere. Your “friend” is clearly going to have to burn the dress before it's taken into evidence, then buy a replacement dress and tell everyone she indulged in one too many menu tastings. Then, she should eat a bunch of cupcakes just to make sure her alibi holds. But, seriously…burn the evidence—er, I mean, dress.

What mystery/crime authors have inspired your writing?

I remember reading Dim Sum Dead by Jerrilyn Farmer and thinking, “That's it! That's the kind of thing I want to write.” Amateur sleuth, mostly cozy, but not the small town/village setting with quirky old ladies who drink tea and knit. (Not that there's anything wrong with that.) Same with Laura Levine's series, which involves a ghostwriter living in Los Angeles who I'm sure would be BFFs with Kelsey if they ever met.

What would your murder weapon of choice be?

I'm normally a hands-on kind of gal, but not when it comes to committing murder. I would choose poison, but I'd probably put it in a really yummy treat, like chocolate cake, because I'm not a monster. (Also, that pretty much guarantees that I'll get all the chocolate cake to myself from now on.)

Tell us about Kelsey McKenna. Where did you draw her from? Was she based off anyone in particular?

Yes! Several years ago, I got a job ghostwriting a guide with a destination wedding planner, and we met several times so she could give me an in-depth crash course in destination weddings. While she was telling me about her job, I remember sitting across from her thinking, “Going off to foreign countries with people you don't really know? Everyone expecting you to fix things when they go wrong? This is the perfect setup for a murder mystery!”

How would you plan Sherlock Holmes and Irene Adler's wedding?

I'm not sure I'd take him on as a client! Can you imagine how demanding he'd be? Nothing would get past him. On the other hand, he'd probably be preoccupied with the murder that had taken place earlier in the day, so maybe his scrutiny would be reserved for more important matters. Still, I think he'd be what is known in the biz as a Difficult Client.

What about Nick & Nora Charles?

Oooooh, that's a wedding I'd love to attend! Right off the bat, I'm thinking martini bar. There should also be a champagne fountain, possibly incorporating a Busby Berkeley-style musical number—although Nick would probably end up soused and manage to fall into the fountain. So, we'd have to make sure the ceremony was early enough in the day that he could actually get through the vows—which I'd encourage them to ad lib because it would make for some excellent banter. Also, Asta would be the ring bearer.

What two unconnected sleuths would make a great couple?

Richard Castle and Dana Scully. I don't know if they'd make a “great” couple but it would sure be entertaining to watch. Castle would spew his far-fetched theories and Scully would just stare at him. Except that occasionally, when he blamed it on aliens, he'd be right. On second thought, she'd probably kill him. This is why my attempts at matchmaking never work.

At the moment, I'm reading the second book in my own series. And by “reading” I mean “revising.” But when I'm done with that, I have a huge stack of mysteries I brought home from the Malice Domestic mystery conference, plus, several of my friends have new books out that I can't wait to dig in to!

Read an excerpt of Terror in Taffeta here!

Marla Cooper was astonished when, at the age of 18, she realized people could actually get paid to write things. So she switched her major from business to advertising—much to the relief of her accounting professor—and began her career as an advertising copywriter. She later became a freelance writer so she could take advantage of perks like working in her pajamas, and now she writes a little bit of everything. It was while she was ghostwriting a book on destination weddings that she found inspiration for her first novel, Terror in Taffeta. Originally hailing from Texas, Marla lives in Oakland, California, with her husband and her polydactyl tuxedo cat.