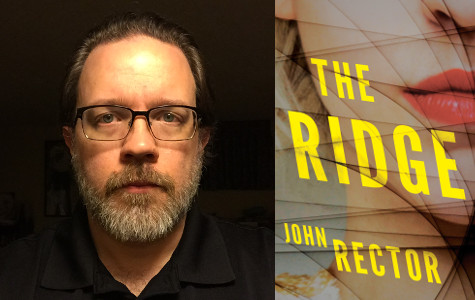 John Rector is a Wall Street Journal and internationally bestselling author. His novels include Ruthless, Out of the Black, Already Gone, The Cold Kiss, and The Grove. Mr. Rector’s award-winning short fiction has appeared in numerous magazines and is collected in The Walls Around Us; his novella, Lost Things, earned him the International Thriller Award. Mr. Rector’s latest, The Ridge (available April 25, 2017), is published by Thomas & Mercer, Amazon’s Mystery/Thriller/Suspense imprint.

Recently, the author generously made time to answer questions about creative inspiration, genre classification, setting serving story, and the inevitable influence of the outside world on fiction.

What inspired you to write The Ridge, and how do you see this book as an evolution of your storytelling?

I wrote a couple short stories back in the early days that took place in suburbia, and I’d always wanted to write a novel set in that kind of cotton-candy environment, so when the idea for The Ridge began to develop, I knew it was the book I was going to write. I also felt like I’d reached a breaking point with crime/thrillers, and I wanted to do something a little different. My favorite stories have always been those slightly off-kilter, Twilight Zone, Black Mirror, Tales from the Crypt-type of stories, so The Ridge felt like a natural step—more like a homecoming than an evolution. This title has been called “domestic suspense.” How do you feel about such genre classifications, and in what ways do you see your work as transcending the proverbial box?

Genre tags like “Domestic Suspense” are for publishers and booksellers to sell your book. I don’t have much of a say in how my novels are labeled and sold, which is fine by me. Those guys know a hell of a lot more than I do about selling books, so as long as they’re happy, I’m happy.

When someone asks me what kind of books I write, I tell them I write suspense novels because that’s the thread that runs through them all, even though everything else might be up for grabs. That said, I don’t see my work necessarily transcending genre, but some of the books can definitely be tough to pin down. My first novel, The Grove, was initially rejected by every publisher in New York because they thought it was too “in-between genres” and didn’t know how to sell it. The Ridge isn’t quite as free rolling as The Grove when it comes to ignoring genre conventions, but it is the first book since that one where I didn’t try to reign the story in when it wanted to go in a direction I wasn’t expecting.

You use Willow Ridge—aka suburbia—as the backdrop for this tale. In what ways does setting enhance narrative, and how do you see small towns as allowing for a different kind of tension than big cities?

To me, everything serves the story, and the setting is just another tool to use. I always try to write the settings of my novels the way my characters see them rather than the way I see them. If they’re upset, I like the setting to reflect that. I’m not saying it needs to be raining or anything so dull and obvious, but a character’s impression of their surroundings can be subtly filtered through their mood. A sunny spring morning can be angry or sad or creepy if you choose the right details.

As far as different tension in small towns compared to urban environments, it’s all the same. Tension comes out of your character’s reaction to adversity more than any specific location. Whether your story takes place in a city or on a farm or in an isolated forest on another planet, the choices your character makes and how they react to their situation is what’s going to build tension and pull the reader into your story.

We live within a constant news cycle that highlights the everyday horrors we perpetuate against one another. How is this story reflective of the times, and in what ways do you endeavor to balance timeliness with timelessness?

Honestly, I never think about this kind of thing. My goal is to write an engaging story that will entertain readers, keep them turning the pages, and hopefully elicit emotion. But, as a thinking human being living in this day and age, I don’t believe it’s possible to keep the outside world from being filtered through and ending up on the page in some ways—although it’s definitely not something I’d ever think about doing intentionally.

I don’t set out to comment on social issues. That kind of thing is everywhere these days, and I have no desire to join that world of white noise. All I set out to do with my work is write characters I can relate to, and then put them in really bad situations to see how they react. To me, it’s that primal response that interests me. The world around us changes on a daily basis, but the emotion a woman feels when she notices a man twice her size following her through a deserted parking lot at night is timeless.

In addition to novels, you are a veteran of short fiction. How are the disciplines unique in execution, and conversely, in what ways do they inform one another? Also, how do you determine which format an idea warrants?

Short stories, if done well, will teach you how to write scenes and develop characters in a limited space. They’ll also teach you how to be concise and focused in your writing, and that will make you a better novelist. With short fiction, I believe every line you put down should reveal character, increase tension, or move the story forward. If it doesn’t, it should be cut. With novels, you have a little more room to play around and explore because long fiction is more about scenes than individual lines, though the basic idea is the same. If you have a scene in a novel that doesn’t perform a function and serve the story, that scene needs to go no matter how much you love it.

A meteor, a map, and a quest into the desert.

John Rector is the bestselling author of the novels The Cold Kiss, The Grove, Already Gone, Out of the Black, and Ruthless. His short fiction has appeared in numerous magazines and has won several awards, including the International Thriller Award for his novella, Lost Things. He lives in Omaha, Nebraska.