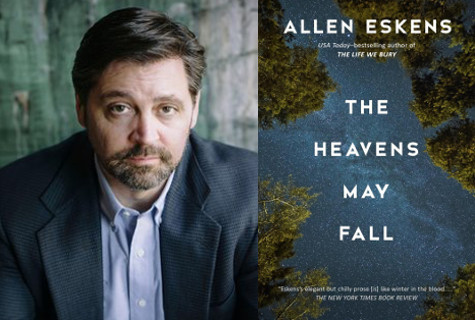 Allen Eskens is a criminal defense attorney and the author of The Heavens May Fall. (Available today!) With a schedule like that, it seems like it'd be hard to do anything else, but Allen kindly took the time to answer some of CrimeHQ's questions about juggling the two professions, what he's currently reading, and what's next for Mr. Eskens.

You’ve been a criminal defense attorney for over 20 years. Do the cases you work on in real life inspire the cases in your books?

There are small aspects of my legal practice that makes it into my novels, but none of my novels are based upon specific cases. I put a lot of emphasis on the characters and the relationships in my books, so much of my mystery plot will be born out of those relationships and those characters. Did you originally plan to write the book from two perspectives or did the story force your hand?

I conceived the plot for The Heavens May Fall like a Schrodinger’s-cat problem—the idea that something can exist in two opposing states at the same time (i.e., be both alive and dead). For a mystery novel, it’s the idea that a person can be both guilty and innocent at the same time. To meet this challenge, I wanted the two opposing perspectives through which the reader would experience the novel: one perspective believing that the accused is guilty, the other believing the accused to be innocent. So the two perspectives were integral to the story from the very beginning.

What was the hardest part of writing The Heavens May Fall?

The hardest part of writing The Heavens May Fall was figuring out the best way to feed exposition to the reader when I have both an investigation and a trial. There were important facts and clues that could have been placed in either arena. In the end, I focused on the character aspect of the story and at which point in the novel the reveal would have the most dramatic impact on the characters.

What is your favorite line from The Heavens May Fall and why?

It’s actually the title. I really enjoyed researching and writing about the history of the book’s title. It comes from a Latin phrase that states: Let Justice Be Done Though the Heavens May Fall. That line is a theme in the novel, and in the book, I give an abbreviated version of the story of the Scottsboro Boys—a tale that highlights the weight of that phrase.

What’s next for Allen Eskens?

What are you currently reading? What book(s) did you just finish?

I just finished Jeffrey Archer’s Mightier Than the Sword, and I am about to start True Grit by Charles Portis.

What shows have you been bingeing on Netflix?

When I was writing The Life We Bury, I turned off my Netflix. With both a law practice and a new writing career, I seriously do not have the time to watch much television. I’ll leave the Netflix off until I can retire from the law practice and focus exclusively on writing.

What’s your murder weapon of choice?

I like the cleanliness, suddenness, and destructive power of a gun.

Allen Eskens is the award-winning and USA Today–bestselling author of The Life We Bury, The Guise of Another, and The Heavens May Fall. A criminal-defense attorney for twenty-five years, he lives with his wife in Minnesota, where he is a member of the Twin Cities Sisters in Crime.