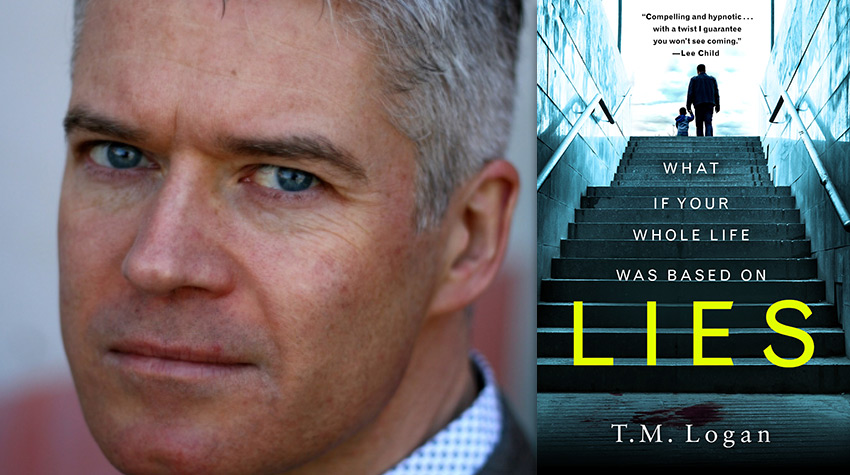 T. M. Logan was a national newspaper journalist before transitioning to writing fiction fulltime. His debut novel, Lies, was one of Amazon UK’s biggest ebooks of 2017, selling more than 330,000 copies and garnering in excess of 1,300 5-star reader reviews. The title has since been sold to 10 other countries, including the United States (where it is available September 11). His next thriller, 29 Seconds, will be released in America for summer 2019. Logan makes his home in Nottinghamshire, UK, with his wife and children.

Recently, the author kindly endeavoured to answer questions about his inspiration for embracing fiction, how being a husband and father informs his storytelling, the ways in which he juggles plotting with pantsing, why he chose to remain a “closeted” writer until publication, and how his background in journalism proved beneficial in the transition to novelist. Logan also offered a preview of what readers can expect next.

Lies is your debut novel. What inspired you to embrace fiction? Also, were there any lessons learned in the process that were particularly advantageous to your approach in writing 29 Seconds?

I’ve always been writing, fiction or otherwise, as far back as I can remember. It was only when I hit my mid-30s that I realized I needed to get serious if I was ever going to have a chance of being published—which meant devoting proper time to it, writing every day, and trying to finish a full-length novel.

That first book is still unpublished and sitting in my bottom drawer, but I learned a huge amount while writing it, which I was able to put into the next book: my debut thriller, Lies. Writing Lies also provided valuable lessons in terms of pacing, character, and plot as well as the editing process and using feedback to make the book better. One thing in particular that helped in the writing of 29 Seconds was getting into the habit of looking at the story as a reader as opposed to a writer so that the narrative makes sense in terms of the choices characters make and the events that take place.

Like the protagonist of Lies, you are a husband and father. In what ways did those roles influence your storytelling, and how do you endeavor to tell essential familial truths through the lens of make-believe?

Being a husband and father has been a huge influence on me and my writing. Being a parent (I have two kids, ages 18 and 15) is probably the single most formative aspect of my life and reaches deep into everything I’ve written so far. With Lies, I wanted to express that through Joe’s story. He’s always trying to put his son first and do what’s best for him; he’s a devoted father and has perhaps put that role above everything else in his life.

But parenthood can affect people in different ways—what if one partner feels pushed into second place by that bond of love? What if we let love for our children blind us to other things that might be going on in a marriage? What terrible things are we prepared to do for our children? These are all fertile areas for the fiction writer to explore.

Joe’s son, William, is actually based on my son, Tom, when he was that age. He was delighted when he recognized himself on the page! 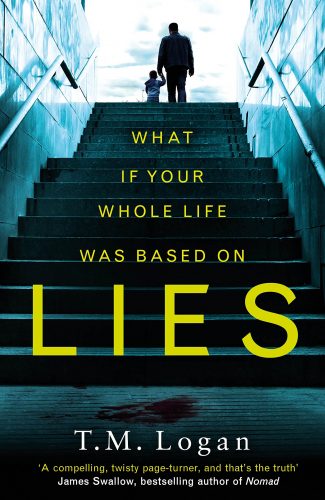 Truth, or the perception of it, is continually redefined as the narrative unfolds. Are you a plotter or a pantser, and how do you feel that your approach is advantageous to the creation and maintenance of suspense?

I’m a plotter. I tend to plot around 75% of the story, so I know most of the key turning points along the way. That helps me in terms of knowing the overall framework, but it still allows for additional twists and surprises thrown up by the characters and the story as it develops. I’m always conscious that thriller and suspense writers need to tread the line between surprise and believability—to give the reader plenty of shocks but keep it plausible at the same time. Mapping out the key turns in the story helps me to find that balance more easily because I can see what comes before and after, against the overall arc of the story.

Having said that, I’m envious of pantsers who make it up as they go along. I think it was Stephen King who said that if he’s surprised by how things turn out, then the reader will be too. He seems to have done OK with that approach!

You used to refer to yourself as a “secret writer.” Obviously, that’s no longer the case. What have been the most profound adjustments since being “outed”? Do you have any advice to share with those who remain undercover scribes?

The biggest adjustment since being “outed” is talking about writing with anyone and everyone, which is lovely. To hear from readers who’ve enjoyed the books has been just brilliant. But for about 10 years, only close family and a few friends knew that I was writing in my spare time and trying to get a novel finished. There were two reasons for that: first, I knew the chances of getting published were very slim, and I didn’t want to set myself up to fail in public. Second, I had no idea how long it would take, and I didn’t want the constant refrain of “How’s the book going?” from everyone I knew, every time I saw them.

To other secret writers out there, I think it’s very much a personal choice as to whether you keep your work under wraps (I chose that path, but I may be a bit weird about these things). I know other writers who were upfront about it well before they were published—the advantage being that they got valuable feedback before taking it to the next stage. If you can get a small group of four or five beta readers, friends or family, to give constructive feedback on your first drafts, I think that can be hugely helpful as a writer.

You are also a journalist. How does that background inform your research/writing process, and what have been both the greatest liberties and challenges of fiction?

As a journalist, you get used to having your copy tweaked every day by news editors, sub-editors, people who can generally find a way to make your story a little sharper, better, more impactful. It’s a normal part of the process—you come to expect it. That has really helped me as a fiction writer because I’m not thrown by people editing my work to improve it or making suggestions as to how I can improve it myself. In the newsroom, there’s almost always someone smarter and more experienced than you who has good suggestions on how to make your work better. Publishing is no different.

The liberty of fiction is that you can literally make people and lives and stories and whole worlds out of nothing (my daughter refers to what I do as “sitting in the spare room making stuff up,” which is pretty accurate). As long as you respect the reader, as long as the story works, you can create anything. It’s a beautiful freedom to have, and I feel immensely privileged to be able to write fiction for a living. In comparison to newspaper journalism, that freedom is also the greatest challenge—because everything is down to you. There’s nothing to fall back on, no old cuttings in the archive to pad out your copy when you’re a few hundred words short and a deadline is approaching.

29 Seconds, my second standalone thriller, should be out in the USA in summer 2019. It’s a psychological thriller about the boundary between right and wrong—the shades of grey in between the two and the tension between what is just and what is right. It follows the story of Dr. Sarah Haywood, who finds herself in an impossible situation at work with her predatory boss. When a powerful stranger offers an unthinkable solution, she is assured there are no strings attached, no comeback, no way she could ever be implicated.

After that comes my third book, which has the working title The Holiday and should be arriving in the USA in 2020.

Read an excerpt from Lies!

T. M. Logan was born in Berkshire to an English father and a German mother. He studied at Queen Mary and Cardiff universities before becoming a national newspaper journalist. He currently works in communications and lives in Nottinghamshire with his wife and two children. Lies is his first novel.