Q&A with Shari Randall, Author of Against the Claw 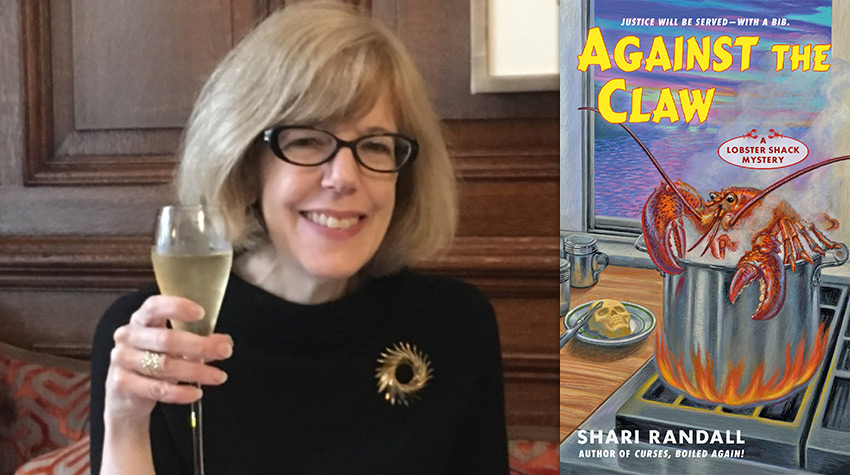 Shari Randall is the author of the Lobster Shack Mystery series, which debuted earlier this year with Curses, Boiled Again!. The second title, Against the Claw, revisits protagonist Allie Larkin as she assists her beloved Aunt Gully with the day-to-day operations of The Lazy Mermaid Lobster Shack—a seemingly straightforward task that repeatedly lands her in hot water. Randall is a military wife and former children’s librarian who currently serves as the Librarian Liaison for Sisters in Crime; she and her husband make their home in Connecticut.

Recently, the author chewed on questions pertaining to the evolution of her series, how her protagonist’s role in the community lends legitimacy to sleuthing, and the addition of recipes to her creative arsenal. She also reflected on her career as a librarian and offered a tantalizing taste of what comes next.

Against the Claw is your second Lobster Shack Mystery. How do you see the story working as both a standalone novel and a continuation of the series’ overall arc?

My protagonist, dancer Allie Larkin, is healing from a broken ankle. Whether or not she can resume her dance career is an open question, but luckily, her amateur sleuthing keeps her busy. She’s out of her cast and can’t go back to her old job quite yet, but she has a featured role in a show at Broadway by the Bay, which plunges us into the world of summer theater. The Lazy Mermaid Lobster Shack where she works has branched out into catering and is going behind the doors of one of the most exclusive parties in New England. As we know, Act Two is when stuff really hits the fan. I thought I put these characters through a lot in book one, but book two. Whew!

Please tell us about Allie’s role in the Mystic Bay community and how this lends a sense of legitimacy to her sleuthing.

The Larkins have been in Mystic Bay for generations. While she heals, Allie works at her Aunt Gully’s Lazy Mermaid Lobster Shack, which is the Cheers of Mystic Bay, Connecticut. Not only does Aunt Gully know your name, she knows who you dated in high school and whose grandfather smuggled booze in their fishing boat during Prohibition. When Allie digs for connections between two murders in Mystic Bay, her position as one of the “Larkin girls” opens a lot of doors. 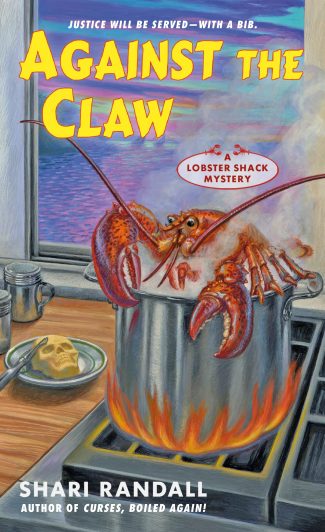 Unlike your debut, this book contains a recipe for “Aunt Gully’s Lobster Love Sauce.” Why did you decide to embrace this cozy tradition, and in what ways can such additional content enhance the reading experience?

Full disclosure: I am not a cook. My favorite cooking tool is a takeout menu. But so many readers asked for recipes that I knew I had to cook something up (sorry!) and add one to Against the Claw. Along with making my readers happy, cooking a lobster put me into the hairnets of the folks working at the lobster shack. Under the watchful eye of my sister-in-law—a former restaurant owner and awesome cook—I prepped and cooked my own lobsters and, along with my long-suffering husband, made an amazing lobster bisque. Take my advice—the best way to prepare a lobster roll, or anything with a lobster, is to go to a lobster shack and enjoy your meal in the sun while looking at the ocean. If you must cook your own lobster, cook it outside because there’s no way around it—lobster is delicious, but lobster smells!

I’m happy knowing that readers can enjoy a recipe that was developed for the Lazy Mermaid. It’s so much fun that readers can experience the story in such a delicious way. I’m currently working on a recipe for book three. Stay tuned!

Tell us about your travels to research seafood and the lifestyle of those who make it their livelihood. In what ways did this inform your creation/depiction of the Lazy Mermaid Lobster Shack, both in terms of its ambiance and its operations?

When I signed my contract for Curses, Boiled Again!, my husband and I embarked on The Great Lobster Shack Tour of 2017. We rode up Route One from Connecticut to the Cape, trying the lobster rolls at a dozen different lobster shacks. Definitely suffering for my art! In addition to the food, I kept track of details from my favorite shacks: the way the screen door never closed at one shack because the line was so long a customer was always standing in it, bedazzled hair nets, and the different types of lobster roll (Maine vs. Connecticut style*). Eating a lobster roll is a true New England summertime treat. I wanted to capture that vacation vibe in my books.

But more than that, the trip was a window into an intense seasonal business with many issues that are great fodder for a mystery: lobstermen protecting their “spots,” encroaching development vs. historic and environmental preservation, and the summer people vs. locals dynamic.

*Maine style lobster rolls are served cold, mixed with mayo and other additions like celery. In Connecticut style lobster rolls, the lobster meat is hot and served with melted butter on a golden toasted hot dog bun. Can you tell which I prefer?

You used to work at a library. How has that experience influenced your reading and writing life? Also, have you found that it’s proved helpful in getting your book into readers’ hands?

I was a children’s librarian, so I read a lot of children’s books. All of the answers to life’s big questions can be found in children’s books. I’ve always maintained a steady diet of mysteries, but working in a library introduced me to nonfiction and authors I might not have ever picked up. How has it influenced my writing life? I’ve discovered that writers can’t read as much as they’d like. You should see my TBR pile! I don’t know if being a librarian has proved helpful in getting my book into readers’ hands, but I’ve discovered that there’s a lot of respect and love for librarians and libraries in the book world.

Now that the Lazy Mermaid Lobster Shack is branching out into the world of catering, Allie’s help is needed more than ever—even on the lobster boat. The last thing she expects to find once she’s out on the bay, however, is the dead body of a beautiful young woman. When days pass and the police can’t ID the corpse, Allie takes it upon herself to learn the truth about what happened. Her investigation leads her all the way from the local piers to the secluded estates of Mystic Bay’s elite. But how can she crack the case when everyone seems dead-set on keeping their secrets beneath the surface?

Read an excerpt from Against the Claw!

A librarian and military wife, Shari Randall lives in a mid-century money pit in Connecticut. When she’s not committing murder (on the page, of course), Shari enjoys walking the beach near her house, traveling and eating the local cuisine, reading, and dancing. When she isn't writing the Lobster Shack Mysteries, she is the Library Liaison for Sisters in Crime.