February 10, 2022
We spoke with author Mariko Tamaki about her new YA novel, Cold. Read on for our conversation about the book, a new imprint Mariko is launching, and much more!

Congratulations on the publication of your new novel, Cold! Can you give us a little teaser as to what this book is about?

Mariko Tamaki: Thank you! Cold is about two teens connected to a murder. One is the murder victim, Todd, and the other is a teenager, Georgia, who finds out about the murder of what feels like a random teenager and then discovers a bunch of different connections between his death and her world.

You’ve written and created graphic novels in the past, but to our knowledge, this is your first work that grapples specifically with murder. What spurred you to write this kind of story?

Mariko Tamaki: I’ve written about murder quite a bit in the last year or so, writing the Batman Detective Comics series for DC Comics. But I guess that skews more “superhero” than “murder.” I was mostly drawn to this genre because I’m a fan of mysteries, in pretty much any medium. In the last few years I’ve started reading a lot of books by Karin Slaughter, Jane Harper, and Tana French. I devour those. And part of me thought a murder mystery would be an awesome challenge. Like starting this book, I had no idea how I would put together a plot with an actual mystery in it. And in the end figuring out it was like finishing a kind of writer marathon. A writer Olympics!

One of the interesting narrative techniques in Cold is the dual perspectives that are at play. What was it like to alter between the perspectives of your protagonists? (i.e. one who is a young girl, and the other who is a murdered boy)

Mariko Tamaki: I started drafts (many, many drafts) of this book that only used one perspective. There was even one that was just the detectives’ POV. But each of them felt like I was running into the wall of all the things I wanted to see in the story. I really wanted this book to be about a certain experience of being a teenager, more than just the story of a crime. And so going back and forth between these two kids who have two versions of the same outsider experience just seemed to be what was needed. I think telling the story this way opened up the theme of being alone versus feeling alone.

Both Todd and Georgia are queer characters. In your experience, has anything changed in terms of how LGBTQ+ characters are being written today, as opposed to a few years ago?

Mariko Tamaki: Oh I think a lot has changed because the experience of being a queer teen has changed so much in the past even ten years. Which is to say the language we have for talking about queerness and gender has expanded and is acknowledged by a broader range of people. Also, there are far more narratives of queer life, diverse narratives we’re getting from diverse writers.

Are there some things you need to remind yourself of when writing for a younger audience? It would seem that exploring serious themes, including murder, could prove to be a delicate balancing act.

Mariko Tamaki: There are a lot of conversations to be had around the act of writing FOR teenagers. I’ve had many discussions, valuable discussions, about the kind of prescriptive elements that go with writing for a teen audience. Like, one conversation I’ve had is, what am I telling teens about what their experiences as teens could or should be with this book. I tend to think that I’m not telling teens anything they don’t know. Really, I try to focus on writing for teens as a descriptive exercise. I try to be honest to the experiences I had, to what it felt like to be a teen when I was a teen. I try to be empathetic and open to all the feelings and details that go with that. I feel like if I can try to be true to that story, I’m not making up anything to make a point.

Were you inspired by any crime/mystery authors while you were writing Cold?

Mariko Tamaki: I’m always inspired by what I’m reading, so it’s possible my mystery reading habits (mentioned earlier) are in there. I’ve also been inspired by writers like Alice Munro, Timothy Findley, Joan Didion, and Tony Kushner. Probably a lot of Canadian inspiration in this even just in terms of the weather (cold). I’m inspired by my friends and my girlfriend. It’s a whole fruit salad of inspiration.

We learned that you recently launched a new LGBTQ+ imprint with Abrams. Congrats again! What has that process been like, and can we expect more mysteries from you (or your imprint)?

Mariko Tamaki: OH! That would be great! Someone should definitely pitch a mystery graphic novel! I think the closest we come to a murder mystery is the Patricia Highsmith graphic novel, which is incredible by the way, created by Grace Ellis and Hannah Templer, Flung Out of Space. I love editing and it’s been a great gift to be able to work with other writers on their stories these past years.

What’s one piece of advice for young aspiring writers/creatives out there?

Mariko Tamaki: Ah there’s never just one. Some smaller bits I’d say: Keep writing. Keep a diary. Write small things you can finish. Don’t be afraid to get notes. Learn which notes are helpful and which aren’t.

Time for some quick silly questions. You have to choose a literary villain to be your roommate—who are you choosing?

Mariko Tamaki: Someone who isn’t a slob? I feel like most villains would be. OH! I recently reread Watership Down. Maybe one of the mean bunnies from Watership Down. Then even if he was evil, I could keep him in my living room with a bunch of computer cords to chew up and it wouldn’t be so bad?

Desert Island! You can take one mystery, thriller or crime novel, one suspense movie, and one album (any genre). What are you bringing?

Mariko Tamaki: Gosh. I honestly can’t think of how I would just watch one movie over and over and not go completely out of my mind.

Read an excerpt from Cold by Mariko Tamaki 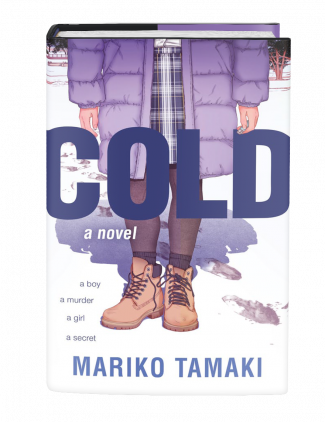 About Cold by Mariko Tamaki:

Todd Mayer is dead. Now a ghost, hovering over his body, recently discovered in a snow covered park, naked and frozen. As detectives investigate Todd’s homicide, talking to the very people linked to the events leading to his death, Todd replays the choice that led him to his end.

Georgia didn’t know Todd. But ever since she heard about his death, she can’t stop thinking about him. Maybe because they’re both outcasts at their school, or because they’re both queer. Maybe because the story of Todd people keep telling feels like a lot of fake stories Georgia has heard people tell. Plus Georgia has a feeling she’s seen Todd somewhere before, somewhere he wasn’t supposed to be.

Told through the voices of Todd in his afterlife and Georgia as she uncovers the truth behind his death, Cold is an immersive, emotional, and provocative read.