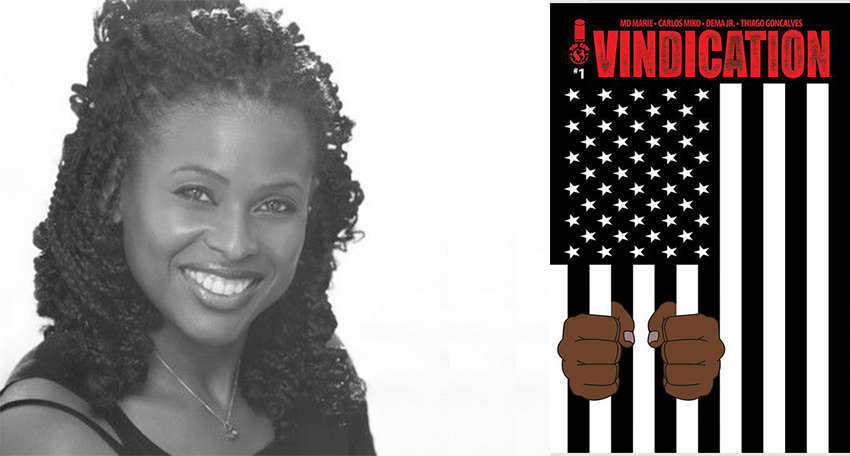 Crime fiction is like a healthy and great-tasting dessert: the frosting is in the exciting twists and turns, but the “cake” at the heart of this genre we love usually relates to flawed institutions, especially those that are failing people or being gamed by the rich and powerful. So at its best, crime fiction is a genre that’s both fun and powerful. That’s exactly the type of story writer MD Marie and artists Carlos Miko and Dema Jr. set out to bring to life in their four-issue comic series Vindication from Image Comics Top Cow Imprint. The L.A. County-based story, which kicks off in February, follows an African American man, who after being exonerated from a murder charge is released from prison, and a white detective who is still obsessed with proving him guilty.

It’s a perfect recipe for a hard-hitting crime story, and it excited me because it’s being told via the medium of comic books, which can convey emotion, action, and imagination like no other medium. So I reached out to Marie to find out more about the book and obtained some preview art. 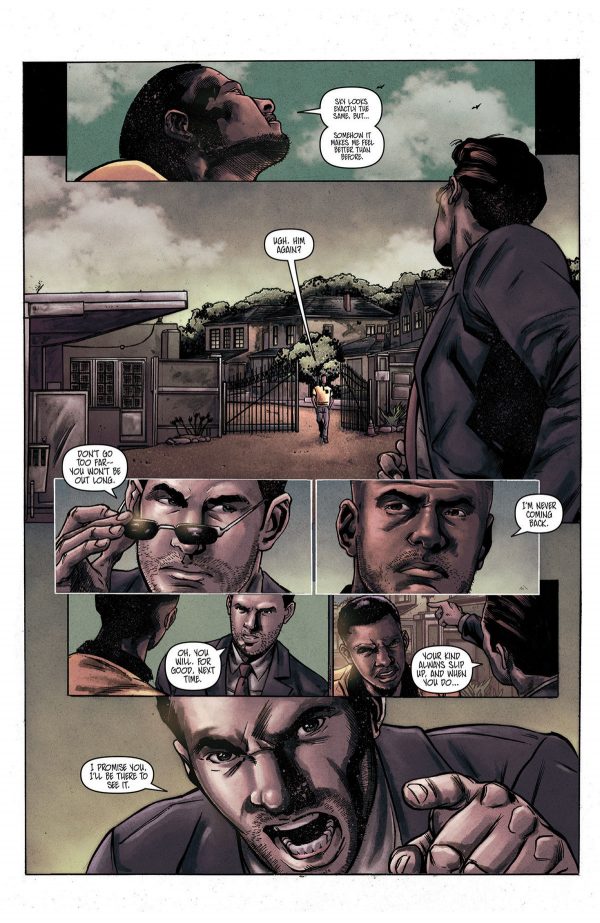 “As time went on, I started writing female characters and exploring different types of strengths females possessed and I wanted to articulate that.”

Vindication is not Marie’s first piece of published fiction, but it is her first crime fiction and comic tale. Her debut novel was the independently published Steampunk prose tale, The Saints of Winter Valley, which featured a primarily female cast of characters. “When I was younger and first started writing I wrote male-lead, character-driven stories that were more like psychological thrillers. As time went on, I started writing female characters and exploring different types of strengths females possessed and I wanted to articulate that; I stuck with that ever since,” Marie explained. “When I was offered the opportunity to go back to writing male characters, I was excited. I wanted to write this story because I thought I could offer a fresh spin on a time-old tale of ‘cops and criminals.’”

With Vindication, Marie is looking to tell a classic crime drama and murder mystery that examines the broken elements of our criminal justice system. The writer hopes her story shows how human behavior is correlated to a look or a title instead of to a person.

The protagonists of Vindication are Turn Washington, an African American man exonerated of a murder charge, and Detective Chip Christopher, a white police officer. Separated by an age difference and Christopher’s chosen profession, the two men share a common bond in that they both grew up in the same neighborhood and knew many of the same people. “Every character I write is a facet of my own personality,” Marie said. “Writing Chip was fun and a learning experience for me because he’s complex. He’s not every cop you’ve seen in movies or on TV. Writing Turn was also a fun learning experience because I got to write a character who resembles people whom I know.

The mystery of the murders Turn became embroiled in and Detective Christopher’s obsession with the murders will unfold over the course of Vindication‘s four issues. The book features an eclectic cast of characters, many of whom are hiding in plain sight. One of Marie’s favorite aspects of the series is the way her collaborators, artists Carlos Miko and Dema Jr., are bringing those characters to life. “What I loved most about their work was how much they invested themselves into it; the artists even included their own images in one of the issues,” Marie stated. “I was flattered and honored.”

Vindication #1 hit stores in early February. If you’re interested in the series you can reach out to your local comic store—they also can suggest other compelling crime comics. If you prefer digital comics, the full Vindication series will be available through outlets such as Comixology.