Q&A with Laurie Petrou, Author of Sister of Mine 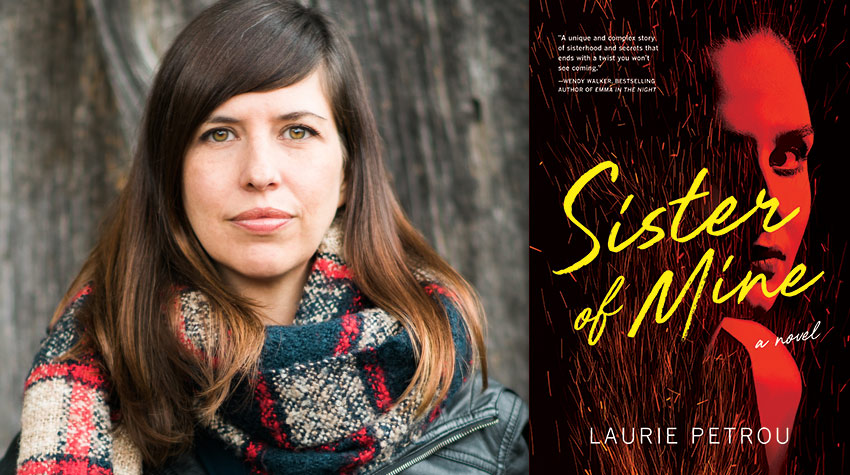 Laurie Petrou is the author of the short story collection Between (2006), which was a Globe and Mail Top 100 Book (Top 5 First Fiction). She is also an associate professor at the RTA School of Media at Ryerson University in Toronto and an “artist/maker.” Petrou won the inaugural Half the World Global Literati Award for her then-unpublished novel Sister of Mine in 2016; a refined version of that work is now available from Crooked Lane Books.

The author kindly considered questions pertaining to the evolution of her novel, the compelling nature of the dynamic between sisters, and how the appearance of a charming young man upsets that balance. Petrou also offered insights on plotting vs. pantsing, the differences between conceiving short stories and novels, and what she’s working on now.

Sister of Mine won the 2016 Half the World Global Literati Award. In what ways did that recognition influence your path to publication? Also, can you reflect a bit on that manuscript’s evolution from then to final product?

That award was huge for me. I can’t even put into words what a difference it made in terms of my confidence—something much-needed at the time—not to mention the size of the award, financially, which was great. But mainly, it shone a light on the book, and that’s when things became real. HarperCollins Canada bought it not long after that, which was life-changing for me, and then Crooked Lane Books purchased it in a two-book deal, which was so exciting.

The book has been hugely refined with the help of my editors both in Canada and the U.S. They worked with me and in conjunction with each other’s notes so that what I changed, revised, and refined was almost entirely the same in both editions. I’ve written elsewhere about the value of editors, but I’ll say it again: they are the unsung heroes of every story.

Sister of Mine has evolved, I would say, in its tension. From earlier drafts to now, I’ve dialed up the dread factor.

Penny and Hattie are sisters with a secret. Why is this particular relationship dynamic so compelling, and how does their shared history influence the narrative’s unfolding?

These two cannot just “unfriend” each other. They are sisters. They are family. And in addition to whatever we generally feel about the bonds of family and blood, these two sisters became orphans at a transitional time in their lives and their relationship. Penny went off to school in an effort to leave her town and family, and Hattie was stuck in their big old house alone. When their mother dies while Hattie is home, Penny becomes both her savior and an eternal reminder of her shortcomings and deep-seated feelings of inadequacy. And I haven’t even gotten to their shared secret yet! So yes, suffice it to say that these two cannot easily shed one another. 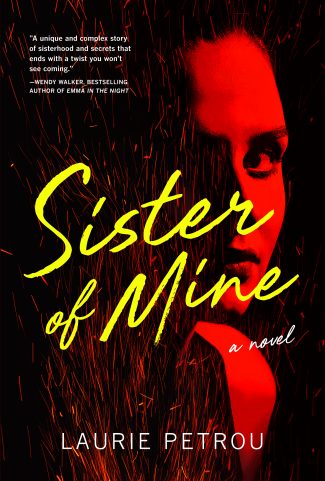 The arrival of a charming young man upsets the sisters’ seeming symbiosis. In what ways does this triangle serve to heighten the suspense, and how does it allow you to explore the fine lines that often exist between love and hate?

Penny is torn between allowing a new person to distract her sister and give her some much-needed space and envying all that Hattie has always represented: beauty, whimsy, fun. Penny takes charge both because she must and because control is her only way of masking her feelings of hurt and betrayal. Many readers have said that they couldn’t decide which sister they loved or hated more and that it changes throughout. The sisters ride that line over the decades of the book, and they evolve into people they probably never would have expected from the outset.

Your book has been lauded for its unpredictable plot twists. Are you a plotter or a pantser, and how do you find that your approach lends itself to coming up with a conclusion that’s both surprising and satisfying?

I don’t know what a pantser is. Wait, OK, I just looked it up. Do I plot things out or let the book go by the seat of my pants? I would say a bit of both. It’s like knowing what you want to bake and having the ingredients, but then as you work, you wonder what would happen if you threw some spice in there or changed the order. OK, maybe baking isn’t the best metaphor, seeing as it is essentially a science and you can’t, for instance, not crack the eggs. Yes, planning is absolutely needed from the outset to get the terrible first draft onto the page. After that, there is more wiggle room, more feeling it out. That’s when surprises can happen.

You previously published a collection of stories. Can you briefly compare the similarities and differences of writing a short piece vs. a novel? Also, how do you know which format an idea demands to be told in?

Short stories, to me, allow a writer to drop into a world and take a snapshot. My stories are very short. In a short story, I can do some of my favorite kinds of prose without having to worry about the actual nuts and bolts of plot or pacing in the same way. I feel like I can dally, be poetic, and either zoom in very close or skip details and play with time. That said, I can’t see myself returning to short stories for a while. I love writing novels so much now. What, at first, I saw as a challenge, I now see as a much larger canvas. That said, sometimes I’ll work out an idea as a story to see if it has legs.

I love relationships, so I’ll keep exploring those: toxic, close, loving, codependent, and all the in between. I’ll give you this—my next book will surprise you. It will also make you cringe, ache, and think twice.

Laurie Petrou is an associate professor at the RTA School of Media at Ryerson University in Toronto. Her first book, a collection of short stories titled Between (Pedlar Press, 2006), was a Globe and Mail Top 100 Book (Top 5 First Fiction). She is the inaugural winner of the 2016 Half the World Global Literati Award for her then-unpublished novel Sister of Mine.