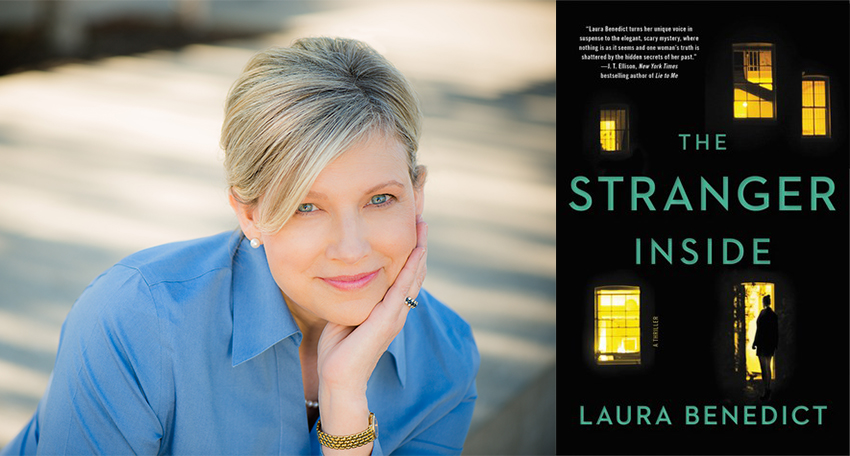 Laura Benedict is the Edgar- and ITW Thriller Award-nominated author of eight novels of suspense, ranging from the cozy charms of Small Town Trouble (for the Familiar Legacy series) to her Bliss House gothic trilogy. Her short fiction has appeared in Ellery Queen’s Mystery Magazine as well as anthologies including Thrillers: 100 Must-Reads, The Lineup: 20 Provocative Women Writers, and St. Louis Noir. Ms. Benedict’s newest, The Stranger Inside (available February 5, 2019), is a standalone thriller, and earned a starred review from Publishers Weekly.

About The Stranger Inside

There’s a stranger living in Kimber Hannon’s house. He tells the police that he has every right to be there, and he has the paperwork to prove it. But Kimber definitely didn’t invite this man to move in. He tells her that he knows something about her, and he wants everyone else to know it too.

These words reveal a connection to Kimber’s distant past, and dark secrets she’d long ago left buried. This trespasser isn’t after anything as simple as her money or her charming Craftsman bungalow. He wants to move into her carefully orchestrated life–and destroy it.

Recently, the author generously answered questions about her creative inspiration, the complexities of writing an unreliable narrator, balancing likability with believability when developing her protagonist, plotting dual storylines, and how her storytelling benefits from writing across subgenres. She also offered a glimpse of what comes next.

The Stranger Inside’s premise is both simple and terrifying. Tell us: What inspired this idea, and how does it serve as a potent, organic catalyst for suspense?

Thanks so much for inviting me to visit Criminal Element!

Organic is definitely the word for what inspired The Stranger Inside. For years I’ve had dreams about people trying to get inside my house. They’ll often camp on our land, or collect on the front porch, pawing at the windows—and if that sounds like a scene from a zombie movie, that’s exactly what it feels like. In my dreams, I’m always on the inside trying to keep them out. For the novel, I decided to reverse that situation and put myself on the outside, and the stranger on the inside. It’s not an uncommon fear, I think. Many readers have told me that they also have a fear of coming home and finding someone in their house.

Kimber Hannon is an unreliable narrator. What appealed to you about this approach, and was there any hesitation to engage given the proliferation of this narrative “device” in recent years? Also, did you find that utilizing this strategy meant needing to know Kimber more intimately than you might a less complex character?

When I started writing Kimber, I didn’t set out to make her an unreliable narrator. She showed up that way and I went with it. As a writer, I find characters that show up with strong personalities to be a real blessing. As for unreliable narrators in general—particularly contemporary ones—I get frustrated with stories in which the reader isn’t allowed to know that the narrator has been lying until they get to the end of the book. (Though maybe that’s because I haven’t written one yet!) Kimber’s credibility is noticeably questionable beginning in the first twenty pages. Her little (and big) omissions and manipulations come so naturally to her that I don’t think she always realizes that she’s doing it. Because Kimber showed up with built-in credibility issues, I found it far more difficult to discover and write her more laudable characteristics, so I definitely spent more time trying to get to know her.

Speaking of Kimber’s complexities: How do you balance likability with believability when creating a compelling protagonist, and why do you think readers will root for Kimber despite her flaws?

Kimber isn’t exactly Miss Congeniality, so this is an excellent question. In my own life, I’ve spent way, way too much energy attempting to ensure that people will like me. What I’ve discovered is that it’s an impossible task and a total waste of time. In writing a character, there’s a lot of guesswork involved in creating a complex protagonist, including figuring out which character flaws might push a reader over the line between love/hate and into just plain hate. As a reader, I want to see that even the most complicated characters have redeeming qualities. That they have the potential to be redeemed and/or approved of by society. Kimber is tough because she’s seen herself as a victim for a very long time, and she has a bad habit of wanting to make others suffer as well. But I believe readers can root for her because she is recognizably human in her foibles and mistakes. She makes great strides in self-understanding and in realizing how she can stop hurting others.

Kimber has an unorthodox family life and is haunted by her sister’s long-ago death. How does this history enhance the collision of past and present events, and what was your plotting process like to account for these dual storylines?

Writing dual storylines is a lot of fun, and I’ve done it in several books. Kimber’s guilt about Michelle’s death is one of the primary reasons Kimber has felt unworthy and has acted out her entire life. Her terror of appearing weak is a result of her father’s abandoning her. These are among the worst things that ever happened to her, so it makes sense to me that the resolution of those two events will the agents of her renewal. I spent a lot of time creating timelines to keep things straight. They’re basically two near-complete stories, so when I wrote the first couple of drafts, I worked them out separately, then pulled them together, blending details.

You have written in several different subgenres of mystery/suspense (including thriller, cozy, and gothic). What are the underlying commonalities and differences between them, and how do you feel that your dexterity has benefited your storytelling, regardless of conventions?

Every good book has a mystery at its heart. A question is posed at the beginning, and the answer is revealed by the end. As a reader, I need to feel compelled to turn pages because I have to know what’s going to happen on the next page, regardless of the genre. Looking at the difference between a mystery and a thriller, I like the oversimplified definition that says a mystery is a whodunit, and a thriller is a howdunit. We also expect the pacing of a thriller to be much quicker than that of a traditional or cozy mystery, and the violence in a cozy mystery to be off-scene or less graphic than either. (Cozies feature amateurs solving the mystery or crime.) What I love about the gothic genre is its flexibility. You can write a gothic thriller, a gothic mystery, a gothic cozy. In recent years I’ve encountered many writers who don’t read widely, preferring to read only in the genre they’re interested in writing. The more widely one reads and writes, the more tools a writer has at their disposal. I love to be able to tell a story using whatever genre best suits it, and having the conventions of other genres at my fingertips helps me give the story a spin or two that makes my work a bit different and, I hope, appealing.

I’m honored to have a story in Lawrence Block’s At Home in the Dark anthology, which comes out this spring. My story, This Strange Bargain, might be described as Hansel and Gretel meet Shirley Jackson’s The Lottery. There’s also another suspense novel in the works. 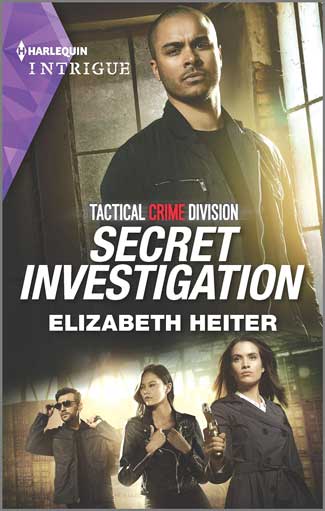 Secret Investigation by Elizabeth Heiter is the second book in the Tactical Crime Division series, where agent and former ranger Davis Rogers asks to go undercover to find the traitor responsible for the death of one of his friends, and Petrov Armor CEO Leila Petrov is happy to provide access to her company—especially once she…