Q&A with Graham Hurley, author of Last Flight to Stalingrad

July 2, 2021
Read on for our interview with Graham Hurley, author of Last Flight to Stalingrad, a WWII thriller out now in paperback.

Plus: Leave a comment on this post to enter for a chance to win a copy of Last Flight to Stalingrad!

Congratulations on the publication of Last Flight to Stalingrad, the 5th book in your Spoils of War (Wars Within) series from Head of Zeus. What can readers expect from this installment in the series?

Graham Hurley: This is a book about the lies, big and small, that created and sustained the Third Reich. It explores what happens when the no-man’s-land between truth and fiction becomes contested, a journey that ends in Germany’s biggest defeat at the battle of Stalingrad. This is a disaster that even the Minister for Propaganda can’t turn to Germany’s advantage. Or so everyone thinks…

Last Flight to Stalingrad follows Ministry of Propaganda journalist Werner Nehmann as he carries out an order for Joseph Goebbels, the Minister of Propaganda under the Third Reich. Why were you drawn to write from the perspective of a journalist in this era?

GH: All fiction, says me, is an act of trespass. You’re venturing into someone else’s world, onto someone else’s territory, hence the incessant need for research. But I’ve been a journalist myself and I think I understand how vulnerable we all are to the power of fake news. This is the way that whole societies change in front of our very eyes. Hence my fascination with this conjuring trick—then, thanks to the likes of Joseph Goebbels, and now with fakers like Trump and chancers like Boris Johnson. The truth is worth protecting. As recent history, in the shape of the Third Reich, so conclusively proves.

What was your research process like for Last Flight to Stalingrad?

GH: My knowledge of the battle of Stalingrad comes from endless research, chiefly that ever-growing stack of first-person accounts, historical fiction, and contemporary re-analysis bred by the conflict. Alas, my wife Lin and I never made it to Stalingrad itself but we’re on good terms with Berlin, Hamburg, Kiel, Munich, Warsaw, and Kiev. Paris, L’Orient, Le Havre, Dieppe, and many of the other cities that feature throughout the series.

Do you personally read historical fiction? If so, who are some of your favorite authors in the genre?

GH: I’ve always been a huge fan of Len Deighton, and I thought Winter was wonderful in its ambition and sheer reach. Likewise, with a tighter focus, Bomber. German authors have an obvious closeness to the voltage of those years of war, and I’ve loved reading Hans Fallada, especially Alone in Berlin. Ditto Heinrich Gerlach’s Breakout at Stalingrad.

What first intrigued you to write about WWII?

GH: My father fought with the RAF during the war, and my mum was under the blitz in London, and my reading as a kid (without a TV in the house) was dominated by fact and fiction from writers who’d drawn heavily on either first-hand experience or the stories of others. As a TV documentary maker, I was lucky enough to meet and memorialise dozens of veterans from key moments in the war, and over the years I gradually joined up all these random dots until I felt confident enough to hazard a little fiction of my own. Since then, as an ex-crime writer, I’ve never looked back.

What is your favorite book, movie, or series about WWII?

The sixth and final installment in the Spoils of War series, Kyiv, is set to publish next month from Head of Zeus. Can you give us any teasers about that final chapter in the series?

GH: Kyiv is a special book for both myself and my wife. Lin discovered the core idea during a stay in the city, and I couldn’t resist exploring it further. The result, says me, is a substantial addition to the series, and has provoked my publisher into insisting on further titles. A teaser? The Germans are feasting on the Soviet Union and nothing will keep them from devouring the capital of the Ukraine. But

Kyiv will be a bone in the throat of the all-conquering Wehrmacht armies. Why? How? Read on…

Do you have anything in the works after the Spoils of War (Wars Within) series concludes?

GH: After Kyiv, comes Katastrophe, a story set in the early months of 1945, with the Russians at the gates of a ruined Berlin, the Western armies still pushing to be first to the capital of the Reich, and Moscow preparing for a new confrontation after the defeat of Nazi Germany. This book features both Werner Nehmann and Willi Schultz, two years after the events of Last Flight to Stalingrad.  After that, I’m drawing a bead on the catastrophic Dieppe Raid, when thousands of unblooded Canadian infantry paid for political chaos and tactical blunders with their lives. Title? As yet unknown. Research? Nearly complete. Page one? About to happen… 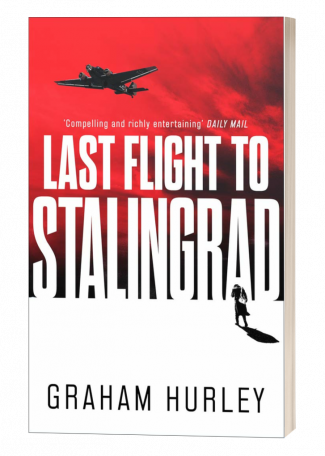 Last Flight to Stalingrad Comment Sweepstakes: NO PURCHASE NECESSARY TO ENTER OR WIN.  A purchase does not improve your chances of winning.  Sweepstakes open to legal residents of 50 United States, D.C., and Canada (excluding Quebec), who are 18 years or older as of the date of entry.  To enter, complete the “Post a Comment” entry at https://www.criminalelement.com/qa-with-graham-hurley-author-of-last-flight-to-stalingrad/ beginning at 3:00 p.m. Eastern Time (ET) July 2, 2021. Sweepstakes ends at 2:59 p.m. ET July 16, 2021. Void outside the United States and Canada and where prohibited by law. Please see full details and official rules here. Sponsor: Macmillan, 120 Broadway, New York, NY 10271.