Read an exclusive Q&A with David Rosenfelt, author of the Andy Carpenter series, and make sure to sign in and comment below for a chance to win the 16th in the series, Collared!

David Rosenfelt is the former marketing president for Tri-Star Pictures. Now, he is the acclaimed author of the Andy Carpenter series as well as several standalone thrillers. Recently, the accomplished author took time to answer some of CrimeHQ's questions about his latest Andy Carpenter mystery, Collared, the difference between writing movies and novels, and his Tara Foundation.

What can readers expect from Collared that they haven’t experienced in previous Andy Carpenter novels?

They can expect a significant piece of literature that will reshape their view of the world and influence and educate millions. Of course, if they do expect that, they’ll be disappointed. Hopefully, it’s a good mystery with suspense and a lot of humor.

Are there any TV shows you're currently watching?

I watch sports, news, and Seinfeld re-runs. I’m an intellectual.

After writing films, what challenges stand out to you with writing a novel?

I can’t think of any. For me, writing a novel is infinitely easier and more satisfying. The need to tell a good story and entertain exists in both mediums, but novel writing is much freer and less restrictive. 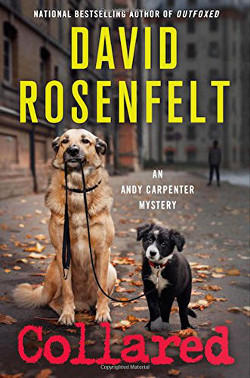 That they enjoyed it and are looking forward to the next one.

I’m not. I’m writing the next book, and I can’t read while I write. If I do, I tend to imitate the style of the author I’m reading (which is probably a good thing).

If you could team Andy Carpenter up with any other detective, who would you choose?

What's your favorite line from Collared and why?

I don’t think I have one, but I can tell you my favorite line from any of the Andy Carpenters. It’s the opening line in Dead Center. Andy’s girlfriend Laurie left him five months earlier to go back to her hometown, so he hasn’t dated in all that time. He asks the question, “Do you get spiritual credit for celibacy if it’s involuntary?”

Which mystery/crime series has had the biggest influence on your work?

The Tara Foundation, named in honor of your Golden Retriever, is a huge aspect of the series and your own life. What made you decide to incorporate the real life foundation into your series?

I include it for two reasons. One is to hopefully help people understand how great animal rescue can be. The other is because they tell you to write what you know and understand (which is why there are so few women in my books).

Comment below for a chance to win a paperback copy of Collared by David Rosenfelt!

Collared Comment Sweepstakes: NO PURCHASE NECESSARY TO ENTER OR WIN.  A purchase does not improve your chances of winning.  Sweepstakes open to legal residents of 50 United States, D.C., and Canada (excluding Quebec), who are 18 years or older as of the date of entry.  To enter, complete the “Post a Comment” entry at https://www.criminalelement.com/blogs/2017/07/qa-with-david-rosefelt-author-of-collared-comment-sweepstakes beginning at 3:00 p.m. Eastern Time (ET) July 13, 2017. Sweepstakes ends 2:59 p.m. ET July 25, 2017. Void outside the United States and Canada and where prohibited by law. Please see full details and official rules here. Sponsor: Macmillan, 175 Fifth Ave., New York, NY 10010.

David Rosenfelt is the Edgar-nominated and Shamus Award-winning author of several standalone thrillers and more than a dozen Andy Carpenter novels, including Collared. He and his wife live in Maine with their ever-changing pack of rescue dogs.