Q&A with Chris Offutt, Author of The Killing Hills

June 14, 2021
Read on for J.B. Stevens's interview with Chris Offutt, author of The Killing Hills, and learn more about Chris and his writing process. 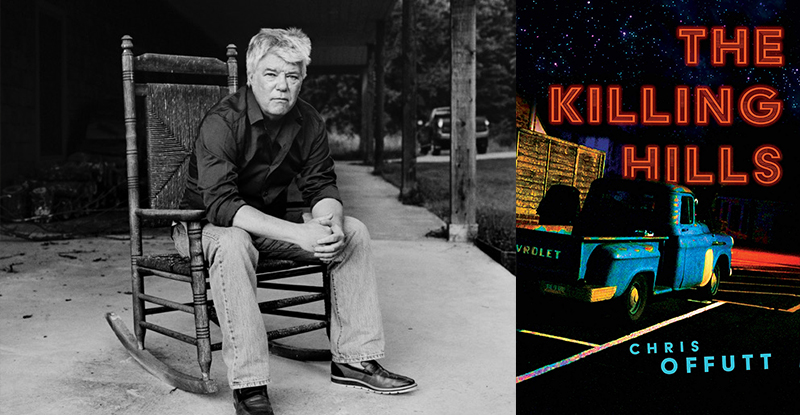 I recently had the good fortune to do a short question and answer with Chris Offutt. Chris is a widely accomplished author across numerous formats—TV, comics, memoir, and fiction. He is a highly-skilled writer, and someone I personally look up to. As a fan, I was delighted to speak with him. His new novel The Killing Hills comes out on June 15th from Grove Press. Below is our correspondence.

For readers unfamiliar, can you talk a bit about yourself?

I grew up on a dirt road in Haldeman, KY, population 200. It was a former mining town in the middle of the Daniel Boone National Forest. Every day I walked a path through the woods to my elementary school at the bottom of the hill. For high school, I walked the same path and caught a bus to town. I went to the nearest university, Morehead State, about ten miles away, and studied Theatre and Visual Art.

After college, I began writing prose. I traveled the U.S.A, mainly hitchhiking, and working labor jobs. My first story was accepted when I was thirty-one. In my late forties, I began working in Hollywood to finance my son’s college education. The Killing Hills is my eighth book.

Over the years I’ve lived in 12 states and several cities. I now live at the dead end of a gravel road in Lafayette County, Mississippi, near Oxford.

Tell us about your soon-to-be-released novel The Killing Hills.

I always wanted to write crime novels, having loved them as a kid— reading Nancy Drew, the Hardy Boys, and Sherlock Holmes.  I wrote two that are unpublished—they just weren’t good enough—but I learned a lot from the effort. The Killing Hills is my first crime novel set in the hills of eastern Kentucky. I loved writing it so much that I wrote a sequel. I’m now working on a third one.

If somebody got killed where I grew up, half the county knew who did it and why. The other half had strong suspicions. This made finding the culprit relatively easy for law enforcement. For the novel, I wanted to see what it was like for a sheriff to have a murder case that was not so obvious. In essence, the first homicide by an unknown party in county history.

What type of research did you do for this novel?

Very little. The book takes place where I grew up. All my fiction is set in the same four square miles, or about people from there. Setting a book during contemporary times, in a place I know intimately, reduced the amount of research. My reference books are mostly field guides to birds, trees, and wildflowers, and a few books about weapons.

If you had to pick one author to co-write a novel with who would it be… and why?

If I love a writer’s work, the last thing I’d want to do is co-write. It would dilute the strength of that writer’s prose and specific vision. I couldn’t forgive myself for doing that to a favorite writer.

Are you a full-time author, or do you have a “day” job?

I teach screenwriting and film classes to undergraduates at the University of Mississippi. Once every three years, I teach a graduate fiction course. I’ve never been able to get by on writing alone.

I’ve been a dishwasher, waiter, truck driver, landscaper, housepainter, garbage man, furniture mover, curb painter, and warehouse worker. I worked in various stores including men’s clothing, secondhand items, tourist art, and as a florist. I also worked as a family photographer in New England and as a tour guide on a boat in Florida. Most recently I worked as a screenwriter for True Blood, Weeds, and Treme. When I learned that there’s more money in TV pilots, I wrote four.

All in all, I’d rather be a dishwasher. Much better job than any of the above—no pressure and you get a free meal.

Looking at your website, I read about your theater past. What was your favorite part to play (before you lost the acting bug)?

I loved the plays of Eugene O’Neill and always auditioned for them. Later, I discovered Sam Shepard. He wrote great plays. I heard him say that he wrote parts that he’d like to play himself. I borrowed that advice and applied it to my own work—I write novels I’d like to read.

I have the “collecting bug” but could never afford to buy anything. My holdings consist of objects I found in the woods—turtle shells, bird nests, antlers, feathers, animal skulls, cool sticks, and hundreds of lucky rocks. I love photography and post on Instagram. I have all my scalp hair and wisdom teeth.

Lastly, I don’t know when or if I ever said this, but my daily goal is to write one minute per day. It reduces pressure and anxiety tremendously. Also, I always achieve my goal.

Mr. Offutt is a great writer, and it was my pleasure to speak with him. If you’d like to experience Chris’s prose, and you live in the Southeastern United States, he is doing a live fiction reading at Noir at the Bar on June 26th, 2021. The event takes place at the Wild Roast Café in Hoover, Alabama at 7pm (I’ll be reading as well). Also, buy his new book.