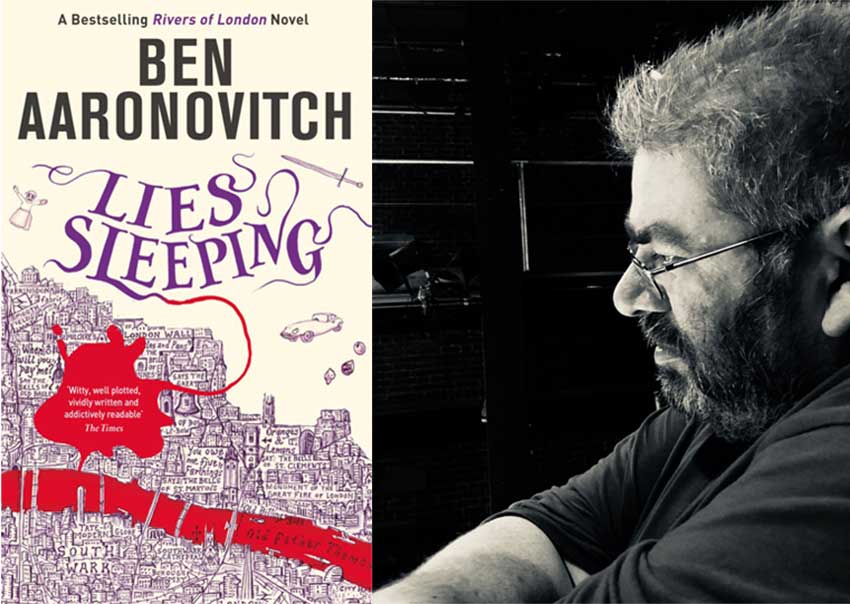 Ben Aaronovitch is a HUGO Award-nominated author. He began his career as a screenwriter and contributed to the original two seasons of the television show, Doctor Who, among others. Aaronovitch later became a bookseller before returning to writing with his Sunday Times bestselling Rivers of London series of contemporary urban fantasy/crime fiction novels. He was born and raised in London, and his love for the city is reflected throughout the books. Lies Sleeping (available November 20, 2019) is the seventh novel in the Rivers of London saga, which has sold more than a million copies.

Recently, the author generously reflected on topics including balancing backstory, the intersection of plot points, negotiating with characters, the importance of setting, and the transferable skills between scriptwriting and novel development.

Lies Sleeping is the seventh book in your Rivers of London series. How do you endeavour to keep things fresh, both for yourself and for your readers? Also, what’s the key to balancing backstory with forward momentum?

I love the way you assume such a high degree of conscious control over my writing – it’s very flattering. First off, I try not to repeat myself too much from one book to the next. I try to ensure that aspects of the premise, setting, and story are unique to that particular book. This ranges from the very obvious move to the countryside in Foxglove Summer to the shift in tone between Rivers of London and Moon Over Soho. Secondly, I try to add variety to both the detail about such mundane things as policing or architecture and to the legendarium surrounding the magic in the series.

The balancing act is trickier, and like all balancing acts, it’s much easier to do if you don’t think about it too much.

Detective Constable Peter Grant is on the trail of The Faceless Man Killer – a case that melds past and present events. What compelled you to write about the intersection of occurrences – and what was your plotting process like to account for this?

Right from the start, the Rivers of London series has been about the liminal area where things intersect. Peter’s working class background intersecting with Nightingale’s posh one, old meets new, science meets magic, procedure meets wild caprice. A world city that is also a national capital, outward vs inward, the future vs the past. I try to thread my plots through this closely woven fabric so that it leaves as few holes as possible – I don’t always succeed.

Things are further complicated by the fact that Peter must reunite with his friend-turned-foe, Lesley May, to save the city. In what ways does their personal dynamic allow for heightened suspense and emotional resonance – and how does this lend itself to an organic sense of character development?

I like to say that I don’t so much direct my characters as negotiate with them about what they do next. Many people point out that all a writer’s characters spring from a single mind and therefore, by definition, have no will of their own. To think this is to be completely right and to be entirely missing the point. I take my characters and I look at the situation they’re in and I ask myself, not what does the plot need them to do next, but what would they as people do next. Sometimes the plot has to change or you need to give your character a good reason to do something – even if this is never explicitly detailed in the story.

With Lesley and Peter, you have an opposition of both philosophy and life experience, and against that, ties that go back years and a shared – I don’t want to say admiration but I can’t think of a better word – a shared admiration that is often unvoiced. Both of them are desperate to prove to the other that their choices are valid and that is what drives their relationship.

These books play out against the backdrop of London. In your opinion, how does setting enhance story – and in what ways does grounding the series in real-world locales offset the elements of fantasy?

For me, setting is very important. I’m the kind of reader who is deeply disappointed if a fantasy novel doesn’t have a map included. But setting is very story-dependent – some stories rely on a very ambiguous setting, especially if they’re aiming to create a fey or dreamlike tone. Others rely on a very solid thought-out background, whether imaginary, like the City in the 87th Precinct novels by Ed McBain, or real as in the London of Rivers of London.

Setting is like plot and character: something that as a writer you need to keep an eye on but that shouldn’t intrude upon the reader’s consciousness (unless they’re deconstructing for lulz or academic credits). There has been a tendency in mainstream fiction to equate minimalism in setting as an automatically good thing but this assumes that your audience shares a particular cultural background with the author. This is a mistake.

In the case of my books, the realer I can make the setting – including the police work, the streets, and the everyday lives of my characters – the easier it is to sell the magic. But also the more realistic the setting, the more fun the clash with the imaginary elements is.

You began your career as a screenwriter. What of that discipline is transferable to writing novels, both in terms of style and structure? Conversely, what liberties do books allow for that scripts don’t?

The main skill that transfers from scriptwriting is that of an understanding of structure. Scriptwriting is a very visceral media that depends on its structure to ensure a constant tension between expectation and fulfilment. These skills transfer very nicely to novels although sometimes you deliberately break the pattern to keep things fresh.

Prose does two things that scripts can’t – instant interiosity and effortless elision. One is the ability to instantly portray a character’s thoughts or feelings without any mediating technique. You can just write – ‘He was so angry he was struck dumb.’ Even the best actor will need at least 10-15 seconds to portray that reaction but in prose – 2 seconds tops.

The other is, instantly skip boring events at any point within a scene without cutting away or breaking the reader’s immersion. For example:

Daniel opened the door. “Hi,” I said and after the usual exchange of pleasantries he invited me in for coffee. “You’ll be here about the MacGuffin then,” he said. I said I was and explained to him about the professor. “Gosh that was a long tale,” he said.

Coming up in Lies Sleeping?

In his darkest hour Peter will make a new friend and as a result, somebody he knows will no longer feel quite so alone.

Or beyond Lies Sleeping?

Peter takes on some unexpected new responsibilities, and we move into the strange world of the Silicon Roundabout.