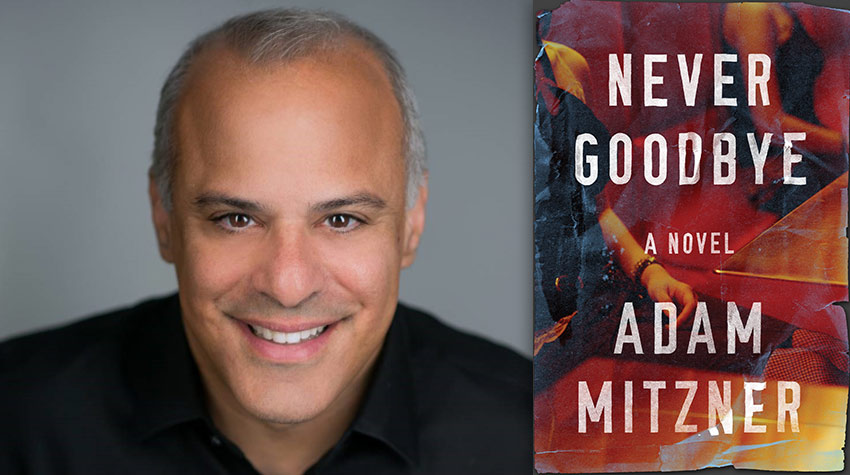 Adam Mitzner is a practicing attorney in a Manhattan law firm and the author of several critically acclaimed novels. These include A Conflict of Interest, A Case of Redemption, Losing Faith, and The Girl from Home. Suspense Magazine named A Conflict of Interest one of its best books of 2012; in 2014, the American Bar Association nominated A Case of Redemption for a Silver Gavel Award. Mitzner’s newest, Never Goodbye, is a sequel to last year’s #1 Kindle bestseller, Dead Certain.

The author recently acceded to a direct examination that covered topics including the challenges of writing a continuation story, the significance of title, the evolution of character, the use of alternating perspectives, and the balancing act between technical accuracy with narrative urgency. He also teased his next book, which marks a departure from his most recent forays into fiction.

Never Goodbye is the first sequel you’ve written. What are the unique challenges of crafting a continuation story, and conversely, what did you find most appealing about revisiting characters from Dead Certain?

Doing a sequel is different, that’s for sure. For starters, you don’t have that whole getting to know you thing at the beginning of the book, which is one of my favorite parts of the writing process. In the way it’s exciting to meet new people in real life, writing characters from scratch has that same thrill. But, to continue to borrow from real life, a sequel is like getting to know someone you already know that much better, so that was exciting too. And in Never Goodbye, I have the best of both worlds. Half of the book is a deeper dive into Ella Broden, the protagonist from Dead Certain, but the other half of the book concerns Dana Goodwin, who is a new character.

Tell us about the significance of the title, which resonates on multiple levels. Also, at what point in the creative process did it emerge?

It is a running joke in my family that none of my books are ever published under the titles I selected. As a result, my wife and kids still often refer to the books by my title, because when we’re talking about the books, that’s the title we use, and once the book is published under a different title, we’re on to talking about the book I’m working on then. That string was broken with Dead Certain, which was the title I had upon submission. But Never Goodbye was the first book in which I had the title even before I started writing the book. To me, it perfectly captured that feeling of losing someone and yet still having them be such a big part of your life. The title serves the double-duty of also being the title of a song Ella writes and performs. I actually went so far as to write lyrics for that song and shared them with my daughters, who are both singer/writer types. My youngest said, “It’s good. It’s like a really smart 7th grader wrote it.” That was enough “praise” for me to decide not to include the lyrics in the book. 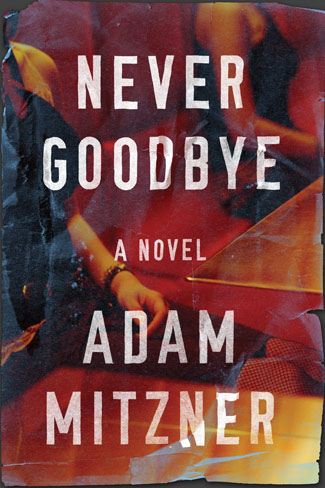 Here, we find Ella Broden living in the aftermath of her sister’s murder. In what ways does grief inform who she is and the decisions she makes, and how does her alter-ego, singer Cassidy, serve as a counterbalance?

I think that any traumatic event shapes who we are and the decisions we make after that, and so Ella is no different. What I found so fascinating about her is that she suffered two truly traumatic experiences: the death of her mother when she was in college and the murder of her sister in Dead Certain. Each impacted her greatly but in totally different ways. Her mother’s death caused her to put aside her dreams of becoming a singer and pursue the safer path of becoming a lawyer. When we meet Ella at the beginning of Dead Certain, she has created Cassidy as an alter-ego, a way to be that singer that she never became. But the use of a stage name and the fact she keeps that part of her life secret indicates that she does not view Cassidy as being a part of her. Charlotte’s murder, however, causes Ella to try to bring these two parts of herself together. That’s her journey in Never Goodbye.

The narrative unfolds through alternating perspectives: Ella’s and Deputy Chief of the Special Victims Bureau Dana Goodwin’s. How does this both heighten the suspense and allow for an organic sense of character development?

As a writing technique, I like writing in the first-person. I think it lends an intimacy to the story. (And I say this although I attended a lecture given by Jonathan Franzen, who said, in no uncertain terms, that novels should never be written in the first-person). But the limitation of the first-person narrative is that you only see the story from one point of view. By introducing Dana as a second narrator, the reader is privy to a different perspective evaluating the crime at the heart of the book and the characters. The challenge is to make Dana and Ella different people so that their differing reactions to the same situation is totally understandable given their differing perspectives.

As a practicing attorney, you are intimately familiar with the criminal justice system. How do you balance a sense of authenticity with entertainment value, and in what ways is this book’s courtroom showdown illustrative of both the inherent drama and tedium of a trial?

This continues to be one of the major challenges I put on myself—to have the legal parts be accurate even though it could be so much more exciting if I cut corners! There’s a line that airline pilots use that their job is hours of boredom punctuated by moments of terror. That’s true of trial work too. There is nothing—and I mean nothing—more exciting or anxiety producing than awaiting a verdict, and I say that as a lawyer experiencing it. I cannot even fathom what it is like for the participants. So the exciting parts don’t need amplification in fiction. On the other hand, trials are often packed with boredom. If you’ve ever watched a television trial—from the fictional Law & Order trials to the “real life” Datelines—you think you get enough to render a decision in 45 minutes. But, in reality, those trials often take months! The OJ miniseries was only 10 hours, but the trial lasted nearly a year. So in writing about a trial, I want to skip the boring parts of the trial but still give some sense to the reader that there are boring parts.

Please talk about the evolution of technological advancements and the ways these can both help and hinder an investigation. Are there real-life experiences that inspired this particular element of the plot?

I bet there’s a not a crime writer out there who doesn’t wish he or she was writing 20 or 50 or 100 years ago. The twist in Romeo and Juliet would not work today because Juliet would have texted Romeo about her plan. What that means is that you have to be particularly sensitive to current technologies. Most people appreciate how DNA works these days, but smartphones, social media, and surveillance video create far more of a record of people’s comings and goings than I think most people realize. In Never Goodbye, a key plot point turns on something as simple as cracking an iPhone. But that issue is truly at the forefront of many trials and achieved national prominence in connection with the San Bernardino terrorist who left behind an iPhone. The FBI, in that case, wanted the judge to order Apple to unlock it, and Apple claimed that it didn’t even have the technology to override the user’s password.

After two books dealing with Ella Broden, my next effort leaves that world. It’s called A Matter of Will (but see above, as that title may change before publication in 2019). The central question of the book is one that I’ve been fascinated by my entire life: How good people can allow themselves slowly to be corrupted in such a way that they don’t even realize that they’ve become bad people.

Adam Mitzner is a practicing attorney in a Manhattan law firm and the author of several acclaimed novels including the #1 Kindle bestseller Dead Certain; as well as A Conflict of Interest, A Case of Redemption, Losing Faith, and The Girl from Home. Suspense Magazine named A Conflict of Interest one of the best books of 2012; and in 2014, the American Bar Association nominated A Case of Redemption for a Silver Gavel Award. Mitzner and his family live in New York City. Visit him at www.adammitzner.com.