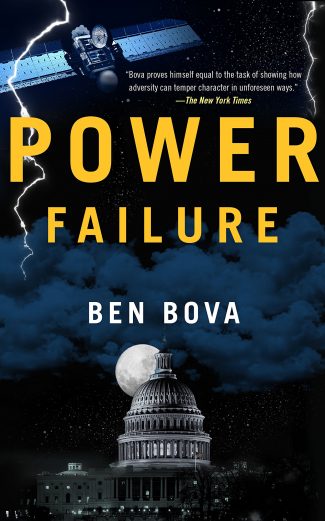 Dr. Jake Ross came to Washington to try to make a difference, but he’s learned the only way to get something done in Washington, assuming your ideals survive the corrosive atmosphere, is to gather power. Ross has gathered a great deal, riding in the wake of Frank Tomlinson. But now Tomlinson has decided to shoot for the moon. If they win, they get it all. If they lose, the game is over for Jake Ross.

Jake Ross glanced down at his wife. Tami had never seen the Tomlinson mansion before.

The black-liveried butler ushered Jake and his wife through the marble-columned entry and down the wide, thickly carpeted corridor that bisected the mansion’s ground floor. Photographic portraits and oil paintings of Tomlinson family members going back to Colonial times decorated the walls.

With a whispered, “In here, sir,” the butler opened the double doors to what ordinarily was the formal dining room. The usual furniture had been moved out. The room now held Alexander Tomlinson’s open coffin on a black-draped bier, with a small circle of stiff-backed chairs for the somberly dressed mourners.

The old man had been well past eighty, but as he lay in his coffin he looked to Jake as if he just might open his eyes, sit up, and demand to know what all the fuss was about. Tall and lean as a saber, Alexander Tomlinson had been the head of the family almost all his adult life. It was his indomitable will that had driven his son Franklin into the United States Senate.

Senator B. Franklin Tomlinson got up from his chair in the little circle of family members and greeted Jake with an extended hand and a half-whispered, “Glad you could come, Jake. And you, Tami.”

Jake nodded while Tami said softly, “We’re so sorry for your loss.”

Tomlinson was several inches taller than Jake, slim like his father from a lifetime of tennis, handball, and sailing, his ruggedly handsome face deeply tanned. His golden blond hair was thick and wavy, with just a touch of gray that made him look distinguished. He had a smile that could light up a room, but now it was dimmed, diminished.

“Dad had a full life,” he said, almost sorrowfully, “but it’s not going to be the same without him.”

Thinking of the old man’s imperious ways, Jake sympathized, “How could it be?”

Jacob Ross had been the younger Tomlinson’s science advisor since Franklin’s first run for the Senate, almost six years earlier. Jake was just short of six feet tall, solidly built, with dark unruly hair and a face that he had always thought too long and horsey. Tami, standing between the two men, was like a delicate oriental doll. A Japanese-American from California, she was wearing a sleeveless knee-length black dress with a single strand of pearls.

Tomlinson’s wife, Amy, got up from her chair to join them. She nodded to Jake and smiled at Tami. Amy was pretty, in a pert, perky cheerleader’s way. Slim figure, sparkling eyes, lovely honey-blonde shoulder-length hair. Not even her dress of mourning black could make her look somber. She and Jake had engaged in a brief, torrid affair together, during Tomlinson’s first campaign for the Senate. The affair ended when Amy told Jake she was going to marry the future senator.

Senator Tomlinson leaned closer to Tami and asked her, in a hushed voice, “Tami, do you mind if I borrow your husband for a few minutes? We’ve got some business to discuss.”

Draping an arm across Jake’s shoulders, Tomlinson led him to a door on the far side of the room. Amy gestured Tami toward the semicircle of chairs and began introducing the other family members to her.

The senator opened the door and stepped into what looked to Jake like a pantry. Rows of shelves stacked with cans and jars, a few unopened cardboard cartons on the floor.

None of the other Washington staffers had been invited to the funeral, Jake knew. But then, of course, Jake was the only person on the senator’s staff who came from Montana; the rest of the staff were all Beltway insiders. Jake was proud that the senator thought of him almost as family.

Leaning an elbow against the shelving, Tomlinson said, “It’s been a tough week.”

Jake confessed, “I never gave a thought to the idea that your father would die someday. I know he was pushing ninety, but—”

“But he was larger than life, wasn’t he?” Tomlinson said, with a sad smile.

Jake thought of the father figure in his own life, Leverett Caldwell. It was Lev who guided Jake out of the narrow gang-ridden streets of his youth and into a scholarship at the university, Lev who talked Jake into joining Tomlinson’s staff for his first run at the Senate. When Tomlinson unexpectedly won his race, Jake went with him—and his bride, Amy—to Washington.

Almost wistfully, Tomlinson asked, “Do you know what his last words to me were?”

“He was lying in the hospital bed, all sorts of tubes hooked up to him, so weak that I had to lean down and put my ear next to his mouth to hear him.”

Jake studied the expression on Tomlinson’s face. There was grief there, yes, but something more—something like pride, and determination.

“He said to me, ‘I’m only sorry that I didn’t live long enough to see you in the White House.’”

Jake tried to think of something to say.

Tomlinson went on, “He thought I could become president of the United States.”

Standing up straighter, almost squaring his shoulders as if facing an approaching enemy, Tomlinson said, “Well, I’m going to make his dream come true. I’m going to run for president next year.”

“He wants to be president,” Jake told Tami.

Tamiko Umetzu Ross had been a news reporter before she met Jake. She ran afoul of one of the most powerful senators on the Hill though, and now she worked for EcoSanity, a public relations firm that represented mostly environmental issues and the organizations that pushed them. “We’re poor but pure,” Tami often joked. Ruefully.

Jake muttered, “He hasn’t even finished his second term in the Senate and he wants to run for president.”

Tami and Jake were sitting side by side in the minuscule first-class section of the Boeing jetliner, heading back to Reagan National Airport in Washington, DC.

Alexander Tomlinson’s funeral had been small, tasteful, with only a small knot of dark-clad family members in attendance at the Unitarian Universalist Congregational Church that Senator Tomlinson’s grandfather had built, almost directly across the tree-lined avenue from the Tomlinson mansion.

“Why shouldn’t he run for president?” Tami asked. “He’d make a good candidate: handsome, rich—with his looks and your brains he could win.”

She was grinning at her husband, but Jake was not amused.

“Yeah, he’s good looking, all right,” Jake admitted, “but he’s almost totally unknown outside of Montana. And being so damned rich might work against him. Another playboy with delusions of grandeur.”

“Don’t sell him short. He’s more than that,” Tami said.

“You know that, and I know that, but the general public doesn’t know him. He doesn’t have a base of voters. The party insiders will see him as an upstart.”

Jake almost smiled. “He was a Democrat. The Republican party doesn’t take to upstarts so easily.”

“Reagan worked his way up. It wasn’t all glamour. He paid his dues before running for president.”

“Tomlinson got the energy plan through,” Tami said. Then she added, “Your energy plan.”

“Yeah, that seems to be working out okay. Even the Democrats voted for it, in the end.”

“And it’s creating jobs, bringing down people’s electricity bills, isn’t it? That’s something he can take credit for. Thanks to you.”

Jake shook his head. “I just don’t think the time is right for him to throw his hat in the ring. There are plenty of other people in line ahead of him.”

“But there’s one other factor you’re not giving enough credit to,” Tami said.

“Does he?” Jake wondered. “Or is his father still pulling his strings, from the graveyard?”

Jake and Tami lived on the top floor of a six-story-high condominium building on Connecticut Avenue, not far from Dupont Circle and the apartment Tami had shared with three other women when Jake had first met her. The two-bedroom condo was much more expensive than similar quarters in the suburbs outside DC, but Jake cherished its location, within a few minutes’ drive of the Hart Senate Office Building, where Senator Tomlinson’s office was.

Their flight from Helena arrived at Reagan National on time, and within little more than a half hour they were home.

Jake threw his worn old travel bag on the bed, and while Tami started to unpack her roll-on, he checked the phone’s answering machine.

One call. From the executive assistant of Kevin O’Donnell, the senator’s chief of staff: “A staff meeting is scheduled for tomorrow morning, Dr. Ross,” came the woman’s high, girlish voice. “Ten sharp.”

Why didn’t she call my cell phone? Jake wondered. Then he saw the time of the call on the answering machine’s tiny screen. We were in the air; no cell service. Kevin set up this staff meeting while we were flying in from Helena. Wonder what it’s all about.

Ben Bova, author of Power Surge and Power Play, is a six-time winner of the Hugo Award, a former editor of Analog, former editorial director of Omni, and a past president of both the National Space Society and the Science Fiction Writers of America. Bova is the author of more than a hundred works of science fact and fiction. He lives in Florida.