A subway train roars through the night. Sweaty and surly, the crowded passengers inside avoid eye contact. The train lurches to a stop and more people squeeze in. Two men watch a pretty young woman carrying a white purse. A third man pushes his way though the cramped New Yorkers and stands beside the woman. She makes eyes at him. He makes eyes back at her while he picks her purse. The train lurches to another stop, and he slips off. The two men rush to catch him, but the doors slam shut and the train shoots off again.

So begins Samuel Fuller’s masterpiece Pickup on South Street. The pickpocket is Skip McCoy (Richard Widmark), a three-time loser who’s only been out of the joint for a few days. If the cops catch him picking pockets again, he’s looking at a life sentence, but he has bigger problems than jail. It turns out that the wallet he lifted on the train contains some secret microfilm that was on its way to a drop off with Communist agents when Skip liberated it.

The girl carrying the film is Candy (Jean Peters), an unwitting part of this mess who thinks she’s just doing a favor for her sleazy boyfriend, Joey (Richard Kiley). With the help of a professional stoolie named Moe (the great Thelma Ritter), Candy tracks Skip down to a small shack on the docks where he spends his days swinging in a hammock and drinking beer he keeps in crate lowered into the river. She cozies up to him, bats her lashes, and offers him five hundred bucks. He plants a kiss on her, shoves her to the ground, and tells her to come up with some serious cash.

Everyone is after Skip and that microfilm. The cops come around, toss his place (but don’t think to look in the beer crate at the bottom of the river), and try fruitlessly to appeal to his sense of patriotism. “Are you waving the flag at me?” he snaps in the movie’s most famous, and most famously controversial, line of dialog.

The Commie spies behind the stolen microfilm don’t wave any flags. They dispatch Joey out to wave some cash at Skip, and when that doesn’t work he starts waving a gun. Moe, the world-weary little stool pigeon, goes down first, and then Joey presses in on Candy. After she winds up in the hospital, Skip decides to turn the tables on the Commies and repay Joey for what he’s done to Moe and Candy. 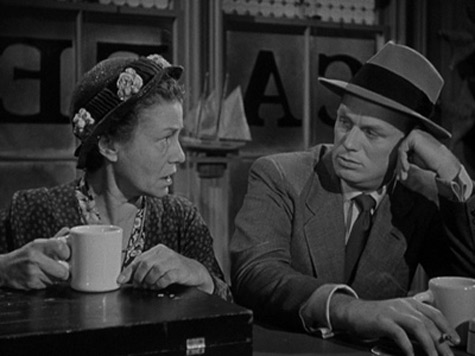 No film Fuller ever made so perfectly demonstrated his relentless style. His camera rarely stops. It moves around rooms, gets in close on faces, maybe lingering on a kiss or a pair of eyes consumed in thought before swinging away again to follow someone else. The sheer number of his close ups is a violation of the classical style of the time—directors like Hawks and Ford eschewed the close-up as the device of a lazy storyteller—but Fuller thought differently. He’d come of age in the newspaper business and respected headlines that blazed off the page in extra large type.

His style was earthy but not realistic, gritty but also beautiful. In so many words, it was film noir. His not-to-be-missed films include Phil Karlson’s Scandal Sheet (based on the novel, The Dark Page by Samuel Fuller), Underworld USA, The Naked Kiss, and Shock Corridor. Like Orson Welles, Fuller was an unruly talent who couldn’t fit into the studio system and had to work on low budget productions in less than ideal circumstances. Pickup on South Street is the crown jewel of his studio films, the perfect demonstration of what he was capable of when he had the tools of the system to work with.

For instance, Skip’s little shack down by the river is one of the great iconic locations in a film noir. It’s a barren little hovel and evinces no interest by its owner in anything outside of the contemplation of criminal enterprise. Skip steals, hides his loot, has a beer, takes a nap, and then heads out into the sweaty subways to steal again. The place itself, a studio set, is the perfect expression of the character. Fuller’s cinematographer on the film, the talented veteran Joe MacDonald, had already lensed noirs like Panic in the Streets, but here he outdid himself. Pickup on South Street stews its characters in a world of stark black and white images. This is picture-making of the highest order. Fuller got into trouble with the picture because it was deemed by some (meaning J. Edgar Hoover) as un-American—or, at the very least, not American enough, which amounted to the same thing in 1953. This charge is somewhat overstated, however. While it is true that Widmark and Peters play social outcasts, the film’s portrayal of the Commie bad guys is as absolute as the Commies in something like The Woman on Pier 13. The film, then, is something of a redbaiter but rises above most anti-Communist films by refusing to “wave the flag.” The main difference between Pickup and a film like I Was a Communist for the FBI, besides quality, is the mercenary nature of the hero. Skip McCoy doesn’t like Reds because he senses they’re not good people to do business with.

The success of Fuller’s gambit to place a mercenary at the center of an espionage plot requires deft acting by the leads. Richard Widmark was the exact right man for the job. He was in a close competition with Kirk Douglas and Dan Duryea to see who could be the biggest son of a bitch in noir (Douglas won, but it was tight), yet Widmark was also compelling as a leading man. There was something misanthropic about him that could express itself as psychosis in a movie like Kiss of Death but could also translate to a lead role like this one. Widmark plays Skip as a man who’s a crook because the rest of the world is full of suckers. Why shouldn’t he be a crook?

He’s matched perfectly with Jean Peters as Candy. In some ways, Candy is more the protagonist than Skip because we care more about her than we care about him. Peters has the perfect face for this role, too. She’s pretty, but not too pretty. There’s a certain roughness to Candy. In the opening scene on the train, she looks sweaty and almost pimply. If we can’t quite believe that she would fall for Skip so fast—he’s a complete bastard to her from the moment they meet—she’s able to pull us along and make us think, “Well, maybe Candy just has rotten taste in men.” She certainly messed up by getting involved with Joey. A later scene finds her in a life and death struggle with her hoodlum ex-boyfriend, and it’s still a shocking piece of violence. Peters delivers a superb performance throughout the film, and her final line of the film is a keeper.

Finally, one must draw attention to the exquisite performance by Thelma Ritter as Moe. Ritter was one of those character actors who lifted the level of every film in which she appeared, but she did her best work here as the fatalistic little stool pigeon trying to save up enough money for a decent grave. Ritter plays the role with such street-level integrity that she steals every scene she’s in, not an easy feat for a film made up entirely of great scenes.