Once upon a time there was a group of UK writers known as The Piccadilly Cowboys.  They were Terry Harknett, Angus Wells, Kenneth Bulmer, Mike Linaker, Laurence James, Fred Nolan, and John Harvey. Among them, they wrote nearly 300 western novels and a lot of other things. Bulmer, for example, wrote well over 150 novels, most of them in the SF field, and might be best known for his Dray Prescott series written as Alan Burt Akers.  John Harvey wrote around 50 westerns under various pen names before beginning his career as an award-winning author of crime fiction with the Charlie Resnick and Frank Elder series.  Laurence James wrote more than 40 of the popular post-apocalyptic Deathlands series as James Axler.  Mike Linaker is known now as an writer of action-adventure novels in the Mack Bolan series.

But they were all Cowboys, a group that even now has a web forum dedicated to the discussion of their works.

As important as the group as a whole was, the writer I want to talk about here is Terry Harknett, who—as George G. Gilman—had the greatest success of them all as a writer of westerns, thanks to his series about a man named Josiah Hedges, better known as Edge.

In the first book of the series, Edge, the son of a Swedish father and a Mexican mother, returns home from the Civil War only to find his family murdered.  He sets out to get revenge on their killers, and he succeeds soon enough, though his adventures aren’t nearly over.  They continue in print through sixty-one books, and others have lately appeared in e-book format. To say the Edge series was popular is understating the case.  It began in the early ‘70s and continued throughout the 1980s.  All the early titles were reprinted many times, and the books are still popular today among collectors.  The final one, The Rifle, is the hardest to find, and it’s currently being offered by Internet booksellers starting at $350.

What made the series so popular?  The stories were well-told, short, and easy to read.  They played off the mythical west as seen in the spaghetti westerns big at the time, and that had a part as well.  They’re about as far from politically correct as you can get, which must have held a certain appeal.  And Edge is a fascinating character, powerfully devoted to his own survival.  He doesn’t care who dies, as long as it’s not him, and he’ll do what he has to do to stay alive.  He doesn’t draw the line at anything.  If he has to kill a someone to insure that he lives, he doesn’t hesitate.  If someone else is involved in a fight for his life, Edge isn’t going to be the one to step in and help.  It’s a matter of indifference to him if someone else lives or dies.

And maybe that’s the key to the series.  Like Edge himself, it doesn’t draw the line at anything.  The U. S. publisher (Pinnacle) advertised it as “the most violent western series in print,” and it delivers on that promise.  The violence is vivid, plentiful, and terrible.  It’s frequent and intense, and it’s beyond just about anything currently in print.  It’s visited upon men, women, children, and animals alike.  Disembowelings, decapitations, and dismemberments abound.  Rape and disfiguring wounds are common.  Any character can die at any time (excepting Edge, of course) and usually does.  Edge, however, takes it all in stride, often with a wry, anachronistic aside. Here’s the blurb from the back of Edge #2: Ten Grand: “Most of the heroic figures in the stories of our early days as a nation were known for their ideals and sense of honor.  Not Edge.  Most heroes give their enmey a sporting chance.  Not Edge.  Respectful to ladies?  Kind to animals?  Clean living?  Definitely not Edge.”

Heroic figure?  Edge is no hero.  He’s the embodiment of an anti-hero, as cold as they come.

I can’t say that the violence in the Edge books was unequaled. In the ‘70s and ‘80s, the men’s adventure field had many books that came close. Some (the Phoenix series, the TNT series) might have surpassed it, but it was unusual in a western. There were undoubtedly crossover readers who read the men’s adventure books and the violent westerns as well, but that audience has moved on. Sometimes I wonder what it’s reading now.

Bill Crider is a Texas writer, author of the Sheriff Dan Rhodes series, fan of the Kingston Trio, and a collector of baseball cards. 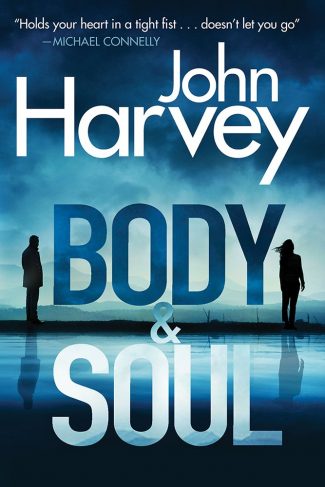 Body & Soul by John Harvey is the 4th mystery featuring ex-D.I. turned Private Eye Frank Elder. Shame on me for not getting to this series sooner. Body and Soul is John Harvey’s fourth and final book to feature ex-D.I. Frank Elder, and gosh it’s great. At the open, Frank is spending his time puttering around…