Perhaps you know the sensation: that an inanimate object has somehow found you. That perfect-fitting, too soft-to-be-true t-shirt that was shoved on a sale rack with your favorite line from Star Wars or The Godfather or whatever you want emblazoned on the front. Or the gnome statue at a garage sale that looks remarkably like your aunt Alice—complete with a mole—and it becomes the best gift ever for your brother at Christmas. You get it.

That’s how Peter’s Pence by Jon Cleary came to me. I was assigned to review the 1975 Edgar Award winner not knowing much about the plot, only that thieves were set to steal the Vatican’s treasures. Being a Catholic convert, I thought, why not? It would be fun to talk about the book to the arched eyebrows of the nuns at my daughters’ school.

See Our Revisiting the Edgar’s Series!

But then the main character, McBride (referred to by his last name throughout the book which is as 1975-cool as it gets—Columbo, anyone?) is a weary recovering journalist handling press matters for the Vatican. Guess who is also a weary (not recovering) journalist? Our hero is someone I immediately picture walking around the newsroom where I work complete with khaki pants and a wrinkled button-down shirt.

This is when Jon Cleary begins to show his brilliance because our hero isn’t a hero, he’s secretly part of a troupe of thieves that have concocted a scheme to steal the soon-to-be traveling artifacts of the Vatican. Turns out McBride is carrying some family guilt about servitude towards the Irish Republican Army, and figures getting some serious cash from these treasures could do some good for a cause that he’s not even sure he truly believes in. 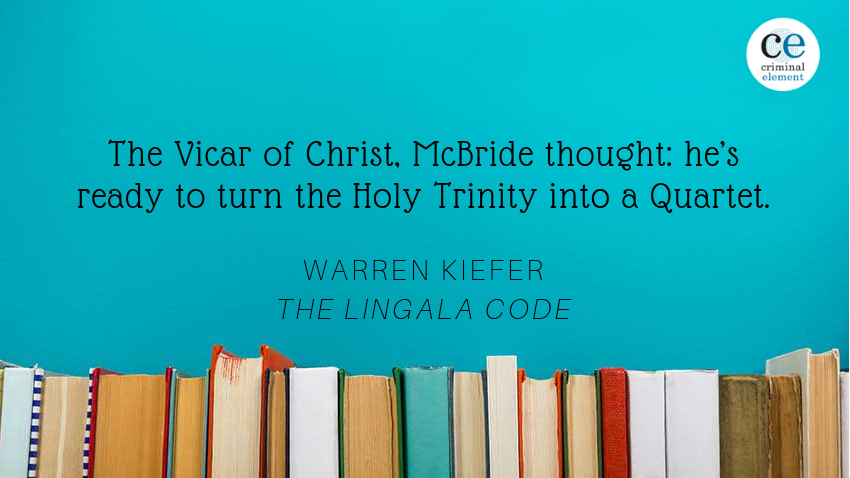 Like all good thrillers, things go badly for McBride and his gang (the actual noun used in the book jacket flap—man, 1975 was a phenomenal year) which is made up of guys including Toohey, which is the most IRA gang name of all time. And like in all good thrillers, things go from bad to worse, and they end up with no physical treasures, only a spiritual one: the Pope himself.

McBride is pretty conflicted, given that he actually likes the leader of the Catholic Church. It doesn’t help that McBride’s girlfriend Luciana (who refers to him as “Darling,” which I pointed out to my wife just to see her eyes roll) is heavily conflicted and displeased that they’re stashing the Pope in her family’s estate owned by her father (Count Percoli! 1975!) awaiting a massive ransom.

What follows is not only a genuinely smart but also wickedly clever thriller. I actually earmarked passages from page one that were so brilliantly crafted that I want to go back and re-read them. In referring to the Pope, he writes, “He held the chalice aloft, nothing of humility in his action, the leading actor in his own drama. The Vicar of Christ, McBride thought: he’s ready to turn the Holy Trinity into a Quartet.”

Take a bow, Mr. Cleary. You deserved that Edgar win.

Join us again next Friday when Scott Adlerberg reviews 1976’s Best Novel, Hopscotch by Brian Garfield. See you then!

Jeremy Finley is the chief investigative reporter for WSMV-TV, the NBC-affiliated station in Nashville. Jeremy Finley’s investigative reporting has resulted in some of the highest honors in journalism, including more than a dozen Emmys, Edward R. Murrow awards, and a national certificate from Investigative Reporters and Editors. He lives with his wife and daughters in Nashville, TN. The Darkest Time of Night is his first novel.