Peruvian mummies refuse to play dead. In fact, despite their now empty craniums and lifeblood that has long drained from their bodies, their hushed demands or whispers of love can still be heard by those who carry within them the mummies’ inherited DNA. But it is only a handful of their descendants who still honor the mummies’ enigmatic cries. Ages ago, the advice of Incan leader Manco Capac rang in all ears of the empire like a clap of thunder; even coming from a mummified sovereign, his powerful words rang true. Now the majority of the mummies’ descendants prefer to listen only to scientific and anthropological explanations for how and why the mummies continue to be rediscovered in glacial crevasses, musty caves, and cloud-swept volcanoes. Contemporary society listens only to scientific and anthropologic data pertaining to newfound mummies. We are intrigued to hear that the Ice Maiden’s stomach still contains the frozen food she ate and that she died of a blunt trauma blow. We listen to reports that tell us X-rays confirm the Chachapoya mummies of the Peruvian cloud forest had their internal organs removed, and we wait to hear about the methods used to preserve their skin. Although the scientific language of logic and reason has practically duct-taped the mummies’ own communication in the twenty-first century, the mummies’ visceral messages continue to hum in the bone marrow of a few of their descendants like a huayruru rattle shaking on a foggy night in the cloud forest or a lone pan-pipe tune ascending the frigid Andean peaks.

Every couple of years, the mummies’ faint echoes can still be heard as they resurface from their centuries-old slumber to remind their descendants that the venerable Incan ways must live on, that the tradition of paying respect to one’s ancestors demands adherence, that one must toe the line or face the consequences––no matter the time span. Since 5000 B.C., long before the Egyptian civilization mummified its rulers, Peruvian mummies have existed and lived side-by-side with those whose pulsating hearts and processing gray matter still flowed with energy, admiration, and loyalty for their mummified ancestors. It was this love and these fervent beliefs that kept the mummies alive in the collective memory of their descendants. In this exchange of love, respect, and energy, the living continued to hear the wisdom of their deceased elders––even if the mummies’ vocal cords no longer emitted any sound waves. In the old days, before the Spanish raised havoc and tried to decimate the Incan civilization, the ancestral mummies––the mallquis––lived in glorious luxury in their own sumptuous palaces, dressed in gold, silver, and emeralds. Their attendants could still hear the mallquis’  commands and maintained them in the manner they were accustomed to when their hearts still pumped blood. The mallquis’ purple potatoes continued to be harvested, the black llamas sacrificed, and the holy huacas honored. They were paraded with pomp and circumstance during the important festivals, and although unspun cotton filled their cheeks, nostrils, and throats, themallquis’ sheer presence spoke volumes to the people.

The Spanish conquistadores did not hear a single word from the mummies, nor did they want to hear anything other than the tortured voices of their indigenous prisoners telling them where the gold, silver, and emeralds were hidden. Two steps behind the conquistadores stood the Catholic monks, hell-bent on demolishing the mallquis and anything else held sacred by the Inca. The monks wanted to extirpate the idols––the demons, as they called them. And, after they removed any valuables from the mummy bundles, only the cries of the mummies’ attendants and the centuries-old mummy ashes filled the air of the Spanish bonfires. By the time American explorer Hiram Bingham arrived in Peru in 1910, the Incan shamans had escaped to the deepest cloud forest and into the most precipitous frozen peaks to hide the remaining mallquis. But money talks louder than any word, and some of the remaining mummies soon were escorted out of their hidden caves and onto a ship headed for the Ivy League and other East Coast institutions. The mummy bundles that had previously been cherished and loved by their attendants now were lying in the cold storage rooms of the American institutions, waiting to be prodded, inspected, X-rayed, and carbon-dated. For almost one hundred years they were disrobed of their finest vicuña textiles wraps, their skin, hair, and teeth examined to confirm, refute or speculate on this or that theory.

Then, in the 1990s, a new cry was heard from the highest peaks of the Andes Mountains: a frozen ice maiden had been uncovered—a mummy so perfectly preserved that the downy hair on her arms could still be detected, and a heart full of frozen blood waited to give further clues about diseases and viruses. Her physical perfection had earned her the privilege of being sacrificed in the capacocha ritual manner. A few years later, the ever-present scavengers and thieves, thehuaqueros, found dozens of Chachapoya mummies hidden for centuries in the cliff-side caves of the cloud forest. The only thing they heard was the potential exchange of money for their black-market commerce in mummies. This is the lot of Peruvian mummies: scientists hear only the siren song of logical explanation, and anthropologists seek to find gems of previously unexplained artifacts, but only a select few hear the mummies’ pearls of wisdom.

To enter for a chance to win a hardcover copy of Missing in Machu Picchu by Cecilia Velástegui, make sure you’re logged in as a registered member of the site, and then simply leave a comment below.

NO PURCHASE NECESSARY TO ENTER OR WIN. A purchase does not improve your chances of winning. Sweepstakes open to legal residents of fifty (50) United States and the District of Columbia, who are 18 or older. To enter, fill out entry at https://www.criminalelement.com/blogs/2013/06/peruvian-mummies-still-talk-archaeology-inca-andes-grave-robbing-cecilia-velastegui beginning at 8:30 p.m. Eastern Time (ET) June 14, 2013. Sweepstakes ends at 8:29 p.m. ET on June 21, 2013 (the “Promotion Period”). Void outside of the 50 US and DC and where prohibited by law. Please see full details and official rules at https://www.criminalelement.com/page/official-rules-peruvian-mummies-comment-sweepstakes. Sponsor: Macmillan, 175 Fifth Ave., New York, NY 10010

Cecilia Velástegui is an international Latino Award-winning novelist of psychological thrillers with historical intrigue. Since her childhood high in the Andes, she's traveled to over 50 countries and now speaks four languages. She currently lives in California, at sea level, with two friendly alpacas. Her lastest novel is Missing in Machu Picchu, published by Libros Publishing on June 4th, 2013. 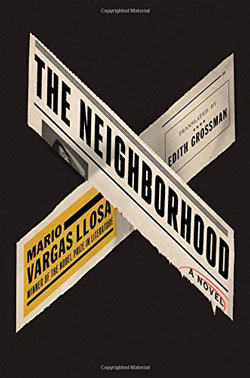 The Neighborhood by Mario Vargas Llosa (translated by Edith Grossman) is a politically charged detective novel and a thrilling tale of desire and Peruvian corruption that swirls around a scandalous exposé that leads to murder (available February 27, 2018). In the 1990s, during the turbulent and deeply corrupt years of Alberto Fujimori’s presidency, two wealthy… Buddy Cops with an Undead Twist

Among police and detective stories, we've come to expect certain tropes: the Amateur Detective, the Genius Detective, the Good Cop Who Breaks All the Rules, The Supernatural Cop, and dare I say, the Vampire Detective. While Graveyard Shift's characters share many traits with the last, the one that stands out for me is the Buddy… Which Halloween Movie Monster Is the Scariest?

October is a month that we celebrate with spooks and specters, frights and fears. As the dogs days of summer turn into the cool chill of fall, we embrace the darkness (literally if you still live in a region that recognizes the time change) of the season fully by subjecting ourselves to monster movies and…