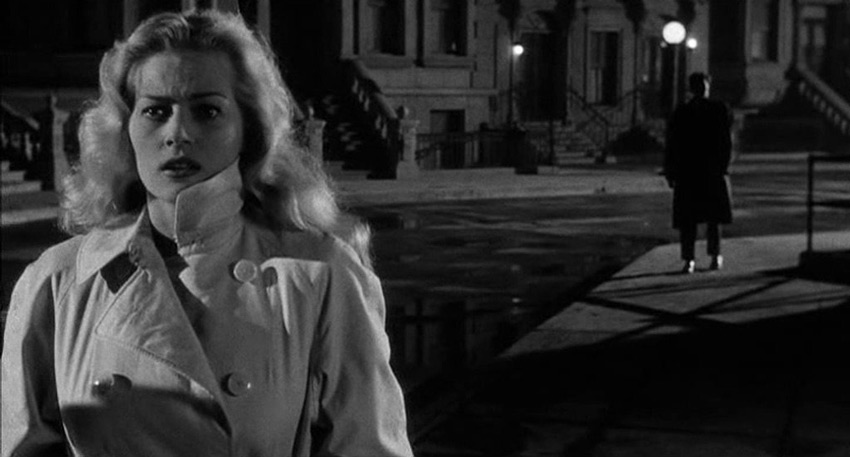 In 2014, I wrote an appreciation of Dario Argento’s 1970 giallo film, The Bird with the Crystal Plumage. In that post, I mentioned that while many have always considered it a given that the Italian director’s superb debut is based on The Screaming Mimi—a 1949 American crime novel by Fredric Brown—Argento didn’t credit the book as such at the time. I’ve read that Argento eventually came around and confessed that his movie owes a debt to Brown’s novel. Truth be told, though, the film’s story is far from a straightforward adaptation of the book’s plot. In any case, regardless of what anyone thinks about the connection between that feature film and Brown’s novel, there is no such controversy when it comes to the 1958 movie that shares the book’s title. Let’s look inside that film a little, in relation to Brown’s literary effort.

The Screaming Mimi was the fifth in a long run of crime novels penned by Brown (1906-72), who also wrote sci-fi books and a ton of short stories. If you don’t know his mystery stories and are interested, I suggest you begin with his first such book, the Edgar Award-winning The Fabulous Clipjoint (1947). But it wouldn’t hurt to get introduced to Brown’s work in this vein via the novel under discussion here.

Set in Chicago, The Screaming Mimi concerns a string of slashing murders of pretty, young women. Three such victims are viciously slain over a relatively short span of time, and the police believe that at least two of the killings were done by the same serial slasher, who is being called “The Ripper” in the papers and around town. When another attractive lady—an exotic dancer named Yolanda—survives what appears to be an attack by The Ripper (who got away before being seen by any passersby), a newspaper reporter happens onto the aftermath of the scene and gets especially interested in the situation.

The journalist is a guy named Sweeney—an alcoholic who’s just been on a two-week bender that nearly turned him into an unemployed street bum. Sweeney becomes fascinated by the alluring Yolanda and sets into investigating the Ripper slashings. If he can do what the police haven’t yet accomplished and figure out the identity of the mysterious assailant, he will not only rid the city of a brutal and unpredictable killer, but he might just endear himself to the gorgeous and intriguing dancer. If you want to find out what Sweeney learns as he looks into the connections between the three murders and the attempted slaying of Yolanda … well, read the book. The novel’s title refers to a statuette of a horrified woman who appears to be protecting herself from an attacking intruder, which comes into play.

Brown’s novel is a compelling and suspenseful read with several memorable characters. In it, the author—who often utilized comic wit in his fiction—works in the occasional humorous touch to offset what is a genuinely scary read. And, way back in 1949, he worked in what was a pre-postmodern effect by having his omniscient narrator sometimes step aside from the story to discuss its goings-on with the reader.

The 1958 movie version of Brown’s story was done by Gerd Oswald, whose other directorial credits include A Kiss Before Dying (1956) and Brainwashed (1960) as well as episodes of noted TV shows such as Star Trek and The Outer Limits. Oswald’s adaptation of The Screaming Mimi is mostly faithful to the source material, but the director and his screenwriter Robert Blees made some changes that created distinctions between the two versions of the tale.

One big difference is that Yolanda, who’s portrayed by Swedish sex bomb Anita Ekberg, is much more of a living presence in the movie than she is in the novel. In the book, she is a constant factor in the plot but is rarely seen and heard, whereas in the film, the photogenic Ekberg is actively on the screen for much of the time.

Sweeney is played by Philip Carey, who has a lengthy feature film CV but whom many will know primarily for his long-running role as Asa Buchanan on the TV soap opera One Life to Live. The cinematic Sweeney is a dapper guy and smooth operator who writes a newspaper column about city nightlife, as opposed to the literary Sweeney who is more of a ragged customer and an investigative reporter. In the novel, the nightclub where Yolanda dances is run by a man; in the film, the club’s owner is a woman who’s portrayed by burlesque star Gypsy Rose Lee, who brings much colorful personality to the screen. These changes mostly make sense for the movie version, but personally, I much prefer Brown’s Sweeney to the slicker version acted out by Carey.

Nuances aside (also, there’s no “The” in the film title), the crux of these two versions of the story is basically the same. In the movie, as in the book, we are watching as Sweeney and the local police try to locate and stop The Ripper, and we’re trying to understand what role the disturbing statuette plays in the drama. And in both, there’s the subplot of the mental chess match being played between Sweeney and Yolanda’s overprotective, sinister-seeming manager.

Oswald’s movie is one you don’t hear discussed when people talk about classic crime films. And while it’s not among the very best examples of that genre, it’s a worthy second- or third-tier work of film noir. There’s a strong mood to the film, which presents the story’s suspenseful elements in an effectively intriguing way. Ekberg looks great on the big screen, and her awkward-yet-sexy exotic dance performances bring out her unstable personality more vividly than do any of the book’s passages concerning her. The Red Norvo Trio adds some enjoyable musical moments to the film, and Harry Townes puts on an excellent performance as Yolanda’s protector and Sweeney’s nemesis.

If you like classic crime novels and their cinematic equivalents and haven’t read or seen The Screaming Mimi, get busy.