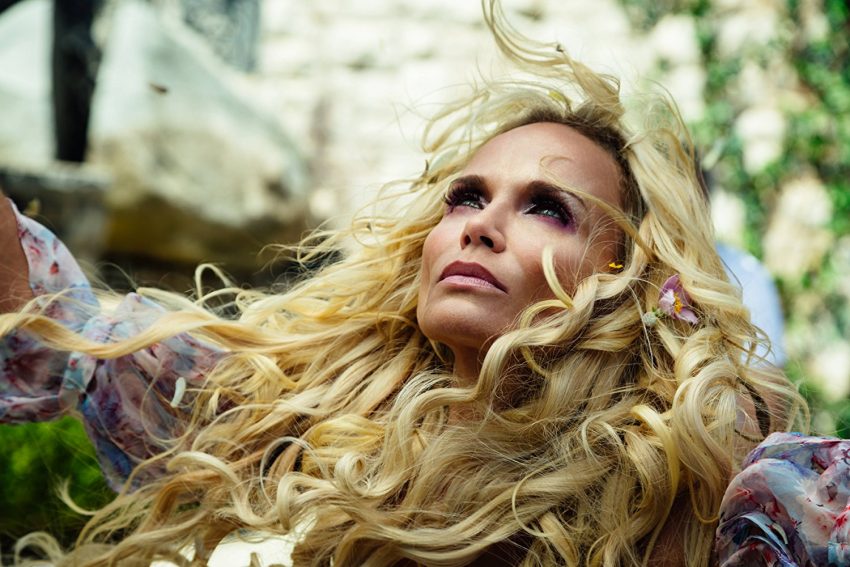 The season finale sees the long overdue returns of Anansi and Bilquis. While Mr. Nancy (Orlando Jones) is tailoring suits for big cheese Wednesday (Ian McShane) and his henchman Shadow (Ricky Whittle), he decides he must tell a story. One of a queen.

We get the rundown of Bilquis (Yetide Badaki), watching her status slowly fade over the centuries into modern times until she is on the streets, destitute and ailing. And here we get a peek at her alliance, seduced to the other side by Tech Boy’s (Bruce Langley) promise of a large internet following, “Worship is a volume business … Whosoever has the most followers wins the game.” As time marches on, she looks none too pleased with having made an association with Tech Boy and the new gods. By show’s end, she’s on a bus on her way to Wisconsin. Knowing the show deviates on occasion from the book, we will have to wait until next season to see where her true allegiance lies. 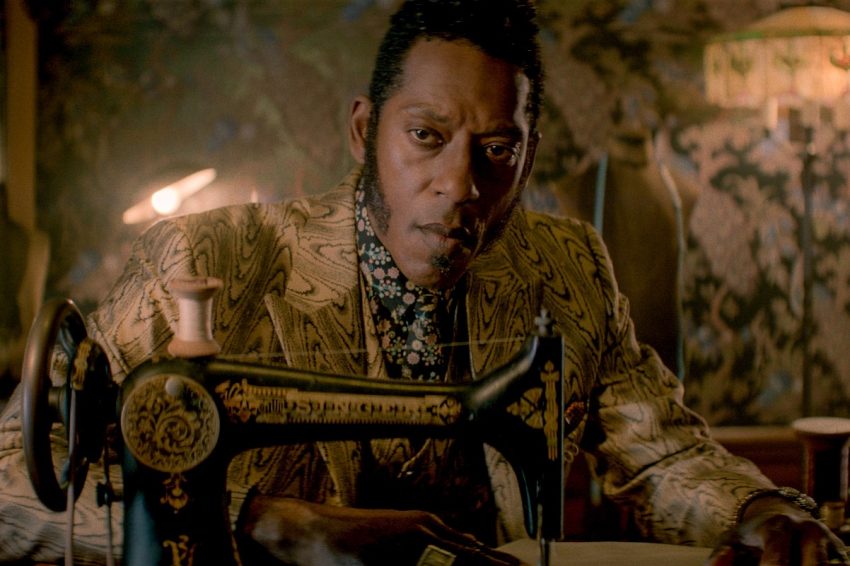 As for Mr. Nancy, once his spiel is over and the threads are done, so is his air time. But the message that he aimed to impart on Wednesday is, “You need a queen.” And that’s just where Wednesday was planning to head next—he and Shadow drive off to Kentucky in hopes of recruiting a goddess. 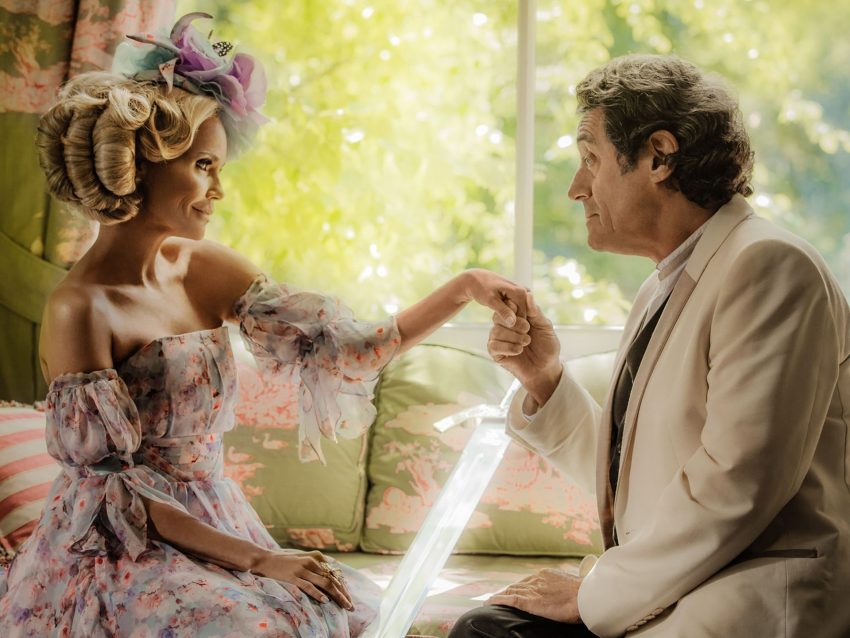 The beautiful spring countryside is laden with lush green foliage and colorful blossoms. And a whole lotta white rabbits. They drive up to an opulent estate where a high-society party is in full swing. It is an Easter celebration with pastel jelly beans and vibrant eggs at every turn, as well as every version of Jesus Christ from around the world. Among the guests is Mother Mary breastfeeding a baby. The pair walks in as the lovely Ostara (Kristen Chenoweth) is toasting the occasion when she spots Wednesday. In a faithful rendering drawn from the novel, she’s quite unhappy with his presence:

Shadow said something that might have been Hello, and the woman smiled at him again. He felt like he was caught in headlights—the blinding kind that poachers use to freeze deer before they shoot them. He could smell her perfume from where he was standing, an intoxicating mixture of jasmine and honeysuckle, of sweet milk and female skin.

The woman—Easter—laughed a deep and throaty laugh, full-bodied and joyous. How could you not like someone who laughed like that? “Everything’s fine,” she said. “How about you, you old wolf?”

“I was hoping to enlist your assistance.”

“At least hear me out before dismissing me.”

“No point. Don’t even bother.”

All the same, Ostara patiently listens to Wednesday’s proposal as he explains how her glory was taken away from her following Jesus’s resurrection on her day, and that the remnants of her praise in the form of candy and plastic eggs are trinkets. Basically, he tells her she’s just a hanger-on who’s riding on Jesus’s coattails these days. 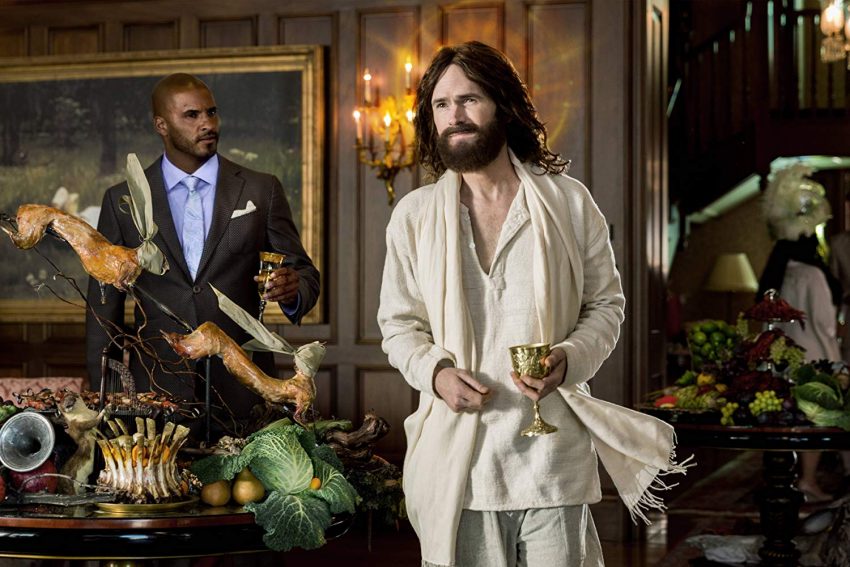 Shadow has a heart to heart with a Jesus sitting on top of the water of an indoor pool. He expresses his doubt to all he has witnessed, going so far as to believe it’s a vivid dream (oh, c’mon!). Jesus replies with a bit of ‘60s hippy-ish advice: “Even if you don’t believe, you cannot travel in any other way than the road your senses show you. And you must walk that road to the end.”

A white rabbit whispers to Ostara that Mad Sweeney (Pablo Schreiber) has brought a dead girl to her house. Owing a favor to the leprechaun, Ostara asks Laura (Emily Browning) why she is dead. Peering deep into Laura’s eye where the crossing between life and death is recorded on the retina, Ostara sees the face of a god and gives Laura—and Sweeney—the bad news: she can’t interfere with a death caused by a god and is unable to rebirth Laura. Then, off she goes.

Laura confronts Mad Sweeney by grabbing him by the balls and lifting him off the floor. In dire pain, he confesses he was the one who killed Laura on Wednesday’s orders so that Shadow would be a man with nothing left to lose. “What does Wednesday have to lose?” she asks, and the leprechaun’s eyes seem to brighten.

Ostara greets her newly arrived guests, Media and Tech Boy, where Media (Gillian Anderson) begins digging for information on Wednesday and putting out feelers for where Ostara stands. 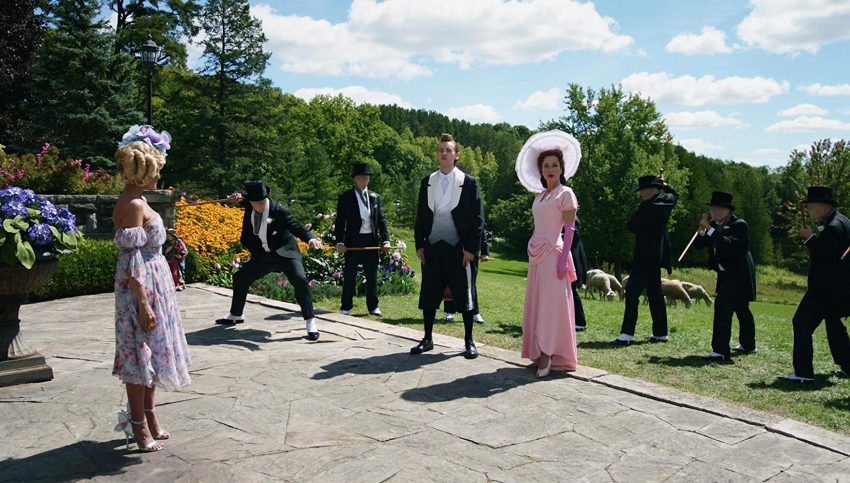 The acting throughout this show has been one triumph after another, with special mentions going to Kristin Chenoweth, who was a bright spot, along with Emily Browning, who was a standout through the season. It pains me to say this because I’ve always enjoyed Gillian Anderson’s roles, but Media has been a bit of a letdown, especially the breathy impersonations of starlets—there’s no sizzle, just fizzle.

Speaking of fizzles, the final scenes where Wednesday reveals to Shadow that he is Odin … yawn. Which is not the fault of Ian McShane one iota. His thundering baritone is used to full effect. The problem is, we the audience already knew (even if you didn’t read the book), and the big reveal only has an effect on Shadow—which begs the question why he hadn’t figured it out sooner. Just as I’d be willing to bet most intrigued viewers did after Episode 1, why didn’t Shadow do a Google search? The all powerful tech-gods avail!

Ostara throws in with Wednesday and turns the stunning landscape brown. After being smacked down by a bolt of lightning, Mr. World (Crispin Glover) tells Wednesday he now has a war on his hands. And the show closes with Laura informing Wednesday that she wants a word with her husband. Shadow gives an ear-to-ear grin at the sight of his rotting wife. As he should, because Laura Moon was the highlight of this eight-episode season … the rest was a pale adaptation of one of the 21st-century’s greatest novels.