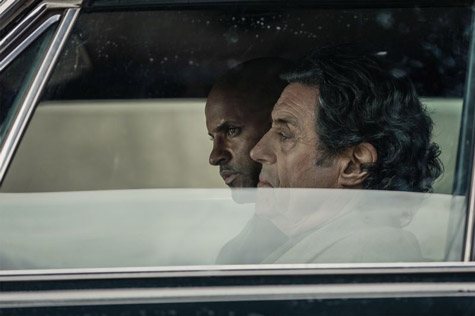 Neil Gaiman’s American Gods is a masterpiece of early 21st-century works, and a big reason for this triumph is the seemingly disjointed threads that make up the narrative—specifically the Coming to America vignettes that explore how multitudes of cultural immortals like Odin, Anansi, and others arrived on the North American shores. Reading Gods is a seamless laminar flow that, for some strange reason, the Starz program lacks.

I’m not sure why it’s not successfully making the transition, but after just three episodes there’s a noticeable discordant disconnect. The acting is superb, but the direction at times feels oddly paced—for example, a checkers game that went on and on a bit too long. The opening theme and musical score is excellent, though the musical selections (and make no mistake, I love my Dylan and CCR) are dated and fail to fit.

In the book, I never questioned why Shadow Moon decided to go along with Mr. Wednesday—it’s so smoothly written—but watching the narrative play out, I can’t help but ask why not run the other way from these combative, mischievous lunatics. It’s kind of like that great anecdote you’ve rehearsed in your head, and when you finally say it out loud, it doesn’t deliver as big. Still, there’s enough flashy stuff happening that it’s far from boring.

Like the first two episodes, “Head Full of Snow” had a killer opening. Remember Mr. Ibis (Demore Barnes) in “The Bone Orchard” narrating the story of the Vikings coming to America? Well, this week’s opening segment introduced Ibis’s partner Mr. Jacquel (Chris Obi). Ibis is Thoth, the Egyptian god known for being a scribe to the underworld, and Jacquel, the incarnation of Anubis, presides over the afterlife and graves. Together, fittingly, they run a funeral home. (Weaving in tales of how the gods arrived and then tying their past glory with their modern roles is a brilliant approach on Mr. Gaiman’s part.) From Gaiman’s novel, Mr. Jacquel describes the good old days:

Back in my day, we had it all set up. You line up when you die, and you answer for your evil deeds and for your good deeds, and if your evil deeds outweighed a feather, we’d feed your soul and your heart to Ammet, the Eater of Souls.

In “Snow,” a grandmother (Jacqueline Antaramian) who dies while preparing dinner gets the opportunity to measure her deeds on the scales with Anubis sitting across from her in a vast desert above the clouds. He thrusts a hand into her chest and wrenches out her heart (“I was using that!” she protests, giving me a good chuckle). It looked to be a close call, but her heart turned out to be lighter than the feather, and her good deeds have earned her the choice of five doors leading to her afterlife. But, she’s hesitant to pick—she doesn’t want to see her father who beat her. So Anubis selects the middle door for her. And as she’s standing in the open doorway into what looks to be nothingness, she wonders if she hasn’t chosen the right gods to follow—she may never see her teeta again. A hairless Sphynx that’s been following the pair walks up and gives her a gentle push into the great abyss of eternity. It got me wondering too, where exactly did she go?

Back to Chicago, where Shadow Moon (Ricky Whittle) is sleeping—how can he sleep knowing his brains are to be bashed out in the morning? He awakens to a noise and climbs the fire escape to the roof where a beautiful young woman is eyeing the starry heavens. She’s the third sister—Zorya Polunochnaya, Midnight Star (Erika Kaar)—who tells Shadow mystically that he’s “on a path from nothing to everything.” She does a nifty conjuring feat where she apparently takes hold of the moon from the sky and morphs it into a coin that she places in Shadow’s hand, implying that it will help him.

Back in the apartment, Shadow challenges Czernobog (Peter Stormare) to a double or nothing game of checkers. This time, he trounces the god, who will now go to Wisconsin with Mr. Wednesday (Ian McShane) but will also kill Shadow immediately after.

Speaking of coins, Mad Sweeney (Pablo Schreiber) is having some very bad luck, and it’s funny as hell. When a driver picks him up alongside the road, a steel pole from a truck ahead of them flies backward and impales the Good Samaritan (who many may have noticed was played by The Kids in the Hall troupe actor Scott Thompson). Sweeney hurriedly searches his pockets for his lucky coin, realizing that Shadow had taken it after their bar fight. Catching up with the ex-con, he demands to have it back, and Shadow tells the Irish Leprechaun to search his wife’s grave. Sweeney goes and finds the coin had sunk through the dirt, burned a hole into the coffin, and—you guessed it—no corpse.

“I sell shit,” Salim (Omid Abtahi) tells the taxicab driver ferrying him back to his hotel. Actually, the freshly minted immigrant sells trinkets that he can’t seem to give away. The driver, wearing dark sunglasses at night, falls asleep on the way. Waking him up, the sunglasses slip down, and Salim notices the man is an ifrit by the blazing eyes of fire. Salim is attracted to the ifrit—aka The Jinn (Mousa Kraish), as he’s called—and invites him to his room where The Jinn promises no wishes. They make love, and this is one instance where I thought the show bettered the book. In Gaiman’s pages, the sex acts are mentioned, but there’s no sense that Salim is transferred to a higher plane of emotion. Here, we have a David Lynch-inspired surrealistic journey to the heavens and back. In the morning, The Jinn is gone, as are all of Salim’s possessions. But in their place are the keys, sweater, and sunglasses of The Jinn. Salim heads out to the taxi, and he seems pleased with his new life.

I guess gods need cash just like everybody else, because Wednesday’s planning to rob a bank, setting up the old scam: hang an “out of order” sign on the ATM and pose as the bank security guard accepting the night deposits. Police show up, take Wednesday’s business card, and call the number—a payphone where Shadow is waiting to vouch for Wednesday.

This is more or less faithful to the book, but with Wednesday’s insouciance, he comes across as less than meticulous in his scheming efforts compared to the book version where he lays out instructions to Shadow in fine detail. Nitpicky, I suppose, but the scene fell a bit flat.

More interesting, Wednesday asks Shadow to think of snow, and after several reminders, bingo, a squall commences … just in time for the scam. We are left to ponder whether Shadow has powers. The episode ends with Shadow returning to his room and—lo and behold—there’s the stray Laura (Emily Browning), sitting on the bed, welcoming him with a warm, “Hi, Puppy.”

The direction is slow—in the boring way—but there’s plenty of flourish and top acting to bring me back.