July 9, 2020
Join Jeffrey B. Burton, author of The Finders, as he discusses domestic thrillers, his favorite authors, and his family secrets.

Sure, I love me my Mitch Rapp and John Rain and Lucas Davenport and Jack Reacher and Charlie Parker and Bobby Lee Swagger, and I’ll continue reading each and every one of their books until I’m hauled out feet first. However, I’ve also found myself developing a deep and growing fondness for Domestic Thrillers.

My adventures in this genre began by reading many of Harlan Coben’s standalone novels. You know, the ones where some poor bastard steps out of the john at his high school prom just in time to spot strange men rushing his date out of the auditorium. As our protagonist chases after them, he makes it outside in time to dodge black SUVs as they race past. We then learn both his girlfriend and her family disappeared that night as though sucked into a Black Hole, but, fifteen years later, our guy catches a glimpse of his old flame at a shopping mall, but she hustles away after being spotted. Then our hero’s quest truly begins as he digs into what really occurred that fateful evening and, by doing such, unearths deeply-buried secrets and awakens equally-malignant villains whom he must now confront if he ever hopes to survive.

Yup . . . I eat that sh*t up. Since Coben, I’ve read everything by Gillian Flynn as well as bestsellers by Paula Hawkins, B.A. Paris, A.J. Finn, etc. I can’t get enough. More, please.

Why, you ask? Well, not only because we have an everyman instead of a lethal weapon as the central character but because . . . “The past is never dead,” as Faulkner warned. “It’s not even past.”

I love family secrets—the deeper the better, the juicier the more delicious. And all families have secrets to some degree or another; and we embrace our inner gossip hound whenever these secrets come tumbling out from the shadows and into the light of day.

Spoiler alert—when I was a child, as my grandmother neared retirement, my father tried to understand why she was so anxious about her social security benefits.

“Because of Lansing’s first wife,” grandma blurted after much back and forth. Grandpa Lansing had died decades earlier.

“Dad was married before you?” my father asked, jaw down to his kneecaps.

Not only had Lansing been married before grandma, but there’d been a child—a baby girl—from that union. Not only had my father—in his mid-thirties—discovered that his father had previously been married, but that he had an older sister he’d never met or heard about.

My genealogy-sleuth cousin ferreted out Lansing’s marriage certificate (both were nineteen at the time) as well as their daughter’s birth certificate (born soon after they’d tied the knot, hmmm—whatever might that indicate?). But then a couple years pass and we find young Lansing marrying my grandmother, literally starting over—a new family in a different city.

All clues point toward Lansing having walked away from his firstborn and not looked back. Now Old Lance isn’t around to defend himself, to pound the table and claim it was the iceman’s child (the iceman cameth), not his, but—Jesus Christ, Lansing, WTF?—you ditched an infant. I am reminded of a line from Bruce Springsteen’s Highway Patrolman:

Man turns his back on his family, he ain’t no friend of mine.

And if things weren’t muddled enough, there’s this entire paradox—a causality loop—for me to decipher. If young Lansing hadn’t had enough SOB in him to turn his back on his first family . . . I wouldn’t be here . . . and I love being here (plenty of pancakes in my future). Ergo, my existence stems from the egotistical act of a cold-hearted lout.

However, The Boss—in his infinite wisdom—grants me a minor peg on which to hang my hat in these two lines from Hungry Heart:

Got a wife and kids in Baltimore, Jack

I went out for a ride and I never went back

Did Lansing go out for a ride and never come back?

Perhaps, like in a Harlan Coben thriller, I could dig into my grandfather’s past in case he tripped over some kind of grand conspiracy. Since this occurred during the Great Depression, perhaps nefarious forces were at play—a cabal of high-powered bankers short selling through shell companies, no doubt—that compelled young Lansing to abandon his newborn daughter for her own safety . . . and to barely escape with his life.

Ah, hell—who am I kidding?—if I ever did go digging, I’d wind up getting kicked in the nethers by the pissed-off great-grandson of Lansing’s firstborn.

In an odd way—in terms of plot twists and turns—I feel as though I’ve let Harlan and Gillian and Paula and the rest of the Domestic Thriller team down. I feel as though I should have scattered Easter eggs for my daughter and her children to unravel after I’ve shed my mortal coil. Perhaps some hidden half-sibling ala Grandpa Lansing . . . perhaps some kind of pilfered treasure . . . perhaps something or, god forbid, someone buried in the crawlspace . . .

Alas, I’ve got bupkis to offer.

All my daughter will be left with to tell folks is that, “Dad was basically a good guy—no skeletons or anything—but, sometimes, when he didn’t think you were looking . . . he’d pick his nose and wipe it on the underparts of furniture.” 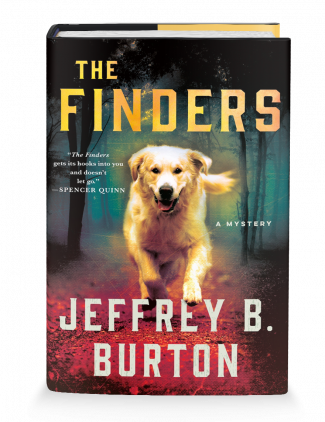 About The Finders by Jeffrey B. Burton:

Mason “Mace” Reid lives on the outskirts of Chicago and specializes in human remains detection. He trains dogs to hunt for the dead. Reid’s coming off a taxing year—mourning the death of a beloved springer spaniel as well as the dissolution of his marriage. He adopts a rescue dog with a mysterious past—a golden retriever named Vira. And when Reid begins training Vira as a cadaver dog, he comes to realize just how special the newest addition to his family truly is…

Suddenly, Reid and his prize pupil find themselves hurled into a taxing murder case, which will push them to their very limits. Paired with determined Chicago Police Officer Kippy Gimm, Mace must put all his trust in Vira’s abilities to thwart a serial killer who has now set his sights on Mace himself.

Jeffrey B. Burton is the author of The Chessman and The Eulogist. He is an active member of Mystery Writers of America, International Thriller Writers and the Horror Writers Association and lives in St. Paul, Minnesota with his family.