NO PURCHASE NECESSARY. A PURCHASE DOES NOT INCREASE YOUR CHANCE OF WINNING.

Limit one entry per person or per household. All entrants must have a valid email address. The entry must be fully completed; mechanically reproduced; incomplete and/or illegible entries will not be accepted. In case of dispute with respect to online entries, entries will be declared made by the authorized account holder of the e-mail address submitted at the time of entry. “Authorized account holder” is defined as the natural person who is assigned to an e-mail address by an Internet Access Provider, on-line service provider, or other organization (e.g., business, educational institution, etc.) that is responsible for assigning e-mail addresses for the domain associated with the submitted e-mail address. Any other attempted form of entry is prohibited; no automatic, programmed; robotic or similar means of entry are permitted. Sponsor, and its parent companies, subsidiaries, affiliates, partners and promotion and advertising agencies are not responsible for technical, hardware, software, telephone or other communications malfunctions, errors or failures of any kind, lost or unavailable network connections, website, Internet, or ISP unavailability, unauthorized human intervention, traffic congestion, incomplete or inaccurate capture of entry information (regardless of cause) or failed, incomplete, garbled, jumbled or delayed computer transmissions which may limit one’s ability to enter this Promotion, including any injury or damage to participant’s or any other person’s computer relating to or resulting from participating in this Promotion or downloading any materials in this Promotion. Entries become property of Sponsor and will not be returned. Automated entries are prohibited, and any use of such automated devices will cause disqualification. Sponsor and its advertising and promotions agencies are not responsible for lost, late, illegible, misdirected or stolen entries or transmissions, or problems of any kind whether mechanical, human or electronic.

2. Random Drawing: A random drawing will be held from all eligible, correctly completed entries received on a timely basis, on or about October 5, 2015, by Macmillan, whose decisions concerning all matters related to this sweepstakes are final.

3. Notice to Winners: Winner will be notified by e-mail. Winner may be required to sign and return an affidavit of eligibility and publicity/liability release within fifteen (15) days of notification attempt or prize may be awarded to alternate winner. Return of any prize notification as undeliverable will result in disqualification and alternate winner will be selected. If an entrant selected in the drawing is a resident of Canada, to be declared a winner he/she must correctly answer, without assistance of any kind, a time-limited mathematical skill-testing question to be administered by telephone or email. If a potential winner who is a resident of Canada cannot be contacted, and/or the skill-testing question cannot be administered, within seven (7) days he/she will be disqualified and the prize may be awarded to an alternate entrant. If a winner is a minor in his/her jurisdiction of residence, prize will be awarded to minor’s parent or legal guardian, who must follow all prize claim procedures specified herein and sign and return all required documents.

5. Odds of winning depend upon the number of eligible entries received. If any prize is won by a minor, it will be awarded in the name of minor's parent or legal guardian. Each entrant selected as a potential winner must comply with all terms and conditions set forth in these Official Rules, and winning is contingent upon fulfilling all such requirements. Sponsor makes no warranties with regard to the prize.  Prize is not transferable.  No substitutions of prize allowed by winner, but Sponsor reserves the right to substitute a prize of equal or greater value. Prize is not redeemable by winner for cash value. All taxes, fees and surcharges on prize are the sole responsibility of winner.

6. Eligibility: Only open to residents of the 50 United States, the District of Columbia, and Canada (excluding the province of Quebec), age 18 years and older at the time of entry. Void in Puerto Rico, the Province of Quebec, and where otherwise prohibited by law. Employees, and members of their families, of Sponsor, its parent, subsidiaries, and affiliates are not eligible to enter. This promotion is intended for viewing in the United States and Canada only and shall only be construed and evaluated according to United States law. You are not authorized to participate in the sweepstakes if you are not located within the United States or Canada.

7. General: Sponsor and its representatives are not responsible for technical, hardware, software or telephone malfunctions of any kind, lost or unavailable network connections, or failed, incorrect, incomplete, inaccurate, garbled or delayed electronic communications caused by the sender, or by any of the equipment or programming associated with or utilized in this sweepstakes which may limit the ability to play or participate, or by any human error which may occur in the processing of the entries in this sweepstakes. If for any reason, (including infection by computer virus, bugs, tampering, unauthorized intervention, fraud, technical failures, or any other cause beyond the control of Sponsor, which corrupts or affects the administration, security, fairness, integrity, or proper conduct of this sweepstakes), the Sweepstakes is not capable of being conducted as described in these rules, Sponsor shall have the right, at its sole discretion, to cancel, terminate, modify or suspend the sweepstakes. Limit one prize per person or household. By accepting prize, the winner grants to Sponsor the right to use his/her name, likeness, hometown, biographical information, in advertising and promotion, including on the Site, without further compensation or permission, except where prohibited by law. By participating in the sweepstakes, entrant and winner release Sponsor, its parent, subsidiaries, affiliates, subsidiaries, suppliers, and agents, from any and all liability for any loss, harm, damages, cost or expense, including without limitation property damages, personal injury and/or death, arising out of participation in this sweepstakes or the acceptance, use or misuse of the prize.  Sponsor may prohibit an entrant from participating in the sweepstakes or winning a prize if, in its sole discretion, it determines that said entrant is attempting to undermine the legitimate operation of the Sweepstakes by cheating, hacking, deception, or other unfair playing practices (including the use of automated quick entry programs) or intending to annoy, abuse, threaten or harass any other entrants or Sponsor representatives. All legal responsibilities of a minor under these Official Rules will be assumed by the minor’s parent/legal guardian.

CAUTION: ANY ATTEMPT BY AN ENTRANT TO DELIBERATELY DAMAGE ANY WEB SITE OR UNDERMINE THE LEGITIMATE OPERATION OF THE SWEEPSTAKES MAY BE A VIOLATION OF CRIMINAL AND CIVIL LAWS AND SHOULD SUCH AN ATTEMPT BE MADE, SPONSOR RESERVES THE RIGHT TO SEEK DAMAGES FROM ANY SUCH PERSON TO THE FULLEST EXTENT PERMITTED BY LAW. 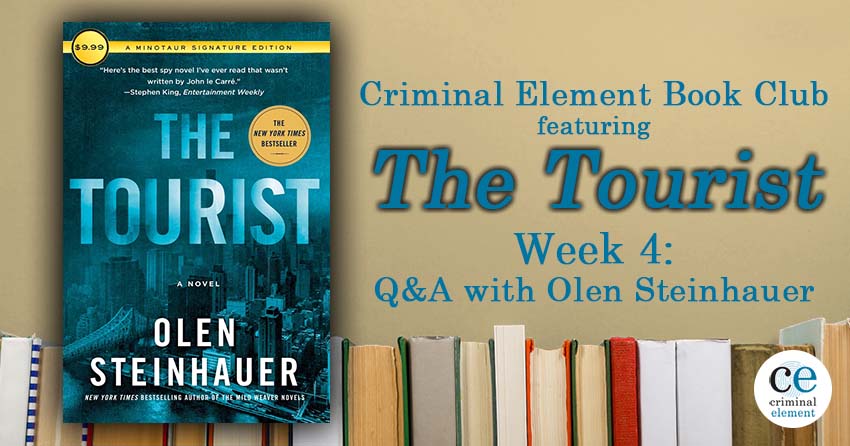 Now that you’ve had a chance to begin reading (or finish) The Tourist, this week we wanted to give you a chance to ask some questions. We’re opening up the floor to book club participants for an exclusive Q&A with Olen Steinhauer. Here’s how it will work: Submit your questions about The Tourist or the…

The Third to Die by Allison Brennan: Exclusive Excerpt

An edgy female police detective… An ambitious FBI special agent. Together they are at the heart of the ticking-clock investigation for a psychopathic serial killer. Detective Kara Quinn, on leave from the LAPD, is on an early morning jog in her hometown of Liberty Lake when she comes upon the body of a young nurse.…