It's the holiday season, so make time to register for your chance to win these 8, great books!

NO PURCHASE NECESSARY. A PURCHASE DOES NOT INCREASE YOUR CHANCE OF WINNING. Sweepstakes open to legal residents of 50 United States, D.C., and Canada (excluding Quebec), who are 18 years or older as of the date of entry. Promotion begins December 15, 2015, at 12:00 pm ET, and ends December 29, 2015, 11:59 am ET. Void in Puerto Rico and wherever prohibited by law. Click here for details and official rules.

Away in a Manger by Rhys Bowen

It's Christmastime in 1905 New York City, and for once, Molly Murphy Sullivan is looking forward to the approaching holidays. She has a family of her own now: she and Daniel have a baby son and twelve-year-old Bridie is living with them as their ward. As Molly and the children listen to carolers in the street, they hear a lovely voice, the voice of an angel, and see a beggar girl huddled in a doorway, singing “Away in a Manger.” Bridie is touched by the girl's ragged clothes and wants to help her out if they can. They give her a quarter, only to watch a bigger boy take it from her. But Molly discovers the boy is the girl's older brother. They've come from England and their mother has disappeared, and they're living with an aunt who mistreats them terribly.

Molly quickly realizes that these children are not the usual city waifs. They are well-spoken and clearly used to better things. So who are they? And what's happened to their mother? As Molly looks for a way to help the children and for the answers to these questions, she gets drawn into an investigation that will take her up to the highest levels of New York society.

Detective Sergeant Frank Malloy and Sarah Brandt are not the only ones who have recently tied the knot. Family friend Mrs. O’Neill was delighted when her daughter Una wed the seemingly wealthy and charming Randolph Pollock. She didn’t wonder why such an affluent man would want to marry a poor Irish girl, no matter how pretty she was. But now Mrs. O’Neill has a problem.

Pollock’s servants have found their employer bludgeoned to death with Una cradling his body. Rendered mute by the horror of her husband’s death, Una cannot explain what happened, so the police have charged her with murder and locked her away in the Tombs to await trial.

Mrs. O’Neill would like Frank to investigate the case and save Una, yet with Frank and Sarah still on their honeymoon, it’s up to the other members of their newly formed household to do some detective work. But solving the mystery behind Pollock’s death means first discovering the truth about who he really is…

The eleven o’clock lady has always been one of garden club president Liz Lacy’s favorite spring wildflowers. The plant is so named because the white blossoms don’t open until the sun shines directly on them and wakes them up.

But another Eleven O’Clock Lady is never going to wake up again. Rona Jean Hancock—a telephone switchboard operator who earned her nickname because her shift ended at eleven, when her nightlife was just beginning—has been found strangled with her own silk stocking in a very unladylike position.

Gossip sprouts like weeds in a small town, and Rona Jean’s somewhat wild reputation is the topic of much speculation regarding who might have killed her. As the Darling Dahlias begin to sort through Rona Jean’s private affairs, it appears there may be a connection to some skullduggery at the local Civilian Conservation Corps camp. Working at the camp, garden club vice president Ophelia Snow digs around to expose the truth…before a killer pulls up stakes and gets away with murder.

Once Upon a Crime by P.J. Brackston

Gretel (yes, that Gretel) is now 35, very large, still living with her brother Hans, and working as a private investigator.

The small, sleepy town of Gesternstadt is shaken to its pretty foundations when the workshop of the local cart maker is burnt to the ground, and a body is discovered in the ashes. It is Gretel who notices that the cadaver is missing a finger. At first she does not see this as significant, as her mind is fully focused on a new case. Not that she wouldn’t far rather be investigating an intriguing murder, but her client is willing to pay over the odds, so she must content herself with trying to trace three missing cats. It is not until she is further into her investigations that she realizes the two events are inextricably and dangerously connected, and that the mystery of the missing cats will lead her into perilous situations and frightening company.

Very soon Gretel finds herself accused of kidnapping Princess Charlotte, twice locked up in the cells at the Summer Schloss, repelling the advances of an amorous troll, strapped to a rack in Herr Schmerz’s torture chamber, and fleeing a murder charge. With dubious help from her brother (whose scant wits are habitually addled by drink), she must prove her innocence, solve the puzzle of the unidentified corpse, and find the stolen cats before they meet a grisly end.

Trimmed with Murder by Sally Goldenbaum

In Sea Harbor, the holidays mean cozy fires, festive carols, and soft skeins of yarn waiting to become hats and sweaters and scarves. And this year, Izzy and the other Seaside Knitters are also knitting tiny ornaments to decorate a tree for the first annual tree-trimming contest.

Their holiday cheer is multiplied when Izzy’s younger brother, Charlie Chambers, unexpectedly arrives to volunteer at a local clinic. He brings with him outspoken hitchhiker Amber Hanson, who is returning to Sea Harbor to claim an inheritance. She quickly reacquaints herself with the area—and forms an unlikely friendship with Charlie. But their bond is shattered when her body is found beneath the undecorated trees on the Harbor Green.

Charlie is a suspect in the murder, so Izzy and her fellow Knitters step in to uncover the truth. Their journey takes them into Charlie’s past and tests their fierce love for him. But it’s only by peeling away long-buried secrets that they can hope to restore joy to the season and enjoy the shining lights of the newly decorated trees….

Not Even Past by Dave White

Finally, Jackson Donne has it figured out. After leaving the private investigation business, he's looking toward the future — and getting married to Kate Ellison. Donne is focused on living the good life — planning the wedding, finishing college, and anticipating a Hawaiian honeymoon — until he receives an anonymous email with a link and an old picture of him on the police force. Once Donne clicks the link, nothing else in his life matters. Donne sees a live-stream of the one thing he never expected. Six years ago, his fiancée, Jeanne Baker died in a car accident with a drunk driver. Or so Donne thought.

He’s taken to a video of Jeanne bound to a chair, bruised and screaming, but very much alive. He starts to investigate, but quickly finds out he’s lost most of his contacts over the years. The police hold a grudge going back to the days when he turned in his corrupt colleagues, and neither they nor the FBI are willing to believe a dead girl’s been kidnapped. Donne turns to Bill Martin — the only man to love Jeanne as much as he did — for help. And that decision could cost him everything.

The Stitching Hour by Amanda Lee

Marcy’s shop, the Seven-Year Stitch, is one year old this October so it’s time to party in little Tallulah Falls, Oregon. Aside from the Halloween decorations and festive stitching kits and patterns, Marcy’s got all sorts of celebratory swag, including Seven-Year Stitch key rings and goodie bags.

Unfortunately, her new neighbors might spoil the revelry. An eccentric couple has opened a haunted house next door, and all that screaming will certainly scare off customers. But there’s even more to be frightened of after a local waitress is found dead on the sidewalk with mysterious markings on her neck—and one of Marcy’s key rings beneath her. With no time to hem and haw, Marcy must act fast if she hopes to restore the peace to Tallulah Falls…

Ruth’s beloved grandfather instilled in her a love of timepieces. Unfortunately after her grandmother died and he remarried, Ruth and Grandpa Thom became estranged. She’s wanted to reconnect after her recent divorce, but sadly they’ve run out of time. Her grandfather has been found dead after a break-in at his shop—and the police believe he was murdered.

Now Ruth has been named the heir to Grandpa Thom’s clock shop, the Cog & Sprocket, in the small Berkshire town of Orchard, Massachusetts. As soon as she moves into the small apartment above the shop and begins tackling the heaps of unfinished work, Ruth finds herself trying to stay on the good side of Grandpa’s bossy gray cat, Bezel, while avoiding the step-grandmother she never wanted. But as old secrets and grudges start to surface, Ruth will have to kick into high gear to solve the killer case before someone else winds up dead… 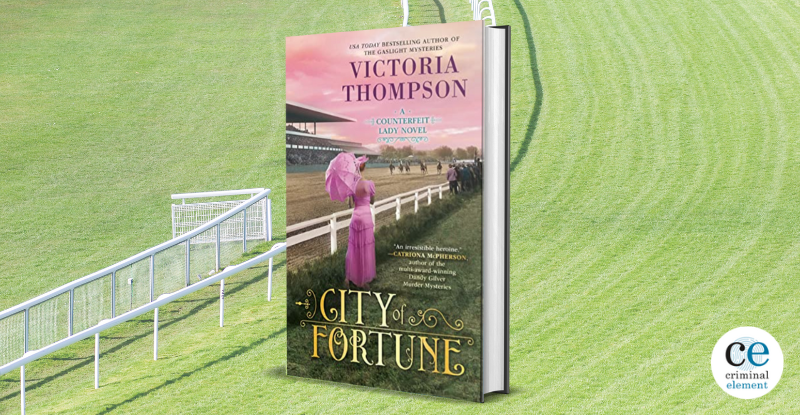