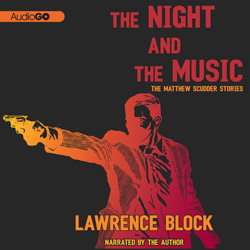 CLICK HERE TO ENTER for a chance to win one of five digital downloads of the audiobook edition of The Night and the Music by Lawrence Block, a collection of rare and re-issued short fiction featuring private eye Matthew Scudder, narrated by the author himself (available December 1, 2012).

NO PURCHASE NECESSARY. A PURCHASE DOES NOT INCREASE YOUR CHANCE OF WINNING. You must be 18 or older and a legal resident of the 50 United States or D.C. to enter. Promotion begins December 11, 2012, at 12 pm ET, and ends December 18, 2012, 11:59 am ET. Void in Puerto Rico and wherever prohibited by law. Click here for details and official rules.

The conflicted, evolving character of P.I. Matthew Scudder became an iconic figure in crime fiction over seventeen novels, but he's featured in notable short fiction as well. Block's nine Scudder stories and two novellas are collected here and narrated by the creator himself.

The Night and the Music opens with a pair of late-'70s novelettes, Out the Window and A Candle for the Bag Lady, followed by the Edgar-winning “By the Dawn’s Early Light,” “Batman's Helpers,” and the Shamus-winning “The Merciful Angel of Death.” Though some of these stories originally appeared in such magazines as Alfred Hitchcock's Mystery Magazine, Ellery Queen's Mystery Magazine, and Playboy, the title vignette, “The Night and the Music,” was actually written for a NYC jazz festival program.

“Looking for David” is followed by “Let's Get Lost” and “A Moment of Wrong Thinking.” The next tale, “Mick Ballou Looks at the Blank Screen,” has only appeared before as the text of a limited-edition broadside. Several stories look backward as Scudder recounts events from his former life as a cop, first as a patrolman partnered with the legendary Vince Mahaffey, then as an NYPD detective leading a double life. “One Last Night at Grogan’s” concludes this collection with a never-before published conversation between Matt Scudder and Mick Ballou, a story both moving and elegiac.

If that tour of the contents weren't enough, just listen to this excerpt from Out the Window, the tale of a doomed waitress,  courtesy of AudioGo: