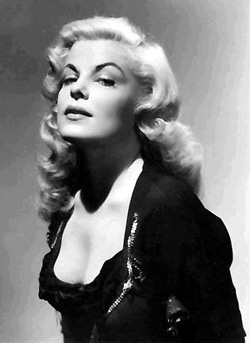 Consider now the strange case of Cleo Moore. Blonde, buxom, and beautiful, Cleo seemed like another Marilyn Monroe clone in the 1950s. She got her start in film in 1948 when she was only twenty, and she was soon cast in a series of bit roles that called for a pretty girl who could fill out a sweater.

She had a nice part as a junkie’s masochistic girlfriend in Nicholas Ray’s 1952 On Dangerous Ground where, with only a few minutes of screen time, she was absolutely riveting. That bit part should have led to better things, but it didn’t. The same year, however, she starred in Strange Fascination for director Hugo Haas. She’d go on to make another six films for Haas, most of them low budget potboilers featuring Cleo as a sexy siren luring a man (usually Haas himself) to his doom. After their collaboration had run its course, Moore announced she was going to run for governor of Louisiana, married a real estate tycoon instead, and quit the movie business. She died suddenly of a heart attack when she was 44 years old.

What none of that quite explains is the movie star quality that Moore possessed but that no one ever quite captured to its full effect. Watching her scene with Robert Ryan in On Dangerous Ground, it’s difficult to believe that Hollywood didn’t fling open the gates for her. Of course, actor-writer-producer-director Hugo Haas saw something in her. Their collaboration wasn’t exactly Sternberg and Dietrich, but it had its charms.

Take One Girl’s Confession, their second film together. Cleo plays a waitress toiling away for mean Mr. Stark, a grumpy old man who once cheated Cleo’s father out of all of his money. The old guy has a large bundle of cash saved up from some vague illegal dealings, so one night Cleo breaks into his room and steals the money. Mr. Stark shows up with the cops at her door the next morning, and Cleo surprises everyone by blithely admitting to the theft but refusing to disclose where she hid the cash. “Do your duty and take me to jail,” she tells the cops. Cleo’s done the math. She’ll do one to three years in prison, then she’ll get out and pick up the $25,000 she ripped off. After three years of doing prison laundry, she gets out and grabs a waitressing job at a bar owned by a gambler named Damitrof (director Hugo Haas). She wants to lay low until she’s sure the heat has died down; then she’ll go pick up her money. In the meantime, she meets a handsome fisherman (Glenn Langan), and she begins to develop an affection for Damitrof. When the gambler loses everything one night in an apocalyptic hand of poker, Cleo tells him she knows where she can get the money to cover his debts. That’s not the last twist of the plot however, and the movie careens through a lot of melodramatic turns of fate before we get to an upbeat ending.

One Girl’s Confession is a lot of silliness, but Haas’s moniker as the “European Ed Wood” is undeserved. For one thing, Haas himself was a good actor in the right role, and as the gregarious gambler here he’s excellent. As a director, he moves his entire film along efficiently. Some of the later Haas/Moore films betray their cheapness, but One Girl’s Confession was distributed by Columbia Pictures, and it has the look and feel of a perfectly respectable B-picture. Haas was a goofy, melodramatic story plotter, but his dialog has some zip in it, such as when Haas tells his girlfriend not to be jealous of Cleo: “I haven’t given her a second thought” and she snaps back, “Still working on the first?”

Most importantly, with Cleo Moore, Haas had a real movie star on his hands. The camera loves her and her icy blue eyes, the way she’ll chew the inside of her mouth when she’s thinking. She wasn’t simply a Monroe-clone—and if she wasn’t as effervescent as Marilyn, she wasn’t as coy either. There was a tough-minded woman behind those big blue eyes. It’s too bad the rest of Hollywood didn’t notice.