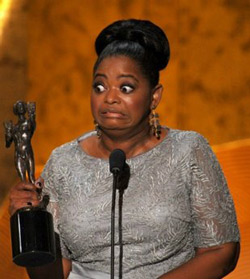 Last fall, a reboot of the popular series Murder, She Wrote was announced by NBC. The woman forever considered THE Jessica Fletcher, Angela Lansbury, didn't much like the news, despite admiring the work of award-winning actress Olivia Spencer, a much-younger woman than the original character, slated to play the new Jessica as a hospital administrator who moonlights as a writer. Since then, the project has been dropped. According to The Wrap:

The reboot, which received a put-pilot commitment from the network, would have starred Octavia Spencer as a writer who solved mysteries and was described as a “light, contemporary procedural, in the vein of ‘Bones’ or ‘Fargo.’”

There's room in our hearts (and DVRs) for a clever and charming new series without forcing something that doesn't quite fit, and we hope that the talented people involved find a new way to bring us the quirk and crime.