August 30, 2021
Nancy Springer, the author of Enola Holmes and the Black Barouche, did not see herself writing mysteries...until she unexpectedly won an Edgar Award. Read on to see how Nancy eventually created the Enola Holmes character.

Plus: Leave a comment on this post to enter for your chance to win a hardcover copy of Enola Holmes and the Black Barouche!

Scribbling my first novels back in the 1970s, already I knew, just knew, that I would never write mystery. Not. Ever. I loved reading classical mystery novels, but the plotty plots didn’t feel right for me as a writer, or the red herrings, or the first murder, the second murder, the third murder, or any subsequent murders. I couldn’t just kill off people that way, so I figured I would steer clear of mystery.

However, years later when I was writing YA, I decided to concoct something for reluctant readers—a counter-intuitive idea to start with, like making guns for pacifists or raising beef cattle for vegetarians, so I didn’t mind just this one time murdering someone—on the first page, no less, to get the readers’ attention, and in order to write a piercingly emotional story. With my focus on the grieving process as I wrote the short novel, I didn’t worry about catching the killer. However, when I handed in the manuscript, important people such as my agent and my editor insisted that I needed to solve the murder, so just to make them happy, I phoned my brother, a retired cop, and asked him who was most likely to have done it. He told me, and I plugged in his answer. Fine. Whatever.

To my utter astonishment, the book, once published, won an Edgar.

I still didn’t think I really wrote “mystery.” But this illusion was shattered a year later, when my next book for young people, about a girl who wanted to find out who her parents were, also won an Edgar.

“You should write more mystery,” hinted my literary agent.

So, over the next several years, I gave it a try, and in a move that seems snobbish in hindsight, I shifted gears, aspiring to move out of YA readership and into the grand market of grown-ups. I managed to sell five mystery short stories, and three of them even had murder in them. But that’s about as far as I got with dead bodies. They just didn’t resonate with me, emotionally. Call it a character defect, but I’ve never deeply invested in justice for corpses.

What I have deeply cared about is finding the lost who are alive. Throughout my adult life I have been drawn to books or TV, fiction or nonfiction, about abducted, kidnapped, or missing persons. I attempted two psychological suspense novels involving abducted children, and while both were published, neither of them sold well. So I shrugged and let go of the idea of writing any more of that stuff. Mystery minus murder did not seem to be working for me anymore.

And that would have been the end of it, I think, if my longtime YA editor hadn’t phoned and told me, in his usual pointy-headed impetuous manner, that he wanted me to write something “set in deepest, darkest London at the time of Jack the Ripper.”

What the, um, what the Dickens?  I had written King Arthur stuff and Robin Hood stuff for this editor, but Victorian? I mean, really and truly historical?? I couldn’t. Or at least, I never had. Thrashing about mentally, I flailed for some equivalent of King Arthur or Robin Hood in a top hat and spats, a Victorian legendary hero…

Now, until this moment, you see, the mystery genre was not thought of.

But after this moment, it was inevitable.

And so was a female protagonist. Feminist that I am, I had given Robin Hood a daughter. Could I do the same for Sherlock Holmes?

No. No, the thought lasted for only an eyeblink. I simply knew that the great and ineluctably bachelor Sherlock Holmes had never, ever begot children. After figuring out the necessary timeline, I was able to give him a much younger sister instead.

Thus, once again, I found myself writing mystery minus murder, because my brainchild Enola Holmes, just like me, wanted to be a Perditorian, a finder of the lost.

It’s a mystery to me how I, having always been a “seat-of-the-pantser” as a writer—how did I manage the plots? Each of the six novels has three plots braided together: Enola looking for her missing mother; Enola eluding her older brothers, who want to send her to a finishing school; and also Enola brilliantly locating some by-the-way missing person. I say by-the-way because the “best part,” as the children say, is not solving the case; it is how utterly and repeatedly Enola outwits Sherlock, to his chagrin and surprising pride. In a way, all six novels together can be seen as a Sherlock Holmes case from the viewpoint of the subject: Sherlock Holmes and the Case of the Missing Sister.

True to my previous history in writing YA mysteries minus murder, two of the six Enola Holmes novels were nominated for Edgars. They didn’t win, and I admit I was disappointed, but then, as a sort of consolation prize, I was given a movie, so I can’t complain. And now I have another murderless mystery publication to look forward to: Enola Holmes and the Black Barouche, to be released August 31, 2021. So, regarding mystery minus murder and me, the eventual outcome could not be more salubrious. 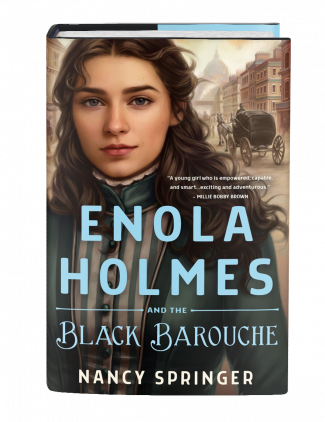 Enola Holmes and the Black Barouche Comment Sweepstakes: NO PURCHASE NECESSARY TO ENTER OR WIN.  A purchase does not improve your chances of winning.  Sweepstakes open to legal residents of 50 United States, D.C., and Canada (excluding Quebec), who are 18 years or older as of the date of entry.  To enter, complete the “Post a Comment” entry at https://www.criminalelement.com/mystery-minus-murder/ beginning at 3:30 p.m. Eastern Time (ET) August 30, 2021. Sweepstakes ends at 3:29 p.m. ET September 13, 2021. Void outside the United States and Canada and where prohibited by law. Please see full details and official rules here. Sponsor: Macmillan, 120 Broadway, New York, NY 10271.

NANCY SPRINGER is the author of the nationally bestselling Enola Holmes novels, including The Case of the Missing Marquess, which was made into the hit Netflix movie, Enola Holmes. She is the author of more than 50 other books for children and adults. She has won many awards, including two Edgar Awards, and has been published in more than thirty countries. She lives in Florida.