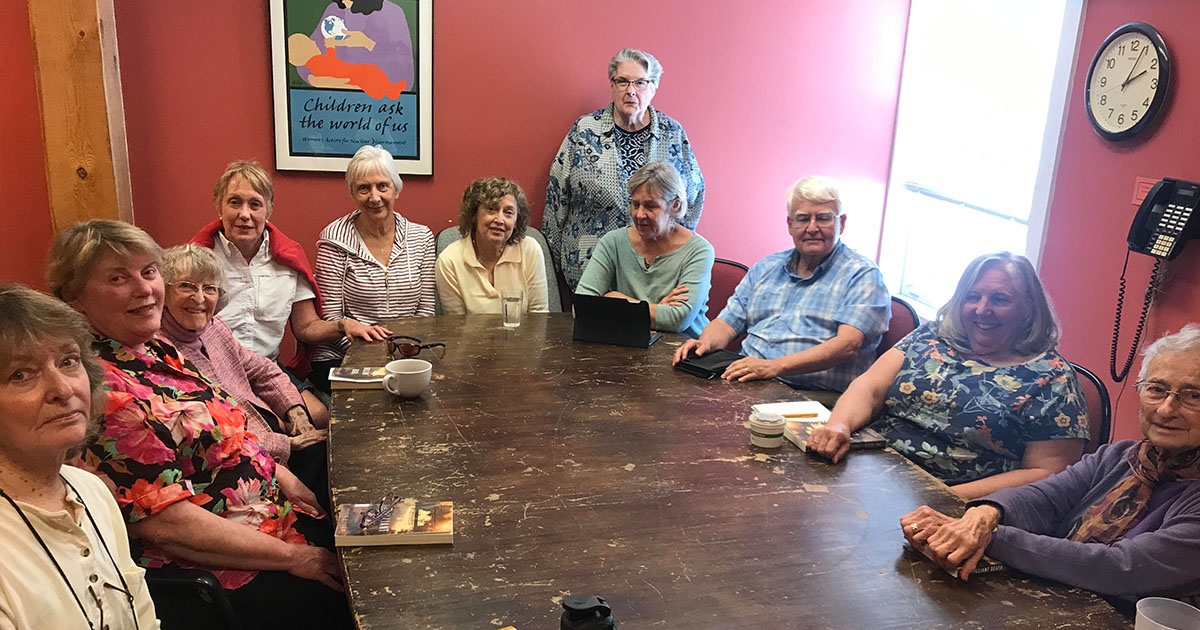 Margot Mayor is New York Times bestselling author Archer Mayor‘s partner-in-crime and the Director of Marketing, New Projects and Publicity at archermayor.com. Join her for a discussion about how she tapped into a mystery book club and set up a think tank to get useful feedback regarding the trajectory of the Joe Gunther novels. Bonus: Comment on the post to enter for a chance to win 10 copies of Bomber’s Moon to share with your own bookclub!

An author usually visits a book club to discuss their current book and to delve into backstory (allowing the members an insider’s peek behind the curtain). It’s nice and polite, and involves some sugar-coated bribery and coffee as accompaniment.

A few years ago, we wanted to understand more about Archer’s readers, since, except for events, there is not usually one-on-one contact.  So with book clubs requesting visits or Skype calls, we decided to start with who we know: a local mystery book group.

Archer is always open to a fresh location or an interesting new twist. He is intrigued by the notion that while a writer may work in isolation, the art of writing is actually a “collaborative” activity—a conversation between the writer and his readers. Archer appreciates a fresh point of view, a twisted plot suggestion.

This type of discussion could be an opportunity to gain some valuable input, especially from fans who know Vermont, the stomping ground of his detectives (and bad guys).

Archer and I therefore decided to ask the Northshire Bookstore Mystery Club, in Manchester Center, Vermont, to meet with me.

Because, given the guidelines we set—that club members be uninhibited, critical, even blunt if they chose—we thought it might be easier on them (and him) if Archer were not in attendance, at least until the very end. (Writers can be sensitive.)

And while the format for this might have been unusual, it didn’t hurt that the table was fully loaded with pastry.

Being New Englanders, we were braced for unvarnished truth, good and bad. What we got exceeded good, in several ways. Yes, many compliments were forthcoming, directed at the regionalism, characters, and intricate plots of the series.  And the research. Mystery readers often love to learn something new. But then they rolled up their sleeves.

I asked questions: Which book do you like best? Would you change anything about the series? And I let them wander in their comments and focus, to see where it might lead.

The attendees were eager to suggest improvements or just changes, many of which had an intriguing basis. The characters in this series had clearly so captured book club members that they wanted to know more than what Archer had been supplying. This was good news!

Was this helpful? Often there is an overlap of a few months when Archer is finishing, revising and editing his “new” book, while he has already started the next. So timing was good for him to mull over what he heard from the group, and either incorporate a few of their notions, or use them as springboards to ideas of his own.

One fan of 28 years, for example, suggested a prequel, said she’d always wanted to know more about the characters, before their law enforcement days. As a result, Archer wrote a story called “CrossCut,” delving into one of his investigator’s beginnings—Sammie Martens—her family history, her first meeting Joe Gunther, becoming a cop.

Read an excerpt of “Crosscut” now!

Another reader at the end of the table said he wanted the focus to stray a bit from Joe (the main character) saying, “Can’t he take more of a back seat?”

This was a particularly interesting suggestion, in that Archer had experimented with the same notion early on, especially in THE SNIPER’S WIFE, which almost exclusively dealt with Willy Kunkle, and liked it. Thus encouraged, he has since done it more often and in more depth.

Archer recently placed two strong young women in the forefront of one his books—a Private Investigator and a Reporter—and garnered some terrific reviews.

While Archer does not plan out his plots several books in advance, he often does have one or two notions rumbling around in his brain. He will write one book often thinking that he might expand on one character or another in future plots.

Recently he created a young black woman from Albany. I particularly loved her, the introduction of such a contrast to the rural—and mostly White—personalities Joe usually interacts with.

But, he knocked her off.

A few of us had dreamed of her melding into the team, but alas, it was not to be. Such is the nature, he said, of his hearing advice versus heeding it.

In the end, of course, it is the writer who, in the isolation of creation, makes the choice, oftentimes based on factors even they can’t put into words. That being said, the value of the book club’s input was inestimable, supplying much food for thought.

I hope to go back to the group this Fall, to see how the adaptions have resounded with them.  Archer’s reviews keep getting better, and I do credit their opinions as a factor. Fresh eyes always open one’s mind to possibilities.

Mystery book clubs? We appreciate them, especially when they’re willing to offer up gloves-off, straightforward and useful appraisals. After all, if a roomful of educated aficionados can spark an idea or suggest a new direction, why not listen?

Not to mention that they can get sneak previews, some swag, a challenging evening, and awfully good eating.

Check out Archer Mayor’s essay, “Living/Writing in a World of Crime”

Comment below for a chance to win a copy of Bomber’s Moon by Archer Mayor to share with your bookclub!

Archer Mayor Mystery Book Club Comment Sweepstakes: NO PURCHASE NECESSARY TO ENTER OR WIN.  A purchase does not improve your chances of winning.  Sweepstakes open to legal residents of 50 United States, D.C., and Canada (excluding Quebec), who are 18 years or older as of the date of entry.  To enter, complete the “Post a Comment” entry at http://www.criminalelement.com/mystery-book-clubs-hands-on-gloves-off/ beginning at 5:00 p.m. Eastern Time (ET) September 27, 2019. Sweepstakes ends at 4:59 p.m. ET October 11, 2019. Void outside the United States and Canada and where prohibited by law. Please see full details and official rules here. Sponsor: Macmillan, 120 Broadway, New York, NY 10010.