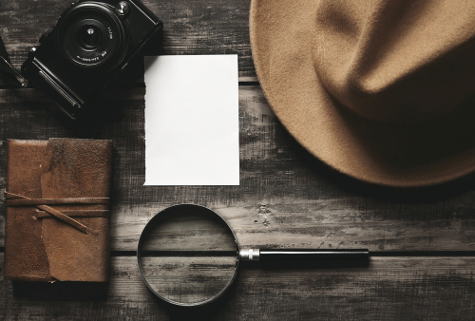 Read Brad Abraham's exclusive guest post about mysteries featuring ordinary people, then make sure to sign in and comment below for a chance to win a copy of his debut novel, Magicians Impossible!

To describe a novel as a mystery conjures images of hardboiled detectives, plucky criminologists, driven cops, and clever British pensioners. But at their heart, every book is a mystery in its own way. What story hasn’t centered on a character or characters seeking the answer to some question or a higher truth about the world or about themselves? A mystery can be set in worlds both mundane and magical and in times past, present, and future—some don’t even have a resolution at all, other than to impart some lesson on the one seeking an answer to the thing that keeps them up at night. Some don’t even need a detective.

Set in the cutthroat world of corporate recruiting, Headhunters is the twisty tale of headhunter Rodger Brown—a man who gets as much a thrill in finding the right candidate for the right job as he does in locating, stealing, and fencing paintings from many of Oslo’s wealthiest families. Roger meets Clas Greve, the seemingly perfect candidate for a high-paying client’s advertised position. But when he learns Greve had a relationship with his girlfriend Diana, Roger sabotages Greve’s chances … and unleashes a whirlwind. To say Rodger’s life soon spirals out of control is to say Norwegian winters are long and dark; Headhunters is packed with enough jaw-dropping twists and turns and “I can’t believe that just happened” moments for ten books let alone one.

This Is Sarah by Ally Malinenko

Not all crimes have a solution, and not all mysteries can be solved. Any grieving parent with a missing child knows this; sometimes, you don’t find the one who’s lost. And so is the case of Colin Leaventhal in Ally Malinenko’s This Is Sarah. The grieving, confused boyfriend of the titular figure; a teenage girl gone missing who, a year later, has yet to be found. Sarah’s disappearance is a mystery. Was she kidnapped? Abducted? Murdered? Or did she just walk away from Colin, from her sister Claire, from everything? This Is Sarah is a mystery about learning the truth about who Sarah was and finding no easy answers.

Joe R. Lansdale first introduced the not-so-dynamic duo of Hap Collins and Leonard Pine in 1989’s Savage Season, but it wasn’t until 1995’s Mucho Mojo that they really hit their stride. Twenty years down the road, it is perhaps the finest in the Hap and Leonard series and the best gateway to Lansdale’s work overall. Beginning with the discovery of a child’s skeleton in the basement of Leonard’s recently deceased uncle’s house, the amateur sleuths embark on a wild and twisty narrative that involves corrupt cops, a traveling carnival, a fire-and-brimstone preacher, and the crack house next door. It’s all anchored by the friendship between black, gay Republican Leonard and lefty, white “cracker” Hap—a friendship that has stretched to over a dozen novels and short-story collections as well as two, soon to be three, seasons of Sundance TV’s acclaimed Hap & Leonard TV series.

The Big Rewind by Libby Cudmore

The cafes and clubs of hipster Brooklyn might not seem a place for a murder mystery, yet Libby Cudmore pulls it off in The Big Rewind, which is as much about that aimless post-college drift through low-paying jobs and fractured relationships as it is about the murder of Jett Bennett’s downstairs neighbor Kit-Kat. Jett resolves to solve the murder, but before she can do that, she has to come to terms with her own life’s journey, its disappointments, and those “WTF was I thinking” moments we all share. It’s murder as metaphor for navigating those difficult post-college years and figuring out just who you want to be when you grow up after you’ve grown up (surely the greatest mystery of them all).

The Gothic Picnic at Hanging Rock details the events that occurred at a girl’s boarding school buttressing the Australian outback in 1900. On Valentine’s Day, an excursion to the local and legendary Hanging Rock ends with four girls and a teacher disappearing without a trace. Detailing the fallout and the accusations, the mystery remains unsolved at the end … depending on which version you’ve read or seen. Famously, author Joan Lindsay originally included a concluding chapter explaining the disappearance, but her editor wisely recommended she remove it. The resultant novel (and later film adaptation) was a sensation in its native land, so much so that many to this day believe the story to be based on a real-life disappearance. Reality and fiction in Hanging Rock blur as much on the page as they do off it, but like This is Sarah, it’s the mysteries without resolution that cut deepest and linger long after the book has been closed.

Comment below for a chance to win a copy of Magicians Impossible by Brad Abraham!

Magicians Impossible Comment Sweepstakes: NO PURCHASE NECESSARY TO ENTER OR WIN.  A purchase does not improve your chances of winning.  Sweepstakes open to legal residents of 50 United States, D.C., and Canada (excluding Quebec), who are 18 years or older as of the date of entry.  To enter, complete the “Post a Comment” entry at https://www.criminalelement.com/blogs/2017/09/mysterious-ways-5-books-featuring-ordinary-people-solving-mysteries beginning at 3:00 p.m. Eastern Time (ET) September 19, 2017. Sweepstakes ends 2:59 p.m. ET September 26, 2017. Void outside the United States and Canada and where prohibited by law. Please see full details and official rules here. Sponsor: Macmillan, 175 Fifth Ave., New York, NY 10010.

Brad Abraham is the author of Magicians Impossible (Thomas Dunne Books), creator of the Mixtape comic book series (Space Goat Productions), screenwriter of the films Fresh Meat and Stonehenge Apocalypse, writer on the television series Canada Crew, Now You Know, I Love Mummy, and Robocop Prime Directives, and a journalist whose work has appeared in Rue Morgue, Dreamwatch, and Fangoria. He lives in New York City.