I discovered J.D. Robb before I knew she was Nora Roberts.

My mom has been a long-time member of the Mystery Guild, and back in 1999 she gave me her booklet and asked if I wanted anything. I was looking for something new to read, and the description of Conspiracy in Death by this unknown (to me) author J.D. Robb sounded intriguing. The Mystery Guild booklet didn’t identify J.D. Robb as Nora Roberts, but I didn’t care—a futuristic police procedural? Sounded fun and different.

I remember reading this book and losing myself in the future world expertly built with lasers and AutoChefs and holos and designer drugs. Strong, independent cop Eve Dallas; sexy, former criminal turned mostly-straight businessman; insecure-but-determined partner Peabody; annoying-but-loyal Summerset; and, of course, Galahad the spoiled cat. And many more. No character is left two-dimensional, whether they’re continuing, support cast, or in only one important scene. We are immersed in the world and with the characters.

Anyway, I started Conspiracy in Death in a Sunday morning bubble bath with a mimosa … when I had two kids instead of five, I could usually sneak in these quiet moments. My bath got cold, I wrinkled up, and I took the book to my reading chair in the corner of my bedroom where I did not move for hours—not until I got to The End. Then, I did the next logical thing: I looked in the front matter to find out what other books this author wrote and why I hadn’t her of her before. Surprise, surprise! I found out J.D. Robb was in fact Nora Roberts.

Because Conspiracy was a book-club edition, the next book, Loyalty in Death, was already out in stores. I bought it at Borders (I still miss Borders), and I’ve never missed another In Death book. I'd never read the first seven books until recently, when a friend of mine (thank you Silver James!) sent me Naked in Death. I’m not one of those readers who has to read all the books in a series, and I rarely go back if I start in the middle. If I love the series, I just continue from the point I started. But Silver kept pushing me to read Naked, so I did.

I’ve been tasked with writing about my favorite five In Death books. This is an impossible task because there are very few that I didn’t love in a series that now has 44 volumes. But I’m going to try.

In no particular order: 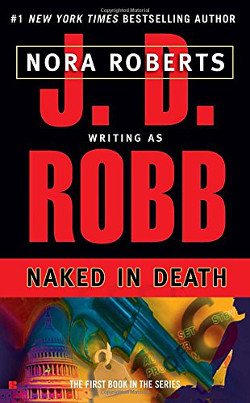 The first book in the series has everything a great romantic suspense should have: a strong, independent heroine; a smart, dashing hero; a compelling plot; organic conflict (and what’s better than the hero being the #1 murder suspect for the heroine?); and great storytelling. Naked sets up the world as we know it for Eve and Roarke, and nothing is better than their first meet. For that alone, Naked has to go in the top five. It’s the beginning of something great. 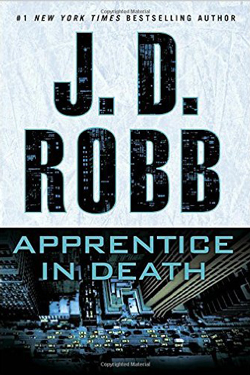 The In Death series is one of the few series that—even after 44 books—still rocks. In fact, time and again J.D. Robb proves that she is the master of all storytellers because this long-running series has never failed to entertain and has never gotten old. Case in point: Apprentice in Death.

It just came out last fall, and I would argue that it’s one of the best books to date. A sniper kills three people at a Central Park ice rink with three impossible shots … impossible for most people. It’s up to Eve Dallas and her genius husband Roarke to figure out not only how, but stop the killer before he targets anyone else. This race-against-time thriller has everything I love in a great book: a smart, motivated killer and very real, very viable threat. Plus, a darkly fun twist. 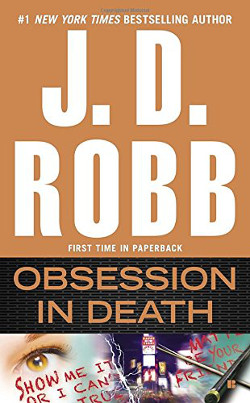 Another more recent addition to the series, Obsession in Death sees Eve herself becomes the obsession of a killer. The prologue opens in the killer’s point of view and immediately hooked me, but I guarantee this is one of those books you’ll be biting your nails as you, along with Eve, try to figure out who’s obsessed with her—who knows that they are the “truest of friends.”

Killing was easier than I thought it could be, and a lot more rewarding. I finally feel as if I’ve done something important, something that deserves real attention. All my life I’ve tried, done my best, but no one ever truly appreciated my efforts, really saw me for who and what I was.

Obession was one of the rare mysteries where I didn’t figure it out before the main character, but once revealed, everything clicked into place. I love that! 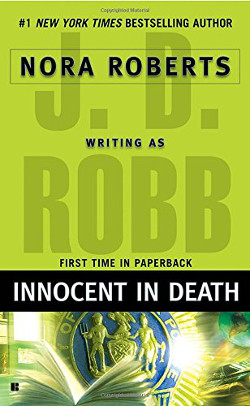 One of J.D. Robb’s trademarks is conflict—real, organic conflict. In a long-running series where your two main characters are married, keeping the relationship growing and evolving is not only important, but difficult. There is nothing worse than contrived conflict.

J.D. Robb doesn’t force conflict between Eve and Roarke—not every book has them at odds. Some books they work amazingly well together and the conflict comes outside of their relationship; other books, they are working through very real problems with marriage and careers and danger.

In Innocent in Death—which has to be near the top of my top five list—Roarke’s girlfriend from his past criminal life has returned. The story starts with the murder of a school teacher, someone everyone liked who was so innocuous that Eve can’t begin to imagine who would want to poison him with ricin.

I truly felt, for the first time in the entire series, that Roarke and Eve might not make it. The complex emotions, the feelings of anger, fear and betrayal on both sides, the fact that when they tried to talk neither of them understood the other. I felt for both of them—and I feared for them.

But in the end, they were stronger than ever … because the promise of romantic suspense is that you can’t tear apart—permanently—your hero and heroine. When you have a character with such a rich and complex backstory, one that informs them and makes them who they are like Eve Dallas, there has to be a book that addresses those demons. New York to Dallas is that book.

Eve is forced to confront her past. It starts with the escape of one of the most violent predators Eve put away early in her career. He wants revenge, of course, but this is far more than an escaped convict revenge story. Eve has to face some brutal truths in her past—violence done to her and how she contained it. Her nightmares become worse as she tries to make sense of the insensible. And, through it all, Roarke is her rock.

Truly, you can start the series at almost any book, but if you don’t want to invest the time in all 44, start with New York to Dallas. I guarantee, you’ll want to go back and read everything that came before it.

So, this list was supposed to be only five books. But I have more than five favorite In Death books. How in the world can I say that these five—Naked, Apprentice, Obsession, Innocent, and New York to Dallas—are the best five?

I went through all the books on my bookshelf (yes, I own them all except books 2–7), read the descriptions, and thought, “Oh, I loved this!” … I ended up with a stack of 21 “favorites,” and I had to go back and cull them.

So, I have a couple honorable mentions—books that should be in the top five but didn’t fit because, well, five.

The hallmark of a great, endearing author is writing consistently good books. After more than 150 novels, Nora Roberts—and her alter ego J.D. Robb—are still at the top of “their” game. And the In Death series keeps getting better. I can’t wait for Echoes in Death. Time to buy a bottle of champagne for my Sunday mimosa and curl up with what I know will be a great book.

Check out our review coverage for the entire In Death series!

To order a copy of Echoes in Death, visit: