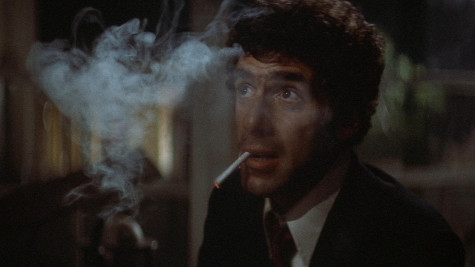 Read why Peter Blauner considers Robert Altman's The Long Goodbye to be his favorite crime movie, and then make sure to sign in and comment below for a chance to win a copy of Blauner's sweeping crime novel, Proving Ground!

The Long Goodbye isn’t the best crime movie ever made. The Godfather and The Godfather Part II are hard to beat in that category. It isn’t the best film Robert Altman ever directed either; McCabe and Mrs. Miller and Nashville are more likely contenders. And it certainly isn’t the best adaption of a Raymond Chandler novel—how could anyone top Bogart and Bacall in The Big Sleep? But it was the right movie at the right time for me.

It came out when I was 13 years old, a big sluggish kid with a keen interest in baseball and not much else. An early enthusiasm for reading had started to sputter out, thanks to premature exposure to the Bronte sisters, disruptions at home, and an excess of wretched television. I think the only book I’d read cover-to-cover up to that point in 1973 was Jim Bouton’s tawdry baseball exposé, Ball Four, with its tales of pill-popping and Baseball Annies.

I was deeply suspicious of the adult world, which seemed corrupt and confusing to me (I grew up in Manhattan), but my only entry point for understanding came through some of the more sophisticated R-rated movies of the time, which I could get into because I was already shaving. I somehow learned that Bouton was in a movie and took my $3 allowance down to the Baronet Cinema on Lexington Avenue to see what it was about.

As anyone who’s seen the film can tell you, Altman was not paying slavish homage to the genre. The basic plot updates Chandler’s story about Philip Marlowe doing a favor out of loyalty for his friend Terry Lennox (played by Bouton in the film) and getting beat up, arrested, and caught up in nefarious doings by decadent Californians when all he wanted to do is get the right cat food for his cat.

Elliot Gould plays Marlowe as a stumblebum shlub, mumbling and shrugging at a world that he doesn’t belong in. Big ID checkmark for a misfit kid. Marlowe keeps saying “okay by me,” even though things clearly aren’t.

Along the way, he runs into Sterling Hayden playing a raging alcoholic, Henry Gibson from Laugh-In playing a sinister rehab shrink, a very young Arnold Schwarzenegger (already offering intimations of a more brutish future), Mark Rydell committing an act of truly shocking violence, and Nina Van Pallandt, whose golden smile and air of glamorous intrigue (she was involved in a real-life scandal involving a fake Howard Hughes memoir) sealed the enchantment deal for me.

I’d like to think I also appreciated the jazzy soundtrack and nostalgic color scheme, but really I was just a kid getting off on the jaded atmosphere. But I think what struck me the most was that, at a certain point, it wasn’t okay with Philip Marlowe anymore. After all the muttering and shrugging, this rather Jewish version of Marlowe’s hero finally decides enough is enough and erupts out of a personal code of honor. And he doesn’t do it in a cornball movie-hero way like John Wayne, but with a kind of bitter irony that seemed completely true and appropriate to the world I was living in.

From the film I went to Chandler’s novel and discovered all that lush gangster poetry he wrote. And from reading, I eventually went to writing. So basically, a movie about a guy trying to feed his cat changed my life. And I’ve never even had a cat. Go figure. What goes on in the dark is always a mystery.

Comment below for a chance to win a copy of Proving Ground by Peter Blauner!

Proving Ground Comment Sweepstakes: NO PURCHASE NECESSARY TO ENTER OR WIN.  A purchase does not improve your chances of winning.  Sweepstakes open to legal residents of 50 United States, D.C., and Canada (excluding Quebec), who are 18 years or older as of the date of entry.  To enter, complete the “Post a Comment” entry at https://www.criminalelement.com/blogs/2017/04/my-favorite-crime-movie-comment-sweepstakes beginning at 2:00 p.m. Eastern Time (ET) April 26, 2017. Sweepstakes ends 1:59 p.m. ET May 10, 2017. Void outside the United States and Canada and where prohibited by law. Please see full details and official rules here. Sponsor: Macmillan, 175 Fifth Ave., New York, NY 10010.

Peter Blauner is an Edgar-winning, New York Times-bestselling author of Slow Motion Riot and The Intruder. He spent the 1980s covering crime, politics, and other forms of socially-abhorrent behavior for New York magazine. For the past decade he has been working in television, writing for several shows in the Law & Order franchise and the CBS show Blue Bloods. He was born and raised in New York City and currently lives in Brooklyn with his wife.